Girls of the Sun

Director and co-writer Eva Husson awkwardly combines taut action with treacly melodrama in “Girls of the Sun,” inspired by the bravery of female Yazidi fighters who dared to take on ISIS invaders in Iraqi Kurdistan.

Husson’s second feature couldn’t be more different from her debut, “Bang Gang (A Modern Love Story),” which followed a group of bored, wealthy teenagers taking part in a series of increasingly wild afternoon sex parties. That film pulled off a tricky balance that eludes Husson here: It managed to be light and gauzy but also immediate and startling. With “Girls of the Sun,” she handles the action sequences with a deft hand and a feel for tension, but her character development is woefully lacking to the point of empty cliché.

Still, her intentions are unquestionably admirable, as is her drive to put a human, female face on a subject that might seem too complicated, too far away. And she creates enough individual moments of striking beauty and gripping suspense to make you wish the film as a whole were more consistent.

Golshifteh Farahani stars as Bahar, the leader of a Kurdish battalion composed entirely of women who plan to take back their village from Islamic State terrorists. Their husbands have been rounded up and killed. Their sons have been taken from them and turned into tiny soldiers. Many of these women and girls have been raped, sold off and turned into sex slaves. That they have summoned the strength not just to survive but also to fight for their homeland and people is a miracle in itself. But we don’t get to know these women as well as we’d like. Aside from Bahar, a former lawyer turned reluctant warrior, and her comrade Lamia (Zubeyde Bulut), who’s on the verge of giving birth in the middle of this war zone, the supporting players are essentially interchangeable.

Our conduit into this dangerous and deadly world is Mathilde (Emmanuelle Bercot), a veteran French journalist embedded with Bahar’s team. The eye patch she wears, covering the left eye she lost to shrapnel on a previous assignment, is an instant signal of her toughness and dedication. She is stubborn and fierce, respected by her peers but ultimately a loner. But Bercot is also saddled with some of the clunkiest dialogue as she’s stuck explaining what’s at stake.

While Bahar and Mathilde are both naturally guarded with each other at first, they eventually bond over the loves they’ve lost in bloodshed and the children they haven’t seen in far too long. This leads to a long flashback which eventually catches us up to how Bahar came to be where she is at the film’s start. It is relentlessly bleak – which is unavoidable, given the subject matter – but it’s also too often a melodramatic slog, smothered in a suffocating score.

And in structuring the narrative this way, Husson and her co-writer Jacques Akchoti cause of a bit of a disconnect. Mathilde had provided our entryway, and when we lose track of her, the movie begins to feel a bit scattered. At the same time, we don’t feel nearly as invested in her own sense of loss and regret as we should because she is such a fleeting figure over the course of the film. So when Mathilde delivers her big speech toward the end about the nature of truth and her role in presenting it, and later when she wraps everything up over the closing credits with a poetic monologue, her words ring hollow.

Still, there’s power in individual moments, and Farahani’s performance as a whole is quite compelling. She reveals both ferocity and grace in the pep talk Bahar gives her troops before leading them in a siege on enemy headquarters, and she indicates a lifetime of sadness in the slightest flicker of an eye. Husson tries to get her arms around a lot in with unwieldy results in “Girls of the Sun,” but she does draw some inspiring moments from her actresses. 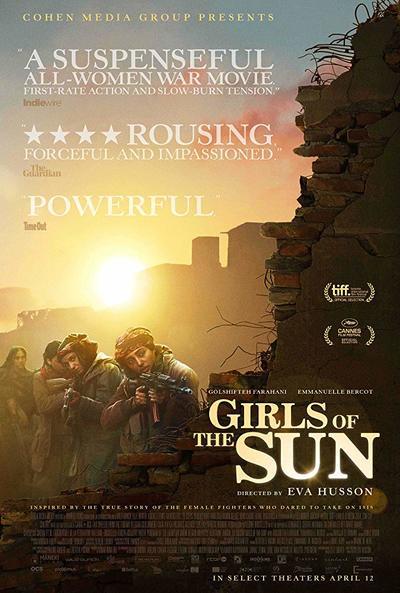