With the likes of “Amityville: The Awakening,” “Assassination Nation” and “Ride” already under her belt, the multi-faceted young actor Bella Thorne left her glittery Disney Channel label behind and graduated from family-friendly fare to darker material some time ago. In writer/director Chad Faust’s “Girl”—a wobbly and desperately unimaginative mesh-up of contemporary noir and a Southern-fried tale of ancestral trouble—Thorne continues to broaden her range, serving up a quiet performance of emotional burden and impressive physicality.

Except, there is also a weary sense of broadness to Thorne’s acting here as her character navigates the grimy nooks and crannies of her childhood small town she returns to years later for vengeful reasons. But even though Faust seems to have intentioned “Girl” to be Thorne’s “Winter’s Bone” of sorts—a gritty yarn of Americana charged by a serious actor with a range of visceral and bodily muscles—the lack of specificity in her performance is hardly the actor’s fault. And that’s because like everything else in “Girl,” Thorne’s character (so indistinct that we simply get to know her as just Girl, nothing else) feels all too generic, with an unoriginal back-story made-up of familiar tropes.

Those clichés involve a difficult Mama and an absent father who apparently used to be a horrific abuser of his family. Filled with pent-up rage consequently through all the grotesque daddy stories she grew up with, Girl (who happens to be deadly with a hatchet) strolls into her old town of gothic hues one day, with a murderous mission on her mind. What she finds there is once again as imprecise and nonspecific as they come: creaky homes, grimy streets, and save for a barman here and a random neighbor there, surly and miserable denizens displeased with the newcomer’s presence. Completing the nondescript picture is Mickey Rourke’s hostile sheriff with a hoarse voice and leathery skin and his scheming, off-putting brother, ironically named Charmer (played by Faust himself). Despite all the odds stacked against her, Girl still pledges to kill her daddy, only to discover he was already murdered in what looks like the job of a professional with scores to settle.

Through this twist of affairs, Faust manages to keep the story engaging enough for a short while, milking the newfound suspense he’s forged for all it’s worth. Who killed the girl’s father? Did he have funds saved up somewhere? How are Charmer, the Sheriff, and a helpful neighbor named Betty (Lanette Ware, supplying the film with a much-needed dose of gravity) involved in the set-up? Since Faust falls short of supplying us with reasons to care for these individuals, none of the answers matter in the end. Similarly, the big reveal the filmmaker saves for the finale—a philosophical declaration about truly knowing your family—fizzles without reaching any sentimental resonance, before we can even let out mild gasp of surprise.

On the other hand, Faust at least keeps the action interesting enough. He puts a beaten, bruised, and shot Thorne through the wringer and the fearless actor proves to be more than game for the extremes in Faust’s follow-the-money cat and mouse game. Sadly, the film’s dreary look and overall lack of color weighs down whatever energy Thorne projects with her vigorousness. There can be real substance to an austere small town story of crime and justice. But the ultimately shallow “Girl” proves that when not backed up with some real character work and visual style, bleakness alone doesn’t automatically mean depth or significance. 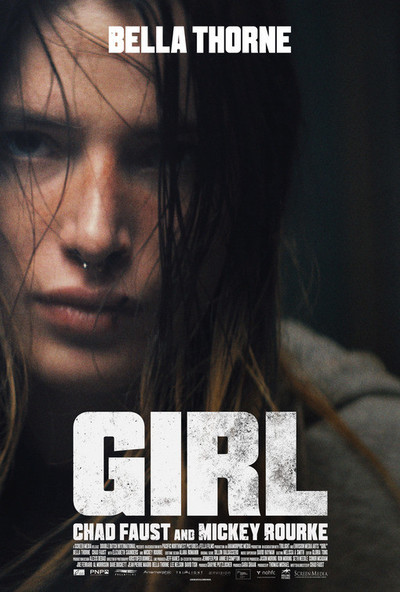