Among the many gifts bestowed by cinema, perhaps the most profound of all is its ability to provide us with epiphanies that may be difficult to acquire from everyday life. Taking a breather from the routine grind of have-to’s and deadlines, we are invited to pause and meditate on the narrative presented onscreen, enabling us to connect with certain truths embedded within its structure that we are often too busy or worn down to consider.

This happened to me on a recent plane ride while watching Susan Lacy’s masterful documentary, “Jane Fonda in Five Acts,” where the screen legend makes a transformative discovery about her late mother, who she felt never loved her. Only after learning of the bipolar disorder that drove her mother to suicide was Fonda able to reach a sense of closure about both of her distant parents. “Their incapacity to love wasn’t because you weren’t worthy of love, but because they too have been wounded, and then you can forgive,” Fonda notes. “It goes from one generation to another, and somebody’s got to break the cycle.” Listening to her words, I suddenly felt years of pent-up bitterness lifting off my own heart and evaporating into the ether.

“Flower & Garnet,” the 2002 directorial feature debut of Keith Behrman, contains an encounter between a damaged father and his neglected son that achieves the sort of catharsis Fonda had been seeking for decades. Paralyzed with grief over the death of his wife, the reluctant parent must learn to accept this tragedy and embrace his child in every sense of the word. When his son opens up about not feeling wanted, the man breaks down and admits, “I wanted my wife back. It wasn’t your fault. I’m sorry I never told you that.” “Giant Little Ones” is Behrman’s first narrative feature since “Flower & Garnet,” and it builds a similarly cumulative power, though in its early scenes, the film wasn’t grabbing me. Something felt off about the teenage characters from the get-go—they all look a touch too photogenic and speak in language that sounds more written than observed.

The protagonist, Franky (Josh Wiggins), has dashing good looks, a pearly white grin and a perpetually genial demeanor. He’s too polite to inform his pretty girlfriend, Priscilla (Hailey Kittle), that his attraction to her is waning, and his assurance of, “I’m totally into you,” reeks of forced sincerity. Something is nagging at him that defies his comprehension, and it’s to the credit of Behrman’s script that this “something” is never flatly defined. As soon as Kyle MacLachlan turned up as Franky’s father, Ray, everything that had initially puzzled me about the film began clicking into place. Not only is this kid a chip off the old block, he’s also prone to making awkward fist bumps, the 21st century version of Agent Cooper’s upturned thumb.

Even the occasional stiltedness in the dialogue began to sound more natural, causing me to recall how teens in my generation often imitated what they saw on television in order to appear adult. I’ll never forget the time a girl told me, “I can’t see you anymore because I’m falling in love with you,” only to hear the identical line uttered on a popular teen soap the next day. Numerous sections of the film, particularly in the first half, fit snugly into the category I’ve dubbed “earbud cinema,” where the soundtrack routinely drowns out the character interactions, serving as an aural lubricant for moments in which the dialogue is somehow deemed too mundane. This can quickly become a tiresome storytelling crutch in lesser hands, yet Behrman turns it into an intriguing motif as the picture progresses.

It is the music filling Franky’s ear canal that allows him to escape, clouding particular aspects about himself that he’s found difficult to face. He feebly attempts to explain why he’s ill-at-ease in Patricia’s presence, blaming it on his annoyance at how she plays with her hair. Yet as we see during the squirmy moment when she cuddles up to him on the couch, Franky is every bit as inclined to fiddle with objects—namely his earbuds—in order to find an outlet for his anxiety. As the characters start letting their guard down and become honest not only with themselves but each other, every scene rang true to such an extent that I found myself overcome with elation. What starts as a rather typical indie drama about a young man inching his way out of the closet ultimately proves to be a far more complex and rewarding ode to the fluidity of identity.

Exhilarated by their impeccably orchestrated retaliation against some homophobic jerks, who taunted them from the cowardly perch of their car in a convenience store parking lot, Franky and his best friend, Ballas (Darren Mann), have a sexual encounter in the murky shadows of a bedroom. Editor Sany Pereira cuts to this scene without any establishment of foreplay to accentuate its sudden, primal nature. It’s not long before Ballas distances himself from his feelings, claiming Franky took advantage of him, a lie that spreads through the student body like wildfire. The humiliated boy’s sole ally turns out to be Ballas’ sister, Natasha (Taylor Hickson of “Deadpool” fame), who’s all too aware of her brother’s tendency to deny having any part in occurrences he himself instigated.

Evan Marsh, who was so winning in Amy Jo Johnson’s “The Space Between,” is equally impressive here as Connor, a loathsome bully so uncomfortable in his own sexuality that he feels the need to rob others of their contentment, demanding that the shower rooms be segregated during swim practice. The tables poignantly turn when Franky ends up alone in the same parking lot, and on the receiving end of violence administered by Ballas, with the help of Connor. Ballas’ instinctual decision to turn and punch Connor speaks volumes about the self-loathing that has made him favor alienation over any form of human connection. Most startling and refreshing of all is the erotic connection Franky shares with Natasha, thus obliterating any standard constructs regarding his orientation.

After Franky learns of the abuse endured by Natasha that has made her want to avoid sex for the time being, he responds with understanding and benevolence. This leads to a wonderful scene between him and Natasha’s father (Peter Outerbridge), who questions the boy about the amount of time he’s spending with his daughter. We’re awaiting him to unleash the standard “Stay away from my girl!” diatribe, yet instead, he informs Franky with quiet urgency that Natasha has been through a lot and must be treated with the utmost care. This comes as a surprise to Ray, who is perched on the other side of the table, ready to fiercely defend his son against all hateful attacks. It’s here we are reminded of the immense power MacLachlan derives from stillness, which he utilized brilliantly—and fearsomely—in “Twin Peaks: The Return.” Yet in “Giant Little Ones,” the actor delivers one of his most touching and tender performances to date, as a man whose sexuality remains a mystery to his ex-wife (Maria Bello), who still thinks her husband just decided to be gay one day, and leave her for another man.

When Franky finally decides to pay Ray a visit at his house, after so much self-imposed estrangement, the conversation that occurs there between father and son is, in many ways, the heart of the film. The hard-won wisdom that Ray shares is as illuminating and healing as the monologue delivered by Michael Stuhlbarg’s more bittersweet father figure in “Call Me By Your Name,” encouraging his son to pay attention to what he’s drawn to, while keeping in mind that “it doesn’t matter what you call it.” Franky’s proudly queer friend, Mouse (Niamh Wilson), is drawn to wearing a strap-on beneath her jeans, and in the film’s funniest sequence, her sexual curiosity inspires her to interrogate her longtime chum about his genitals, resulting in the sort of frank yet endearing exploration that puts sophomoric sex comedies to shame.

I’ll confess that I became so enamored with Behrman’s film that when it came to a perfectly pitched conclusion, cutting to black at the precise right moment, I felt like applauding. This is not a film that ends with contrived reunions and shared, meaningful nods. It acknowledges that some frayed bonds may never be mended, while arriving at a deeper level of satisfaction, enabling its hero to not only find forgiveness within his grasp, but also self-acceptance. I imagine many young people will feel an enormous weight lifted off of them after watching this movie, as the stigma limiting their own personal expression starts to dissolve. What a gift. 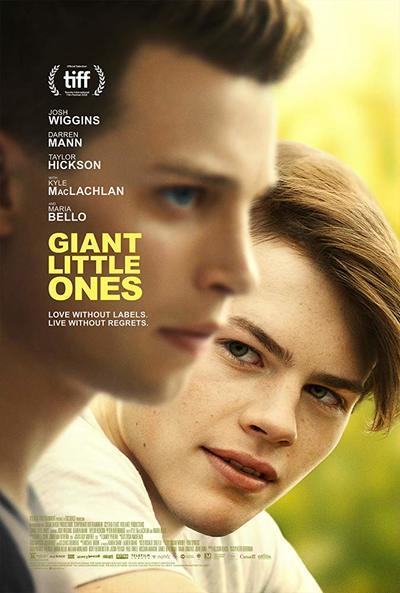 Rated R sexual content, language and some drug/alcohol use  all involving teens