If you have fond memories of anthology horror films like “Creepshow” or long for the days when stories of the supernatural weren’t reliant on jump scares and increasingly stupid behavior from a film’s protagonists, then I have a pretty wonderful little genre treat for you. Andy Nyman and Jeremy Dyson’s unexpectedly effective “Ghost Stories” reminds me of the horror films I loved as a kid without feeling like purely a retread of them. It’s inspired by everything from Robert Wise to Stanley Kubrick to Stephen King, and finds just the right balance between being a fun dissection of belief in the supernatural with honest-to-goodness scares. Like the subgenre that inspired it, "Ghost Stories" is just twisted enough to be humorous, but doesn’t shy at all on the creepy factor.

Co-director/co-writer Nyman also stars as Phillip Goodman, the host of a TV show that’s designed to debunk belief in the other side. The show within the film is called “Psychic Cheats,” but Goodman doesn’t just tear down the deceitful practices of charlatans who claim psychic powers—he takes a certain kind of conceited glee in what he does that’s almost unsettling. In the opening scene, he’s pretentiously debunking an alleged psychic and not really noticing the woman in the audience with whom the con artist was conversing who is clearly emotionally wrecked. From the beginning, it’s clear that Goodman is on a pedestal from which he needs to be righteously knocked.

And that’s exactly what’s about to happen. Goodman is contacted by Charles Cameron, a paranormal investigator from the ‘70s who inspired him as a boy. Cameron is Goodman’s role model, a similar practitioner of deconstructionist television, a man who disproved supernatural phenomena. Cameron has been long-considered dead, but he’s actually living in a mobile home, clinging to life. He tells Goodman that he has changed his mind about the other side and that there are three cases that made him do so, asking Goodman to look into this trio of unexplainable supernatural happenings. And, so, the rest of the film features Goodman finding the three haunted men, including a night watchman at an abandoned asylum, a young man who gets into a horrific car accident in the middle of nowhere, and Martin Freeman as a soon-to-be father who experiences a poltergeist.

The structure of “Ghost Stories” allows for three relatively standalone, self-contained short films, but they all work from a similar thematic foundation. All three of these cases involve people who have real-life issues that could be used to explain away their hauntings as tricks of the mind or hallucinations due to stress. For example, the subject of the first case had a wife who died from cancer and a daughter with something he calls locked-in syndrome. It’s no wonder he might see something that’s not there. But Goodman learns that these excuses about why people see ghosts don’t explain everything away and that his own past influences why he does what he does. There are really four narratives in “Ghost Stories,” and they’re all intertwined in a thematically satisfying way that’s rare for anthology horror films.

There’s also just some really effective genre filmmaking going on here. Nyman and Dyson understand the old-fashioned ghost story storytelling that’s so effective in that it’s not based on jump scares but simple, relatable elements. The first story within a story about the night watchman at the asylum thrives on so many classic horror elements like faulty power, flashlights that go out, and footsteps in the dark. It’s refreshing to see horror filmmaking that owes more to classics like “The Haunting” than the modern Blumhouse-inspired era of jump scares and gore. When each of the individual stories climaxes, it can be a bit of a letdown, but the way that Dyson and Nyman allow suspense to build in each story is remarkably effective. And then Martin Freeman pops up in the final act to inject it with a new, unexpected energy.

Horror has a long legacy of stories of people who think they know all there is to know about the supernatural, and learn about their ignorance the hard way. “Ghost Stories” doesn’t reinvent the wheel in any way, but it owes a debt to films that modern genre filmmakers might have forgotten. In that sense, it feels both old and new at the same time. And, perhaps most importantly, it’s honestly scary in ways most indie horror doesn’t even try to be. It’s the sound of a creaking door, footsteps when no one else is home, the sudden drop of temperature in the center of a room—these are ghost story elements that will always be timeless, and it’s so refreshing to see a modern horror movie that knows how to use them as well as “Ghost Stories.” 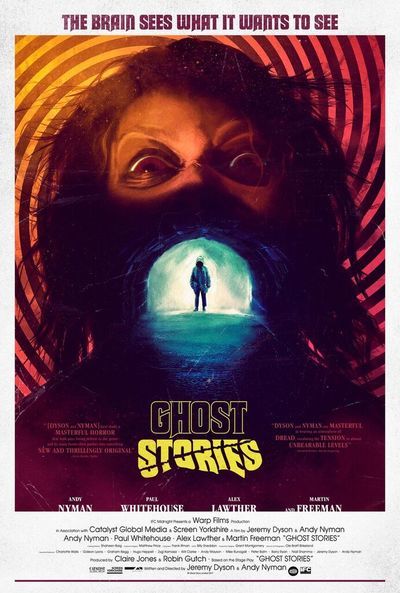