The British horror-comedy “Get Duked!” is most charming as a teen hangout comedy, but it's not so memorable as a superficially topical anti-Brexit riff on “The Most Dangerous Game.” In “Get Duked!”, a quartet of teenage boys trek through the Scottish Highlands, and are summarily hunted for sport by a pair of mask-wearing, purity-obsessed aristocrats. The kids are alright, so there are thankfully several funny scenes featuring all four teenagers, though their group is often funnier than whatever situational peril they’re facing.

That, and a general lack of urgency are the main things holding “Get Duked!” back from being as good as it is promising. You don’t have to read the movie’s press notes to know that writer/director Ninian Doff tried to make a politically engaged movie that was more fun than didactic. Still, knowing that Doff feels “we need to make protest movies that don’t feel preachy” helps to explain why “Get Duked!” works best when it’s least serious.

Doff thankfully wastes no time in establishing (or dispensing with) his movie’s high-concept premise: a trio of Glaswegian juvenile delinquents—Dean (Rian Gordon), DJ Beatroot (Juneja), and Duncan (Lewis Gribben)—are forced to undertake a miles-long schlep, I mean team-building exercise through the Highlands with relatively straight-laced Ian (Samuel Bottomley), who hopes to add more padding to his college application. The lads can’t use their cell phones—“There's no reception in the Highlands”—and are soon preyed upon by the Duke and the Duchess (Eddie Izzard and Georgie Glen), a couple of generically out-of-touch killers who are all kids these days this, and purity of the British bloodline that.

“Get Duked!” is a social commentary, you see, though it’s not very serious about it, as Doff notes. For example: the Duke and Duchess establish their sociopathic, “The Wicker Man”-adjacent paganism with an ritualistic auto-tune rap, which is ostentatiously juxtaposed with DJ Beatroot’s boisterous and relatively engaging freestyling. You can also tell that Doff is down (ie: up) with DJ Beatroot and his friends based on the movie’s ostentatious use of hip-hop cues from Danny Brown and Run the Jewels: “Ain’t It Funny” and “Legend Has It,” respectively. Both songs are great—and Doff did direct the award-winning music video for RtJ’s “Love Again”—but using them as leitmotifs to puff up DJ Beatroot and his friends is the sort of pandering that begs to be mocked with Gen Z’s answer to my generation’s already dated “Ok, Boomer” and “How do you do, fellow kids?” memes.

Doff’s tendency of presenting DJ Beatroot and his friends as harmless knuckleheads invites unfortunate comparisons to Mr. Carlyle (Jonathan Arris), the boys’ stuffy, youth pastor-esque chaperone. Carlyle abandons the boys, thinking that if he leaves them alone, they’ll be forced to bond, cooperate, and build character. Doff similarly tends to let viewers fill in most of the gaps where his kids’ personalities should be. There isn’t even much of a generic clash of personalities between Ian and his reluctant hiking buddies. All we know about DJ Beatroot’s group is that they’re not particularly bright, nor is their juvenile behavior especially menacing: their rap sheets are presented in jittery, hyper-edited mini-montages, and are mostly defined by, uh, bathroom arson (both Dean and Duncan try to set their feces ablaze). Boys will be boys, and that’s presumably ok since these boys aren’t so bad, especially when compared with the Duke and Duchess’ tortured, hatefully stupid received wisdom, or the local cops’ insensitivity and careerist ambitions.

No wonder that Doff mostly focuses on DJ Beatroot, an exceptional protagonist defined by his delusions of grandeur and not his general uselessness. DJ Beatroot’s self-image as “the future of hip hop” is mostly funny for the way he unwittingly defines himself against his peers, like when he boasts about having performed across America, and Duncan reflexively asks if that trans-national tour happened to coincide with his family’s recent trip to Disneyland. There’s also some played out, but occasionally effective humor about DJ Beatroot’s bewildering rap name—“I just can't imagine a hyped up audience chanting it”—as well as a hysterical routine about DJ Beatroot’s unexpected use of the word “orienteering.”

The best jokes in “Get Duked!” are less about youthful rebellion, and more about how dumb today’s youth, much like every other generation’s youth, often are. There’s an unexpectedly funny, though sometimes drawn-out, subplot involving DJ Beatroot’s mixtape, which finds its way into the hands of some local Highlanders, and a few affectionate jabs at the kids’ white privilege, such as it is. I’m especially fond of the scene where Duncan insists that nothing’s going to happen after Dean admits that he downloaded a copy of The Terrorist’s Handbook (on Duncan’s home computer). “You're the whitest white guy I know,” Duncan says. “You're basically al-beano. I wouldn't worry about it.” At its best, “Get Duked!” is both funny and laid back, not either/or. 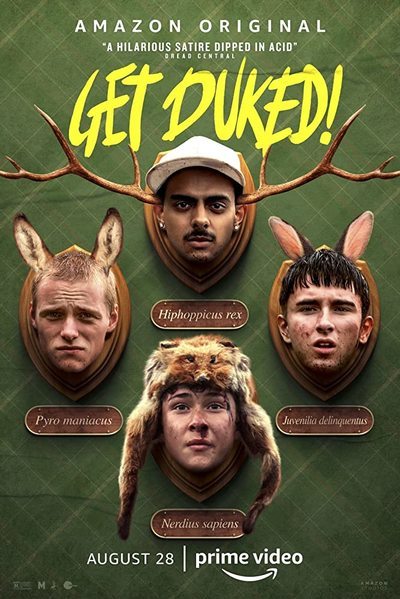 Rated R for drug content, language throughout including sexual references, and some violence/bloody images.

Eddie Izzard as The Duke