“Gaza Mon Amour” is a love story, as the title implies, but it is both romantic and unrequited. In the former angle, this is a delicate, amusing portrait of what longing looks like in the latter half of life, when so many doors are being closed in one’s face that the prospect of an open one seems like a mirage. In the latter, this is a sly critique of the limitations placed upon Palestinian lives by the Israeli government, the international community, and sometimes even their own representatives, and the way one’s love of country is flattened by the whims of others. Both approaches generate stunning moments of incisive poignancy captured by the masterful Salim Dau and Hiam Abbass, and directors and writers Tarzan and Arab Nasser pull off a delicate balance in a film that is both achingly astute and unexpectedly funny.

Palestine’s official entry for Best International Feature Film at the 2022 Academy Awards, “Gaza Mon Amour” benefits from the decades of experience brought by Dau and Abbass. Their nuanced performances build in backstories for characters who live firmly in the present, in today’s Gaza, with all the challenges and frustrations that brings. Dau, so fiery and magnetic in the recent “Oslo,” is gentler and softer here, more pulled into himself and more mischievous; a scene of him dancing to love songs while frying fish is both joyous and devastating. Abbass, who has gained a new cadre of fans thanks to her excellent work on HBO’s hit drama series “Succession,” is a true One Look Actress. With minute differences in her gaze or head tilt, she communicates disappointment, resentment, amusement, and satisfaction. Individually, Dau and Abbass are precise; together, they’re wonderfully in tune.

The pair portray Issa (Dau) and Siham (Abbass), respectively. The 60-year-old Issa is a fisherman who every night shows his permit to the authorities and goes to work on his fishing boat, where he brings in a meager catch that he sells at the market. It’s there that he often sees Siham, a widow who lives with her divorced daughter Leila (Maisa Abd Elhadi). The two work as seamstresses at the women’s clothing store, with Siham practically running the business that is about to cut her hours because of rising prices and a lack of customers, and Leila dreaming of a new start at the local university.

In fact, practically everyone is dreaming of starting afresh, and they consistently bump up against the boundaries of such longings. Issa admires Siham from afar and keeps working on the confidence to pursue her, while his younger sister Manal (Manal Awad) instead pushes her own choices for a wife upon him. (Dau’s cheeky line delivery of “You think I’m out of date?” is a perfect encapsulation of his impish charm.) Issa’s friend Samir (George Iskandar) plans on cashing out his life savings and making the nearly impossible journey to Europe. “When will this shitty life be over?” he complains after yet another night of cutoff electricity, Israeli strikes, and no sales at his store. And even Siham, who is resolutely practical, allows herself some fantasizing in the form of a second marriage for Leila—or at least a career for her daughter that won’t grind her down, as Siham has been.

All of this is grounded dramatic stuff, and the Nassers thoughtfully build in snippets of dialogue or visual language that convey how life is lived under stifling conditions: portraits of deceased relatives on the walls of people’s homes, Siham rolling out bread by flashlight, a news report in the background about Hamas, the international soap operas, movies, and concerts that Siham and Issa watch on home video. When all of that is in place, “Gaza Mon Amour” dares to get a little weird: Issa finds a large, nearly life-size statue one night underwater, and it is decidedly, obviously phallic—so much so that he tosses a coil of rope on top of its groin area to temper his initial discomfort.

The unexpectedness of this discovery, coupled with the increasingly goofy way everyone treats the figure, provides a through line of satire to a film that otherwise could have been overwhelmingly bleak. The way Issa pauses before he calls a particular part of the statue its “item” is a recurring moment of silliness that punctuates the realistic gloom otherwise permeating “Gaza Mon Amour,” and there is mellow humor elsewhere, too (a too-short pair of pants, a wet dream and the brusquely defensive line “It happens”). Both in its realism and absurdism, “Gaza Mon Amour” wonders what love is, and compels us to consider the same question. Is it someone holding an umbrella for someone else? Is it a gift left for a friend? Is it a meal cooked together? How do all of those things combine to make a life worth living, in a place where others have made survival so hard? Dau and Abbass are lovely together in a film with just as much bite as heart. 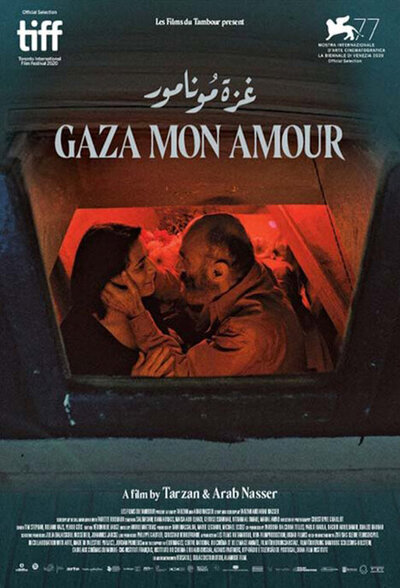