Mona Juul (Ruth Wilson) makes her husband Terje Rød-Larsen (Andrew Scott) repeat these words—forces him, really—just before their "guests" arrive at Norway's Booregaard Manor. This is no cocktail party. The guests come from both sides of one of the most intractable conflicts of the 20th- and 21st century. The Norwegian couple, without official government approval, opened up secret back channels, bypassing the traditional diplomatic process. Under the auspices of the Norwegian Ministry of Foreign Affairs (where Mona is employed) and Fafo Foundation (Terje's think tank), the couple hope to "facilitate" a dialogue between Israel and the Palestine Liberation Organization (then exiled in Tunis). Mona and Terje will not insert themselves into the process. They will "facilitate only." The result of all of this, of course, were the 1993 Oslo Peace Accords, and the subject of HBO's "Oslo," premiering this weekend.

The guests arrive with no diplomatic fanfare, no security detail. Terje picks everyone up in a rental car. Four people gather in the impressive foyer: two professors from the University of Haifa, Yair Hirschfeld (Doval'e Glickman) and Ron Pundak (Rotem Keinan), and, on the opposite side, Ahmed Qurei (Salim Dau), the PLO Minister of Finance and his liaison Hassan Asfour (Waleed Zuaiter). The atmosphere is grim and suspicious. Terje gives a nice speech about how here, they will all be "friends." He has ordered cases of liquor to "facilitate" the friend-making process, which works at first, albeit with a few awkward hiccups. A small conversation about their childhoods is derailed when the Marxist Hassan says, haughtily, "The petty bourgeois construct of family does not interest me." Well, alrighty then! Sometimes they shout at each other, sometimes they burst into laughter, all as Mona and Terje hover on the sidelines, watching anxiously from the doorway, like nervous parents afraid their kids' slumber party is going to degenerate into a ribald game of spin-the-bottle.

After the first round of talks, the Israeli professors are replaced by more serious "players" further up the chain of command, Uri Savir (Jeff Wilbusch), Director General of the Israeli Foreign Ministry, who stalks off the plane cosplaying as Neo in "The Matrix," and Joel Singer (Igal Naor), legal advisor to the Israeli government. Yasser Arafat, in exile, is mentioned a lot, but never seen. Shimon Peres (Sasson Gabay), Minister of Foreign Affairs, is looped in. The talks are constantly on the verge of falling apart. Everyone agrees to leave "the Americans" in the dark.

Based on the 2017 Tony Award-winning play by J.T. Rogers (who also adapted his script) "Oslo" is directed by Bartlett Sher, who directed the play's off-Broadway and Broadway productions. This is Sher's cinematic directorial debut, although his theatrical credits are lengthy and illustrious (he won a Tony for his direction of the celebrated 2008 revival of South Pacific, and has been nominated for many things, including Oslo). There are a couple of nice visual flourishes: the repeat overhead shots of the various "delegates" standing on the tiled floor, facing off at one another, and a couple of round-the-table shots during volatile arguments. The film never shuffles off its theatrical roots, though, and there's an almost visceral feeling of how much better this probably worked onstage before a live audience. At one point an exhilarated Uri Savir forces the very confused Mona to do a tango with him, and the moment is so random it basically screams "this worked much better onstage" in bright neon.

The intermittent flashbacks to Mona's experiences in war-torn Gaza are a particular low point, both visually—everything slowed down and dreamy, with washed-out colors, signifying her trauma—and thematically. While what she saw of the "conflict" inspired her to use her power at the Ministry to get the "peace" process going, these flashbacks focus primarily on her horrified face. This centers her experience in truly unfortunate ways, as though the film wants us to invest in Mona "healing" her personal wounds through seeing "peace in the Middle East" or some such. It's a fine line, and any time the couple is the focal point the film teeters over that line.

The acting is uniformly excellent, with Salim Dau the real stand-out, and Wilbusch a close second. These are two very fine actors, playing fiery impassioned men, both articulate and exhausted by the conflict. They are worthy foes and powerfully dangerous as allies. Both actors are irresistibly watchable.

The timing of "Oslo" is less than ideal, current events being what they are. The framing, too, is blinkered and naïve. The idea is: If we can all relate to each other as people, maybe we can figure out solutions to our problems. If I learn about your childhood, I will be able to see you as human. This is well-intentioned—and to some degree, true—but only to some degree. The Oslo Peace Accords may have been historic, but they were widely despised and greeted with waves of protest on both sides: Edward Said referred to them as "an instrument of Palestinian surrender, a Palestinian Versailles" (it's not hard to understand why he felt that way, considering what was conceded), and Prime Minister Yitzhak Rabin was assassinated soon after by an Israeli extremist. And around it goes. The situation has not improved. It has deteriorated.

Available on HBO Max on May 29. 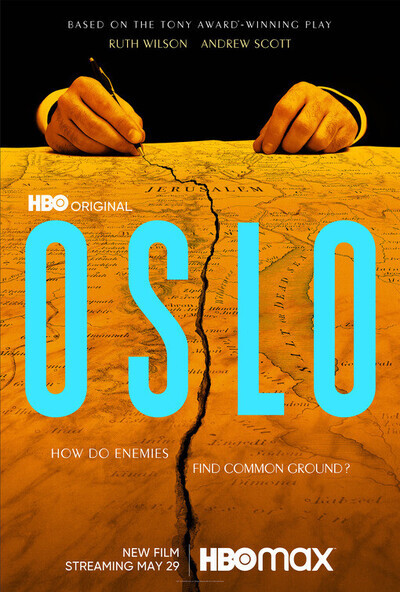