“Gaga: Five Foot Two” promises viewers a raw, warts-and-all look at the life of Lady Gaga, who first burst onto the music scene a mere nine years ago and has been a pop culture icon ever since. That puts the film squarely in the tradition of two of the greatest rock music-related documentaries ever made—Bob Dylan’s groundbreaking “Don’t Look Back” (1967) and Madonna’s “Truth or Dare” (1991). Of course, those films were made in the days before the advent of the Internet and the 24-hour news cycle. And when people went to see them, they genuinely felt as if they were getting a true behind-the-scenes look at Dylan and Madonna (even though those two, in addition to being great musical talents, were both expert manipulators of the media and of their respective images). Although prodigiously gifted both in her musical talents and her ability to present them to audiences in creative and audacious ways, the trick for Gaga here is to convey that sense of pulling back the curtain in an era when even the smallest moves and actions are broadcast to the world via tweets, Facebook posts and shaky YouTube videos. The end result is a film that may not rise to the level of “Don’t Look Back” or “Truth or Dare” but still manages to create a sense of intimacy and revelation, even as we sense that there is really no such thing as an unguarded moment for Lady Gaga.

Directed by Chris Moukarbel, who previously made the documentary “Banksy in New York,” the film follows Gaga through a few especially tumultuous and active months in 2016 that culminated with her performing before the biggest crowd of her career as the halftime entertainment at the Super Bowl last January. On the professional front, she is seen recording her highly personal album “Joanne” with producer Mark Ronson and guest vocalist Florence Welch of Florence & the Machine and planning every aspect of its release—important since her last foray into pop music, “Artpop,” was largely considered to be a dud—with the kind of precision one normally attributes to military strikes. At the same time she is doing this, she is also shooting a role for the “Roanoke” cycle of “American Horror Story” and being wooed by Bradley Cooper to star in his directorial debut, a remake of “A Star is Born.” There are special performances that she delivers at the Democratic National Convention and a birthday celebration for Tony Bennett. Finally, there is that Super Bowl performance, which she regards as a sort of summation of her career to date as well as being a chance to help bring together through music a deeply divided American population still reeling from the recent presidential election.

Though Gaga’s life would seem to be an exceptionally charmed one, there are a few dark areas to be had as well. There is the break-up with fiancee Taylor Kinney that helps to inspire some of the songs on “Joanne” but which is an emotional development she apparently has not quite yet gotten over. More significantly, there is the chronic pain that she has developed since suffering a (misdiagnosed at first) broken hip on her “Born This Way” tour three years earlier. Although she is often able to work through the pain with her indefatigable energy, there are moments when we see her barely able to move as a result of what she describes as a “rope of agony” extending throughout her body. That said, this does lead to one of the most bizarrely amusing moments in the film when Gaga goes in for a medical examination and has a procedure done while her makeup people are doing their thing to prepare her for her next appointment.

Of course, Gaga could have either shut off the cameras (she was one of the producers and presumably had a little pull in that department) or waited until afterwards for the makeup application but that would not have had nearly the same effect. Throughout the film, there are a number of similar instances where you get the sense that even the most trivial moments are being micromanaged for maximum effect. At one point, we see her having a poolside meeting with her fashion consultants over her plans for a stripped-down look to accompany the publicity push for “Joanne”—a moment that might not have received any notice or even made the final cut except for the fact that she has chosen to appear topless during the entire sequence. That said, there are a couple of moments that are interesting primarily because they don’t quite go the way she presumably expected. In one, she plays the title track of her album, a tribute to the late aunt that it was named after, for her grandmother. But what is clearly set up to be an extraordinarily cathartic moment instead moves into something more quiet, practical and touching in its own surprising way. In another sequence, she goes into a Wal-Mart, camera crew in tow, to check the placement of her album—when she cannot find it, she starts asking around but neither the clerk nor a security guard recognize her at first.

If “Gaga: Five Foot Two” had been about practically anyone else in the current pop star firmament, it might have come across as 100-odd minutes of overt navel-gazing of no use to anyone who is not already a lifelong fan club member. However, what makes this documentary work is the inspiring and engaging presence of Gaga herself. Yes, there is never a moment when she is not acutely aware that she is on camera but at the same time, she still manages to radiate a simple and genuine sense of decency and humanity that makes her eminently relatable. When she interacts with members of her devoted fan base, there is a deep connection between them that cannot be denied nor faked. When she talks about her hopes of bringing people together via her Super Bowl performance, you get the sense that she really means it and is not just spouting PR pablum. When she is recounting the miseries of the pain she has been suffering over the years, you genuinely feel for her and want to somehow bring her the kind of comfort that her music has brought to so many people over the past few years. And when she levels a couple of zingers at Madonna in response to critiques she has leveled about her in the press … well, let’s just say that Hell hath no fury like a pop diva scorned. 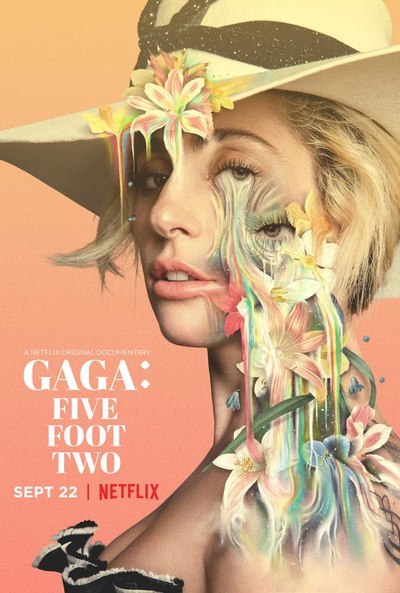 Lady Gaga as Herself