Back in the day when socially-conscious cinema also had a shot at finding a mainstream audience, some films in that category used the phrase “torn from today’s headlines” to add a little marketing sizzle. “From Nowhere,” which is about three teenage high-schoolers in the Bronx facing deportation because of their undocumented status, is clearly a movie of that ilk, although given the contemporary mode of socially conscious movies, to advertise itself as such would be unforgivably crass. Like most such pictures made in the U.S. today, this is an indie that keeps its indignation under tight wraps, a message picture that tries to convert the nonbelievers in the audience by presenting its message in the most polite way possible. Of course, the people who would most benefit from exposure to the message—that undocumented aliens in the United States are, for the most part, people like you and me, as opposed to inhuman ISIS sleeper agents—are not the kind of people who’d go to an indie message movie.

To tell you the truth, I’m not someone who’d go see an indie message movie myself, not anymore. I’ve seen too many of them and I didn’t get into movies for the social consciousness in the first place. That said, “From Nowhere,” directed by Matthew Newton from a screenplay by Newton and Kate Ballen, is an entirely watchable and sometimes engaging effort that serves as a great showcase for both the new and more seasoned members of its cast. The picture opens with Julianne Nicholson, as a high school teacher named Jackie, trying to get Shakespeare across to her students. They are typically uninterested, except for Moussa (J. Mallory McCree), who hits her with some on-target observations on King Lear. Moussa is one of three students to whom Jackie, working slightly under the radar of her school superiors, has recommended to an immigration lawyer played by Denis O’Hare. The others are Raquel Castro’s Alyssa, the school’s valedictorian, from Peru, and Octavia Chavez-Richmond’s Sophie, a Dominican girl. Moussa’s family is from Guinea, and seems to have the most traumatic past. Which is a good thing, according to O’Hare’s lawyer. “Genocide, genital mutilation, and dictators” are three things immigration judges love to hear about, he advises them brusquely in an early scene. Once he discharges them back into the world, the trio has trouble enough navigating the narratives of their own chaotic lives, let alone constructing a credible narrative to bring before a court.

Moussa’s conflicts with his mother result in a stand-off neither wants. His problems with his girlfriend are exacerbated by his concern for Sophie. Sophie is hiding, from everyone, a home life that included blatant sexual harassment if not outright abuse. The tension spills out into everyone’s social lives, leading to one intense confrontation with beat cops over nothing. But nothing could become everything if even one of these kids is hauled off to a precinct house, and the film is at its most effective when it’s conveying the quiet terror of such scenarios.

Like so many socially-conscious movies, this one’s schematic nature, the better with which to make its points, shows its hand a little too blatantly at times. While Moussa and Sophie’s stories are well-fleshed-out, Alyssa’s is neglected for the most part, until the very end, at which point it’s used to play a “what incredible and sad irony” card. O’Hare’s lawyer, initially a bit of a cartoon, grows in both written dimensionality and portrayal, and the one-on-one scene between him and Chavez-Richmond is an undeniable highlight. “From Nowhere” is not a visionary work, and I don’t think it aims to be; but it sets a coherent agenda from the get-go and manages to make a credible and disquieting narrative out of that. 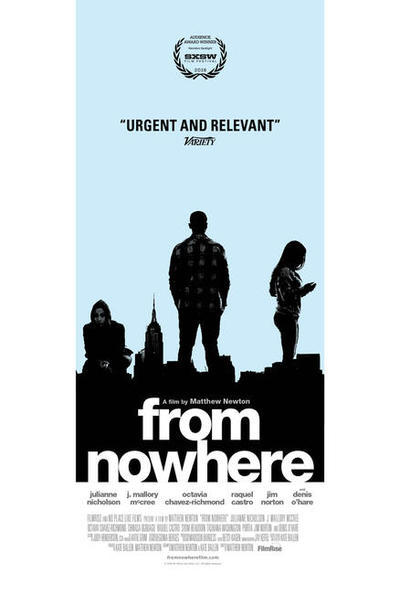