A shrewd, unhurried portrait of family and friendship, Ira Sachs’ “Frankie” might at first seem like a departure for the filmmaker. After all, Sachs is mostly known for his signature New York-based films that feel their way through the lives of urban dwellers with a rare measure of authenticity. In that sense, he and his trusted co-writer Mauricio Zacharias have indeed departed elsewhere. To Sintra, to be exact—Portugal’s picturesque, mountainous resort town that looks to be as relaxed, warm and gently breezy as an Ira Sachs film. Though in a deeper sense, “Frankie” is not really a diversion for Sachs, one of our most wisely empathetic contemporary storytellers. The family members (and their friends who clearly have earned their badge of feeling like family) we follow here are developed just as carefully and with as much attention to detail as in his past work. This is perhaps not the finest of his films—it’s a calculated canvas of players by design, and Sachs feels ever so slightly out of his comfort zone. Still, what a thorough pleasure to be in the company of “Frankie,” a film that feels like a sumptuous beach read on a lazy sunny afternoon.

The family members in question are all in this idyllic locale (which you will probably add to your bucket list for ‘places to visit before you die’) as a gesture to their matriarch Françoise Crémont/Frankie (Isabelle Huppert, deceptively nonchalant), who has summoned the nearest and dearest of her clan for a vacation retreat. “It’s alright. I am very photogenic,” is the first thing we hear her say, when her teenage granddaughter Maya (Sennia Nanua) warns the topless Frankie about the possible presence of onlookers while she does her swimming pool laps completely carefree. Well, she indeed is very photogenic, and the world in which the famous French actress Frankie lives (not that distant a world from Huppert’s in real life, one shall imagine) seems to agree.

This terrific intro to Frankie’s wit is followed by various members of the clan walking, talking, reminiscing and reflecting on life with their relatives and significant others in parks and cobblestone streets—it all unfolds in a single day with the casualness you’d expect from a summery Rohmer film or Richard Linklater’s “Before” Trilogy. Except, there is unspoken grief that casts a shadow over the whole affair. We learn, with hints that leak out of conversations in small doses, that Frankie’s cancer had come back and she might not age another year. This trip is, in more ways than one, her attempt to say goodbye to her loved ones, and to help everyone tie some loose ends in their respective relationships.

Among Frankie’s tribe are her husband Jimmy (Gleeson, as soulful as ever), whom Frankie shares an exquisitely written, private scene of confession and confrontation with later in the film. There is also Sylvia (Vinette Robinson, quietly powerful), Frankie’s daughter from her previous marriage, and her husband Ian (Ariyon Bakare), a couple in a seemingly tremulous marriage that matures in their (and our) eyes at the end of the day. Then we have the emotionally and financially troubled son Paul (Jérémie Renier, delivering the film’s showiest and most memorable performance), whose refusal to accept a valuable bracelet from his mom generates a rewarding scene in the second act. And then there is the Hair & Make-Up artist Ilene (Marisa Tomei, typically playful), a New York-based freelancer who had become close friends with Frankie on a film set. To the matchmaker Frankie’s surprise—she has plans to set Ilene up with Paul—Ilene shows up with her cinematographer boyfriend Gary (Greg Kinnear), who is vocal about his ambition to direct his own film one day, instead of working as part of the second unit crew of the latest “Star Wars” film.

It sounds like the union of these characters would create a perfect storm. But instead, co-writers Sachs and Zacharias allow them to ease into their individual scenes; each feeling like a low-key aria within something loosely operatic, be it Maya’s trolley ride and beach trip with a local fling or an old local fan’s birthday party Frankie hesitantly agrees to join as a surprise. If “Frankie” feels somewhat stiff in parts, that’s mostly due to some awkward, stagey delivery of lines in English when it’s not the performer’s native tongue. Lifted up with familial insight at every turn and an unforgettable birds-eye, magic-hour shot in the end, “Frankie” generously eulogizes an undaunted woman living the conclusive chapter of her life in a changing world, ready for her final close-up.

This review was filed from the Toronto International Film Festival on September 9th. 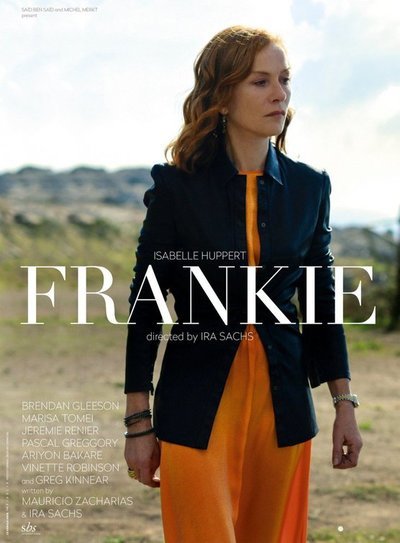