Brad Anderson has made a career out of being as reliable as they come as a film and TV director, able to switch genres easily. The workmanlike career has led to several stand-outs, including “Session 9,” “The Machinist,” and “Transsiberian.” So I was excited at the prospect of a filmmaker I admire playing with a classic mystery/thriller structure in the Netflix Original “Fractured,” released today. That excitement quickly turned to boredom and then outright anger at a twist that really thinks you’re an idiot. This atrocious movie never makes a lick of sense, wearing its “message” on its sleeve like a bad term paper, and then ending in a way that should make you angry more than eager to see if it makes any sense.

Ray Monroe (Sam Worthington) is traveling with his wife Joanne (Lily Rabe) and daughter Peri (Lucy Capri) when tragedy strikes. They stop off at a gas station and Peri wanders away to look at a part of the site that’s under construction. She’s startled by a stray dog, who moves toward her as Peri backs up to the edge of the construction site. Ray turns around to see her, throwing a rock at the dog as Peri falls backward, landing on the concrete below. As Ray jumps to save her, he also falls. He wakes up in a daze with Joanne yelling at him, and the trio quickly speeds off to a nearby hospital.

From the minute they arrive, “Fractured” turns into a leaden commentary on our broken health care system. Despite Peri likely having at least a broken bone and possibly much worse with internal bleeding, the hospital workers are cold and downright cruel. After a long wait, some workers finally agree to see Peri, and a kind doctor (Stephen Tobolowsky) appears to change their fate. Peri and Joanne are taken to the basement for imaging, and Ray waits ... and waits ... and waits.

And then “Fractured” becomes a riff on “The Lady Vanishes” (or “Flightplan” for modern audiences), in which we have to decide if Ray is crazy or if everyone at the hospital is conspiring to make him so. The receptionist and doctors claim that Ray came in alone with his own head injury, which was then treated. There was no Peri. There was no Joanne. Most of “Fractured” consists of Ray trying to convince authorities that his wife and daughter are being held captive somewhere in the hospital, possibly even being used for an illegal organ donor operation.

It becomes numbingly repetitive. What’s most startling is how little energy Anderson and company bring to it visually. For “Fractured” to work, it needs to feel like a waking nightmare. Anyone who has been in a big hospital knows there’s something inherently creepy about those long hallways down which it’s easy to believe loved ones could literally disappear. But there’s so little visual personality in “Fractured” that it’s startling. No sense of dread or atmosphere. It’s almost a single-setting piece, and that setting is flat and dull. Start to consider what someone like John Carpenter or David Cronenberg would have done with this space and concept and you’ll realize how much is missing here. The script by Alan McElroy, the man behind the “Wrong Turn” series, isn’t exactly blazing with sharp dialogue, and so without any interesting production design elements and forgettable, flat characters, we’re left with nothing to hold onto except the inevitable twist.

And then that twist comes like a clanging bell, and all the stuff that didn’t make sense before makes even less sense now, and you realize this whole movie has been a cheat. Roger Ebert notoriously panned “The Usual Suspects” because he felt manipulated by it. I don’t necessarily agree with him there, but I can relate more after watching “Fractured.” 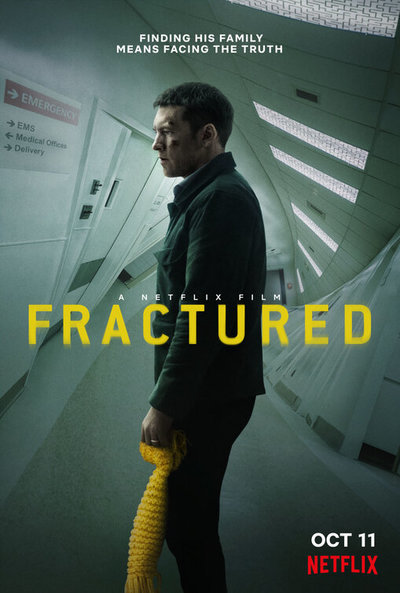