Somewhere in the middle of “My Dinner With Andre,” Andre Gregory wonders aloud if it's not possible that the 1960s were the last decade when we were all truly alive, that since then we've sunk into a bemused state of self-hypnosis, placated by consumer goods and given the illusion of excitement by television. Walking out of “Four Friends,” I had some of the same thoughts. This movie brings the almost unbelievable contradictions of that decade into sharp relief, not as nostalgia or as a re-creation of times past, but as a reliving of all of the agony and freedom of the weirdest ten years any of us is likely to witness.

The movie is told in the form of a looseknit autobiography, somewhat inspired by the experiences of Steve Tesich, the son of Yugoslavian parents who moved to this country as a boy and lived in the neighborhoods of East Chicago, Indiana, that provide the film's locations. If the film is his emotional autobiography, it is also perhaps the intellectual autobiography of Arthur Penn, the film's director, whose “Bonnie and Clyde” was the best American film of the 1960s and whose “Alice’s Restaurant” (1969) was an earlier examination of that wonderful and haunted time.

Their movie tells the stories of four friends. When we meet them, they're entering their senior year of high school. It is 1961. That is so long ago that nobody has yet heard of The Beatles. One of the friends is a young woman (Jodi Thelen), who imagines she is the reincarnation of Isadora Duncan, and who strikes attitudes and poses in an attempt to appear altogether too much of an artistic genius for East Chicago to contain. The other three friends are male classmates. They all love the girl in one way or another, or perhaps it's just that they've never seen anyone like her before. In the ten years to follow, these four people will have lives that were not imaginable in 1961. They will have the opportunity to break out of the sedate conservatism of the Eisenhower era and into the decade of "alternative life-styles." The movie is ambitious. It wants to take us on a tour of some of the things that happened in the 1960s, and some of the ways four midwestern kids might have responded to them. It also wants to be a meditation on love, and on how love changes during the course of a decade. When Thelen turns up at the bedroom window of her "real" true love (Craig Wasson) early in the movie and cheerfully offers to sleep with him, Wasson refuses, not only because he's a high school kid who's a little afraid of her, but also because he's too much in love with his idea of her to want to make it real. By the time they finally do come back together, years later, they've both been through bad scenes, through madness, drug abuse, and the trauma of the war in Vietnam. They have also grown up, some. The wonder is not that “Four Friends” covers so much ground, but that it makes many of its scenes so memorable that we learn more even about the supporting characters than we expect to.

There are individual scenes in this movie that are just right. One of them involves a crowd of kids walking home in the dusk after school. Another happens between Wasson and Miklos Simon, who plays his gruff, defensive Yugoslavian father, and who finally, painfully, breaks down and smiles after a poker-faced lifetime. A relationship between Wasson and a dying college classmate (Reed Birney) is well drawn, to remind us of undergraduate friendships based on idealism and mutual discovery. And the scene where Wasson and Thelen see each other after many years is handled tenderly and with just the right notes of irony.

“Four Friends” is a very good movie. Like “Breaking Away,” the story of growing up in Bloomington, Indiana (for which Tesich also wrote the original screenplay), this is a movie that remembers times past with such clarity that there are times it seems to be making it all up. Did we really say those things? Make those assumptions? Live on the edge of what seemed to be a society gone both free and mad at once? Some critics have said the people and events in this movie are not plausible. I don't know if they're denying the movie's truth, or arguing that from a 1980s point of view the '60s were just a bad dream. Or a good one. 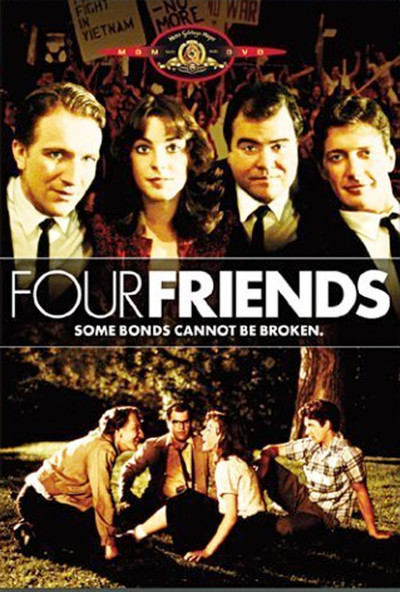