Billy Crystal's "Forget Paris" is a more or less deliberate attempt to repeat the success of "When Harry Met Sally . . .," his 1989 romantic comedy. Its ingredients look as if they were devised to appeal to all audiences: This is the first film to find a way to combine professional basketball with April in Paris. By all rights, the movie should be a pale imitation of its betters, but sometimes lightning does strike twice, and this is a wonderful film, filled with romantic moments that ring true, and with great big laughs.

The movie stars Crystal as Mickey, a popular NBA referee who is known as skilled and fearless (in an opening sequence, he nullifies a sensational game-winning last-second shot by Charles Barkley). When his father dies, Mickey accompanies the body to France, because the old man, who made few friends after the Second World War was over, wanted to be buried with the dead of his Army company. At the Paris airport, the body is lost, causing Mickey to scream: "What do you mean, what did it look like? My coffin was the one with the red yarn on the handle!" He is screaming at Ellen (Debra Winger), an American in Paris, who works for the airline. She likes his sense of humor. (When Customs later quarantines the body for health reasons, he screams, "He's dead! He has no health!") They meet again at the cemetery, one thing leads to another, he stays in Paris an extra day, and she takes him sightseeing. (Looking at Rodin's "The Thinker," Mickey muses, " `The Thinker' is thinking, `goddamn that Rodin! Three drinks, and I'm nude.' ") This whole story of their first meeting and gradual courtship is told as a series of flashbacks, in a conversation between an old friend of Harry's (Joe Mantegna) and his fiancée (Cynthia Stevenson).

They're in a restaurant, waiting for others to arrive, and as each new couple joins the table, it adds details to the saga of Mickey and Ellen. (No prizes for guessing which couple arrives last.) Mickey and Ellen were made in heaven for each other.

Unfortunately, their lifestyles were made in hell, and although falling in love is easy for them (despite various obligatory difficulties), living together is not. Ellen is not thrilled by her first glimpse of Mickey's bachelor pad, which is "kind of a shrine for watching ESPN." Nor does she much like sitting around at homewhile Mickey commutes within the far-flung empire of the NBA. The pattern of the movie consists of fights and separations, followed by reunions and reconciliations, all recounted by the pals around the restaurant table.

It all works. Even the seemingly artificial device of having the friends tell the story works, especially since Mantegna is a sports writer and his story about Mickey could be a warning to Stevenson that life with him could also be difficult. What works especially well is the prickly relationship between Mickey and Ellen, who are both bright and quirky, and so have interesting fights.

What everyone remembers about "When Harry Met Sally...," of course, is Meg Ryan's virtuoso scene in a restaurant, where she fakes an orgasm, and the woman at the next table tells the waiter, "I'll have whatever she's having." "Forget Paris" wisely doesn't attempt to duplicate that scene, but comes up with a classic of its own, involving Winger and a pigeon, that builds into one of the great slapstick moments.

And then of course there is Paris. No other city has so many associations with movie romance, and when Mickey realizes he is looking at the Pont Neuf, which figured in "An American in Paris," of course we hear Gene Kelly singing "Our Love Is Here to Stay" on the soundtrack.

What's weird is to see scenes of Paris' romance intercut with Mickey's daytime job. The movie convincingly places Crystal in the middle of NBA action, using cameos by a lot of stars; there is a great moment when Kareem Abdul-Jabbar gets ejected from his own farewell game by the lovelorn Mickey.

Crystal has made a career out of being smart, quick and glib. It takes a smart actress, like Winger, to match with him, and here, as in the otherwise completely different "Shadowlands," she is the right woman for a man so wrapped up in his work that he has no life. Of course, their relationship isn't simple; as Mickey observes, "Marriages don't work when one partner is happy and the other is miserable. They only work when both are miserable." 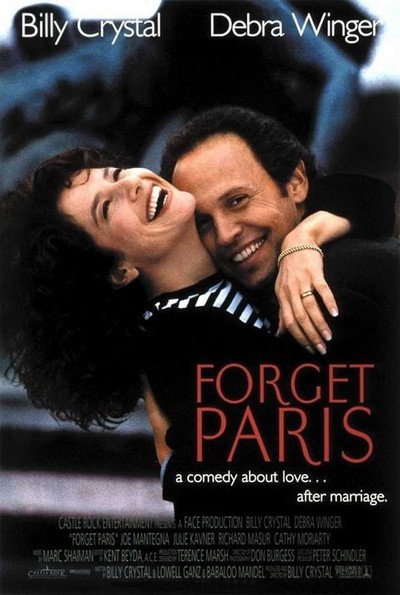 Rated PG-13 For Language, Including Some Sex-Related Dialogue