Even a script written by algorithm would make more sense than "Force of Nature," a dumb dud of a movie that relies on the most preposterous of coincidences and the most exhausted of premises (in both senses of the word).

In fact, the premise is the premises. The Category 5 storm is just a convenience to both keep everyone in an apartment building that two cops are trying to evacuate, and to cut off their communications. The group stuck inside includes: an old guy with a secret who won't leave, another old guy named Ray (Mel Gibson) who is an ailing retired cop (but completely up on all the latest cop gossip and cases). He also refuses to leave. Then there's his beautiful but worried doctor daughter (Kate Bosworth), a survivalist with an arsenal stockpile, and a guy who got in trouble at the grocery store for trying to buy a hundred pounds of meat (William Catlett), whose only explanation is that he has to feed his pet, Janet.

Also in the building: a bunch of ruthless crooks who are looking for ... something we won't know until later. But we know right away that they are ruthless because the trigger-happy top guy, known as John the Baptist (David Zayas), shoots a nice old lady and one of his own people just because he gets annoyed with them.

Trying to stay on top of all of this is cop number one, Cardillo (Emile Hirsch), a cynical (say it with me) burned-out loner with a tragic past who cannot be bothered to do his job, much less learn Spanish. He's got that whole "I'm too old for this"/"I wasn't even supposed to be here" vibe. He's just running out the clock on his retirement. His new partner exists just to provide contrast. Cardillo has turned off his feelings but warmhearted Jess (Stephanie Cayo) is a native Puerto Rican who is dedicated to the job.

Director Michael Polish moves the characters around the building like chess pieces. Over here, one group is dealing with a life-threatening injury. Over there, another group is hiding out from John's indistinguishable assault-weapon-wielding goons, who want the treasure but do not know exactly where it is. The shoot-outs and hide-outs and other action scenes are staged adequately, but the characters are so generic, with every element so obviously designed solely to set up some unsurprising revelation, that any tension dissipates. So do the pauses for characters to bind their wounds while sharing synthetic backstories.

Given the devastating impact of the actual Category 5 Hurricane Maria in 2017, using a storm like that as a peg for a heist movie is in questionable taste. But it doesn't stop there. The plot-by-bullet-point adds not only the personal redemption and realizations of various characters but also piles on racial profiling and the Holocaust, tossed in to add unearned heft to the confrontations and lessons learned.

The final scene is almost a cynical parody of action movie endings, with an implausible romantic connection and a downright ridiculous disposition of some of the treasure. Chekhov famously said, "One must never place a loaded rifle on the stage if it isn't going to go off." A lot of loaded guns, plus Janet the pet, inflict damage before the end of "Force of Nature." I'm pretty sure Chekhov also knew there has to be more than that. 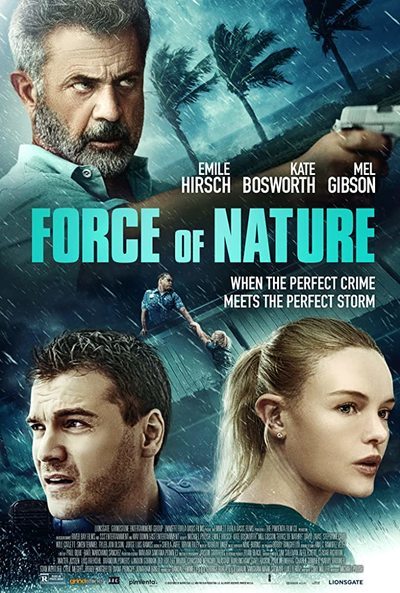 David Zayas as John the Baptist