Taffy Brodesser-Akner's "Fleishman is in Trouble" is a potent collection of crises, a mini-epic about being in one's forties and not having everything figured out, as one might believe it all should be. That realization scares them. It makes them angry; it makes them run away. One's marital status (happily together or blissfully apart) and having children doesn't bind characters like Toby, Rachel, and Libby to a greater sense of certainty of themselves, which they only have a lens-flare-heavy sense of the past of which to fact-check. "Fleishman is in Trouble" is a saga across time, relationships, and even bounds of empathy that offers the best kind of whiplash. When this FX adaptation's excellent cast and storytelling are truly in sync, its wisdom can be inescapable.

The series starts with the character that Brodesser-Akner's arguably biggest influence, Philip Roth, would relate to most. Eisenberg's Toby, a liver specialist in New York City, has just hit a strange point: he's divorced from his wife of 15 years, Rachel (Claire Danes), and finally sees himself as a hot commodity thanks to dating apps. He's having a lot of sex. A whole world of opportunity has been opened for him, or so it seems, as he chases the rush of getting a hot stranger from your phone to want you. That high only lasts so long when he is stuck taking care of his two young kids, Solly and Hannah, after theater agent and hard-working ex-wife Rachel suddenly drops the kids off in his apartment early one morning and ghosts everyone. She seemingly drops off the face of the earth, no calls to her assistant answered.

There is a lot of initial angst in this story toward Rachel, especially as Toby looks back on a relationship that began with love and was corroded with passive-aggressive disagreements about practically everything. Rachel is missing, but she haunts this story, making its reflections on their clashes about money, status, and his considerably more attentive parenting all the more gutting. In a Roth narrative, this might all play out differently, or its anger toward women might feel a certain kind of way. But part of the power of "Fleishman is in Trouble," as a series but also a true page-turner, is how this is a Trojan horse to a greater understanding about the women in Toby's life.

We learn about Toby's life initially from the off-screen presence of Libby (Lizzy Caplan), whose voice hits us from the beginning. Libby has known Toby since a trip abroad in college (along with the suave and directionless Seth [Adam Brody]), but they have been out of touch for years until Toby reaches out. She's also faced her big changes in life, having moved to the New Jersey suburbs and become a stay-at-home mom, leaving behind a previous version of herself that worked for a magazine, prowled New York City art house movie theaters, and had more independence. Like Rachel, Libby orbits around other moms whose lives seem to revolve around their status and offspring. And like Rachel, Libby does not have a #MomSoHard preciousness for this life role. (Libby's awesome vintage t-shirt collection is its own rebellion against the catchphrase shirts about brunch, wine, etc., that populate this series' costuming for modern motherhood.)

In creating this world through her observations about Toby—she becomes the voice of his conscience, and in turn, his ideas get in her head—Caplan does an incredible, distinct job as a narrator. Her voice is sometimes rich with excitement, sometimes grief, but always attention-grabbing. Caplan's work highlights how "Fleishman is in Trouble" fills out with a different perspective than we usually get on a guy like Toby and its overall sharp writing. (The book is the kind you want to read with a highlighter, and the series carries on much of its prose.) For a story about characters going in circles with their thoughts, hardly grabbing any concrete answers on each go around, Libby's narration sticks with you. It gets in your head, too.

Spreading its best material comfortably across eight episodes, this version highlights how much its pacing feeds off of going from one character to the next, especially for a story that initially has a missing person and then intentionally forgets about her to study other people. It's funny, then, how the book is more expansive but seems to flag less than the series does, maybe because certain parts of the series are more draining when it's multiple hours of a flattened version of Toby. He is the least compelling of the main characters, and in a difference worth calling out, is just not as funny when played by Eisenberg. The kind of satire that comes from the character seemingly on a tear away from past frustrations is played too straight here; instead of his performance gaining some dimension, it's more reliant on Eisenberg's fast-speaking anger or the silent, cold glare he can send like a hurt boy waiting to hurt back.

But the expansiveness of the series also provides us later great episodes about "Me-Time" for Rachel and Libby; Danes and Caplan give excellent performances that show how there are no clear villains in these intricate crises and conjure a walloping sense of empathy for women who have swallowed an immense sadness, anger, and uncertainty. Brodesser-Akner confidently walks a fine line in how to present these pained women so that we understand more about why they have done what they have. Like how Rachel is, through Toby's eyes, presented as negligent, constantly nagging, and never making him feel like enough; her true backstory, her life experiences muted by their lack of visibility to Toby and others, is staggering and moving. In getting to know these women through these vivid performances and impactful standalone episodes, "Fleishman is in Trouble" helps us see its entire world with more warmth.

"Fleishman is in Trouble" boasts the rare series adaptation credit in that Brodesser-Akner created the series and wrote many of the episodes (Michael Goldbach adapted an episode also). As such, it's incredibly faithful, along with its careful treatment by notable visual storytellers who have grappled with battles of the sexes (Jonathan Dayton & Valerie Faris), New York stories and polarizing people (Shari Springer Berman & Robert Pulcini), or complicated feelings of muted urges (Alice Wu). They help make the story like an eight-hour modern indie epic, with quirky, spiraling camera movements for Toby's bouts in bed, ugly marriage-destroying fights caught in handheld, and numerous shots of New York City upside down to match the book's cover and its characters' general state of mind. It's a show clearly made with great care for the story and the internal turmoil of everyone involved. One can tell that many people involved in this production knew they had something special in their hands—not just a great book to work from, but a storytelling structure that can uniquely surprise and move the Tobys, Rachels, and Libbys out there.

Entire series screened for review. "Fleishman is in Trouble" is now streaming on FX on Hulu. 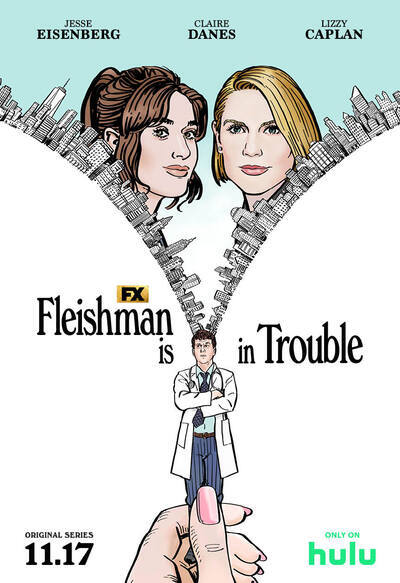