This is a movie with a lot on its mind. The nature of time, the nature of fate, the nature of existence itself. Written and directed by Christopher MacBride, “Flashback” has a narrative that posits that “what might have been” actually is, or maybe was, in an alternate timeline, and that how we understand time can throw us into catastrophe.

The movie begins in the glum here and now of Fred Fitzell (Dylan O'Brien). He has a dying mother who’s got days to live, and not well—her mind is going as well as his spirit. He’s married, has a new apartment, a new job, but his existence is suffused with glumness. In a brief blackout state, in which some brutal gothed out reprobates appear to be assaulting him, we see that things could be worse. And they get worse, and worse than that.

Fred still lives in his home town, and starts seeking out old high school classmates when he gets curious about the fate of a girl named Cindy Williams (not the “Laverne and Shirley” costar, mind you). His high school misadventures involved the abuse of a street drug called “Mercury,” which His Fellow Kids nickname “Merc.” One night in the past a Merc session morning-after found Cindy disappeared.

Soon the current timeline—in which Fred goofs off at work, sketching his boss as she yammers on about granular metrics in spite of the fact that he’s got a major presentation coming up soon—alternates with Fred’s high-school timeline, in which he’s likely to screwup a major final administered by an impossibly pompous teacher. The scary people show up, too, as does a scary screeching head, or something, in one of several Lynchian-aspirant bits. There’s also a spooky kid in a hoodie. It’s a lot.

And it mostly doesn’t quite work, because Fred, as written by MacBride and played by Dylan O’Brien, just isn’t a compelling character. He’s mopey and uninteresting from frame one, his high school hairstyle wig is almost abominable, and his surroundings mistake “dreary” for “raw.” The movie’s roots are in a lot of interesting stuff, from “Blue Sunshine” to “Donnie Darko,” and more recent movies like “Synchronic,” “I’m Thinking of Ending Things” and “The Roads Not Taken.” But MacBride strains for effect too often to pull you in—at one point, for instance, I almost said to the screen “Stop trying to make ‘Merc’ happen.”

And compounding these shortcomings is that, after asking a good many provocative questions, “Flashback” lands on the most banal of conclusions. One still wants to give the movie credit for its ambition. 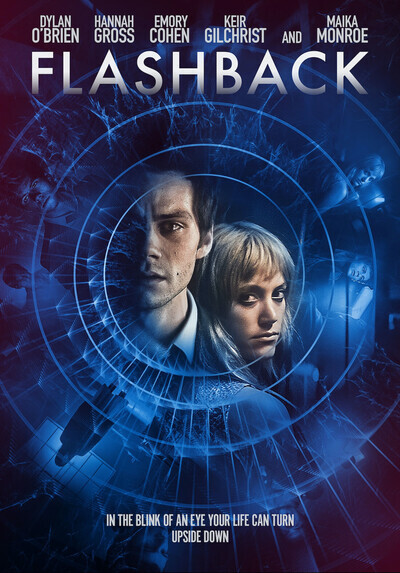