The Roads Not Taken

Elle Fanning exudes resolve and sincerity as she charitably moves through Sally Potter’s “Roads Not Taken,” a scattershot ‘what if?’ story centered on a writer with early onset dementia. The unswerving Fanning plays the writer’s caring daughter Molly, fretting over her dad, Leo (Javier Bardem), over a day in New York, refusing to surrender to the fact that the Leo she once used to know is drifting away. Reuniting with the director of the poetic “Ginger and Rosa” in which she also starred, Fanning delivers a performance of such astonishing depth and emotional range that her presence here is both a relief and strangely frustrating, since the film that surrounds the young actor is sadly no match for the qualities she brings to Potter’s profoundly personal narrative.

A conduit of sorts for Potter, who apparently cared for her own brother with early onset dementia, Fanning’s Molly angelically helps Leo with his errands after she picks him up from his unkempt Brooklyn apartment, a grubby space rattled by the nearby subway tracks with every passing train. The duo’s chores involve visiting a dentist, taking a cab and hitting various routine roadblocks along the way, instances that chip away at Molly’s emotional sturdiness and patience with unsympathetic people. She doesn’t understand why they can’t be a little more accommodating of her father’s delicate situation. And because she desperately wants to believe Leo is still all there, she snaps every time anyone talks about her father in third person, as if he is not in the room. But “is he really there,” someone finally and inevitably asks her.

A tentative no is written all over Molly’s face, even if she doesn’t necessarily admit it. But the answer, at least in Potter’s mind, seems to be a resounding partly. So the filmmaker sets out to explore the other part we wouldn’t get to see in real life, perhaps attempting something therapeutic not only for herself but also for anyone who cared for a loved one with deteriorating memory. As part of her noble endeavor, the writer-director envisions two alternate visceral realities for Leo; scenarios in which he ventures off to other lands (e.g. roads not taken) in his mind, to fantasy lives he might have lived but didn’t, after he left Mexico for the US at a young age. Meanwhile, his human shell remains beside a struggling Molly, who desperately tries to break into those imagined worlds that unfold in her father’s mind and soul, clued in with nothing but indistinguishable gibberish words.

At least one of those clues proves to be an intelligible one: “Dolores,” Leo mutters. We soon learn (from Molly’s mom Rita, played by Laura Linney in a brief part) that Dolores (Salma Hayek) was his first love, proceeding to witness a marriage that never was between the fiery duo in rural Mexico. The second reality emerges out of nowhere. Leo is by tranquil turquoise waters somewhere in Greece, talking to a young, beautiful tourist about his long-estranged life and distance from his daughter he hasn’t seen in a while. This is the scenario, we slowly grasp, that could have happened had the writer fallen prey to his thirst for freedom after having Molly and set out to a selfish journey of mid-life crisis or self-rediscovery.

Throughout these meaty and competing narratives, Bardem believably slips in and out of his three characters with nuance. Yet somehow, Potter can’t seem to connect the dots between these evocative yet clumsily edited viewpoints. Always touched by a sense of mist and nostalgia as evidenced in “Orlando” and “The Tango Lesson,” Potter attempts to form a feeling of wistfulness through the cracks of Leo’s mind. But because we don’t actually get to see or hear the real Leo Molly grew up with, we get shortchanged on the paths to forge a profound connection with him. Fanning heroically strives to be that link for us, as she learns to prematurely grieve for a parent who happens to be far from deceased. If only her palpable love for her father could have also given us enough reasons to care as much as she does. Thanks for Fanning’s characteristically expressive performance, we at least don’t leave this hesitant journey entirely empty-handed. 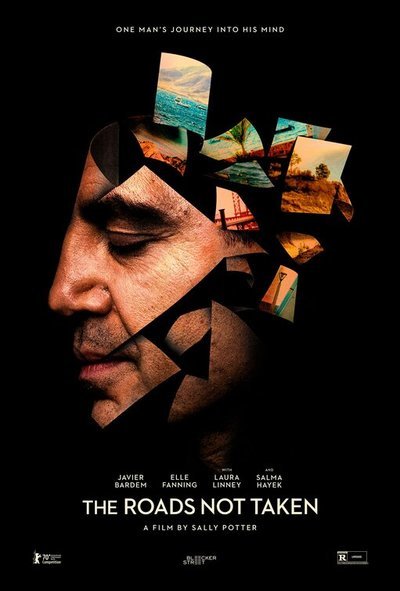