There was a period in which the prodigiously talented actor Sean Penn’s personal demeanor and behavior was his own worst enemy. And he knew this. I’ve cited before the words from his acceptance speech when he won the Best Actor Oscar for his work in “Milk”: “I know how hard I make it to appreciate me.” And while he seems to have a more settled and in certain respects productive life than he did in his Hollywood hellion days, a self-defeating tendency has crept into his artistic life.

With “The Indian Runner,” “The Crossing Guard,” and “The Pledge,” he proved a passionate and increasingly capable director. “Into the Wild,” a bravura effort, was eye-opening and virtuosic in several respects but valorized its self-destroying lead character in ways some might call philosophically untenable. 2017’s “The Last Face” stepped further into realms of bathos and directorial self-aggrandizement. In his new film, “Flag Day,” he acts, for the first time, in a movie he’s directing. As do two of his children, Dylan Penn and Hopper Jack Penn.

The family endeavor aspect of the picture is not really a problem. Both Dylan, who in appearance favors her mother, Robin Wright, and Hopper Jack, who here rather resembles Spike Jonze after being stretched out on a medieval rack for a couple of days, are better than capable performers. What trips this movie up is the source material, a memoir by journalist Jennifer Vogel about her career criminal dad, counterfeiter and con man John Vogel. Both the story as a whole and the character of John, who Penn plays here, inspire Penn to stage, better-than-reasonably, some distinctive dysfunctional family dynamics, and they also inspire him to romanticizations and acting-outs of a truly jaw-dropping variety.

The movie opens in 1992, with Jennifer, played by Dylan, learning just how good a counterfeiter her dad had been, intercut with some “Sugarland Express” style footage of a fleet of cop cars pursuing a lone vehicle that can’t get away. We flashback to the 1970s; a car radio plays America’s “Sister Golden Hair” (contrary to what contemporary motion pictures would have you believe, this was NOT the only pop song of 1975), and Penn, made up to look younger and sporting some real slick-reprobate facial hair, smokes a cigarette and lays out some coolest-guy-in-the-universe schtick on little-girl Jen (Addison Tymec). John’s “roguish” “charm” is a little shopworn, both conceptually and in Penn’s performance; he’s far, far better in the movie the closer he gets to his own age, and the more he has to play an increasingly broken and largely pathetic failure.

John is the errant father the kids (Hopper Jack is Jen’s younger brother Nick) love; Katheryn Winnick’s Patty is the drunkard mom who eventually straightens out and becomes a different kind of drag, an AA devotee who also turns a blind eye to her new husband’s attempts to molest Jennifer. I can’t say how many liberties Penn, working from a script by Jez Butterworth and his own brother John-Henry Butterworth, took with their source material, but the way much of it plays out here feels movie-familiar rather than real-life familiar. “Flag Day” manages to somehow underplay John Vogel’s deviousness and the way Jennifer Vogel was able to transcend a most unhelpful upbringing. For long stretches in its first half, it presents sequences in which the actors emote with complete abandon while a hand-held camera tries to keep up. It’s all rather undifferentiated and scattershot. Every now and then a flashback will try to pull the viewer back to a particular mood or theme and most of the time the device seems like a reach—which makes it all the more confounding when late in the movie Penn hooks on to a flashback that actually signifies the way he wants it too.

Once Jen is inhabited full-time time by Dylan and moves in with John to try to get both their lives on track, the movie stops fretting and shows a straightforward, committed side. Both Penns do great stuff in these scenes, and “Flag Day” starts going to some non-commonplace emotional stations.

But. Then. There’s the finale. Which, as one can learn on the Interwebs, is actually true to the facts concerning the end of John Vogel’s career. But which afford Penn the opportunity to do some of the most egregious grandstanding he’s done as both a director and an actor. Does he turn that opportunity down? No he does not. And as such, I doubt you’ll see a more ridiculous ending to a movie this year than this one. 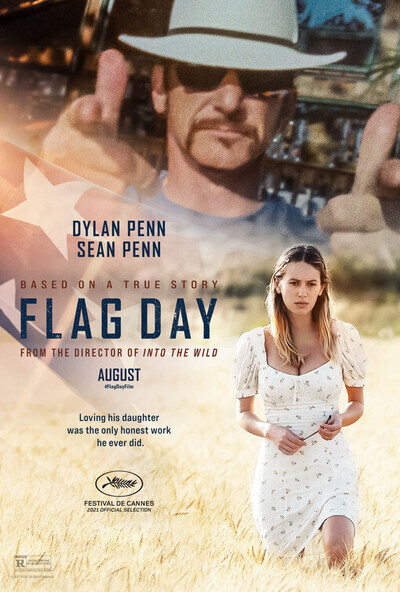 Rated R for language, some drug use and violent content.

Writer (based on the book "Flim-Flam Man")