“Five Days at Memorial” may technically be a historical drama, but it often feels more like a horror show. The Apple TV+ mini-series captures in horrific, you-are-there detail what it was like at Memorial Hospital in New Orleans in the five days after Hurricane Katrina. In fact, the first five episodes play out with one day per episode, as increasingly impossible decisions had to be made. That stretch of “Five Days at Memorial” is some of the most harrowing and well-made television of the year. The final three episodes of this eight-chapter event are less effective, shifting focus to the investigation into the 45 deaths at the hospital as people looked for someone to blame and cramming in so many ideas that it could have been an entire second season. This section also tends to melodrama and speechifying that the other part of the season wisely avoids, likely because it's trying to do a lot in three episodes with brand new central characters. It’s not bad television by any stretch, but the truth is that the five days speak for themselves, presenting a literal nightmare in a way that’s enlightening, empathetic, and unforgettable.

An adaptation of Sheri Fink’s Five Days at Memorial: Life and Death in a Storm-Ravaged Hospital has been in production for years. In fact, it was once very nearly a chapter of Ryan Murphy’s “American Crime Story” series with, of course, Sarah Paulson in the lead role. But that version fell apart, ending up in the offices of Carlton Cuse (“LOST”), who brought on the brilliant John Ridley (“12 Years a Slave”) to collaborate. Apple TV+ was interested in that version of this story, and the first three episodes premiere on the streaming service this Friday, just short of 17 years after Katrina made landfall.

Ridley and Cuse set up the premiere of “Five Days at Memorial” with actual news footage of the impending storm, sometimes cutting it directly into scenes. For example, an old man looks out a window at the increasing chaos and it’s edited together with actual shots of the storm. It helps add veracity to the early scenes, which, again, play out like a horror movie because we know the trauma that’s about to unfold. The show takes an ensemble approach to what happened next at Memorial Hospital, bouncing around the hospital as it intercuts people dealing with increasingly impossible situations such as Dr. Anna Pou (Vera Farmiga), an incident commander named Susan Mulderick (Cherry Jones), Dr. Bryant King (Cornelius Smith Jr.), nurse manager Karen Wynn (Adepero Oduye), and many more.

Some might forget that the end of the storm was really the beginning. At first, it appeared that the brunt of Katrina had spared New Orleans, and “Five Days at Memorial” wrestles with how many mistakes were made after the hurricane, in those days when the levees broke, water started to rise, and everyone who should have acted couldn’t figure out what to do next. When the generators went out, nurses and doctors scrambled to get patients out, but the horrendous governmental response to the crisis didn’t help, and neither did the dangerous conditions all around the hospital. By the fourth day, conversations were unfolding about what to do about pain management. In one scene, different color armbands are put on patients depending on if they thought they could be saved or not. As Wynn says, “In those last days at Memorial, all there was was misery.”

After the evacuation, the government who failed to provide rescue for these people chose to prosecute a few of them when headlines about dozens of dead bodies demanded a scapegoat. The ever-reliable Michael Gaston and Molly Hager take center stage in the final three episodes as the people investigating Dr. Pou and her team for the loss of life at Memorial. The tight focus of the days at Memorial gets a little diffused, even if Gaston is typically excellent. He presents a man startled and outraged by what he discovers happened, and connects it well to the grief this man carried into the investigation.

“Five Days at Memorial” is filled with taut scenes of smart dialogue that sounds like how adults really speak in crisis moments, a mix of uncertainty, intelligence, and fear. It helps to have a uniformly strong cast like this one. Standouts include Gaston and the excellent Cherry Jones, who deftly depicts a woman who learns too late that her operation doesn’t have a plan for something like what happened in New Orleans—and neither does anyone else. Of course, Farmiga is always good too.

This show can be an incredibly tough watch, especially in the middle episodes when choices regarding pain relief, possibly of the permanent kind, come into play. I do not recommend binging it for anyone’s emotional stability—even those first three could be rough in one sitting—but this is rewarding dramatic television, the kind of show that takes history from the page and brings it to life, honoring both the dead and the people traumatized by Mother Nature and bureaucratic incompetence.

As headlines about natural disasters seem to increase with each passing year, the truth is that there will likely be another Memorial Hospital situation in this country. So much of the human cost of what happened in New Orleans has yet to be fully accounted. “Five Days at Memorial” should help correct that. 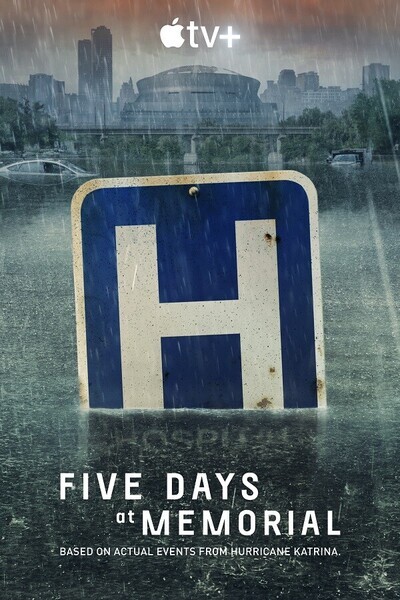