Given this movie’s punchily obvious trailers, given the fact that its theme is similar to that of a lot of subpar entertainments, given that the producing entitites of Warner Brothers and New Line have teamed up to concoct a large number of cruddy comedies over the past ten years (“Life As We Know It” and “Due Date” spring to mind/are stuck in my craw depending on how you wanna look at it), and given the fact that said studios didn’t deign to show this movie for critics until Wednesday evening, it might be reasonable to infer that “Fist Fight” is gonna be a reasonably weak and mediocre crude yuk fest.

But wait. It’s not. Yes, “Fist Fight” has enough crude sexual humor to fill two such mediocrities. But it’s also a consistently intelligent (or at least bright), coherently constructed comedy that is on occasion a rather pointed critique of the American education system in the early 21st century. Don’t let that keep you away, though. It’s more often than not really funny.

It’s the last day of school at Roosevelt High, located in a suburb in Georgia, and this is apparently “Prank Day.” Roosevelt’s students aren’t academic or sports overachievers, but they’ve got mischief down. This merely frustrates milquetoast English teacher Mr. Campbell, played by Charlie Day. But it infuriates hot-tempered history teacher Strickland, played by Ice Cube. A classroom contretemps leads to a faceoff for the two teachers with the irascible principal. Campbell snitches to save his job, and Strickland vows an “I’ll see you after school” revenge. Strickland’s advantage in this contest—his mysterious bearing has given rise to many intimidating backstories about the teacher—have Campbell contemplating a new kind of doom. And he’s already got a potential firing, a pregnant wife, and an insecure daughter who’s enlisted him to perform at her talent show to worry about.

All these tropes are pretty familiar, but they’re also all handled in ways that are more satisfying (and logical) than I’ve ever seen in such product. The movie, directed by Richie Keen from a script by Van Robichaux and Evan Susser (Max Greenfield has a story credit with that duo), packs an unusual amount of nuance into what’s on the face of it a pretty unsubtle premise. Despite being what seems to be a near-maniac, Strickland is the character who occupies the moral high ground in this conflict. Day’s Kaufman comes to realize, via Strickland’s admittedly unusual example, that the go-along-to-get-along attitude he’s adopted does a disservice not only to himself but to the students he’s supposed to be serving. The fight eventually turns into an opportunity to shake up the system a little bit.

But let’s not get carried away with the stresses on social significance here. The movie prudently packs a lot of funny bits, each one reliant on the particular skill set of a particular performer. Tracy Morgan is in full irresistible Morgan mode as a not-all-there athletics coach. Christina Hendricks is perfect as a dryly unhinged French teacher. Dean Norris, as the principal, is being followed by a mariachi band all day on prank day, and his level of irritability is commensurate with that. Kumail Nanjiani does very clever work as a generally disinterested school security guard. Austin Zajur makes his angel face go smarmy for his turn as a manipulative student. And Jillian Bell nearly steals the movie as an inappropriately horny guidance councilor, making the most of the fact that she has the lion’s share of “did she really say that?” lines. Their performances help the movie fly by, as does the work by Day and Cube, who are two of our finest comic actors as far as I’m concerned. I am also grateful for the fact that “Fist Fight” feels like a movie—a narrative with a beginning, a middle, and an end that all have something to do with each other, as opposed to pictures like “Pitch Perfect” and “Neighbors” and their sequels, which to me all play as a collection of bits slapped together by an Avid editing machine set to autopilot, if Avid editing machines have such a setting. Just as Mr. Campbell stands up for pedagogy, “Fist Fight” stands up, at least a little bit, for storytelling. 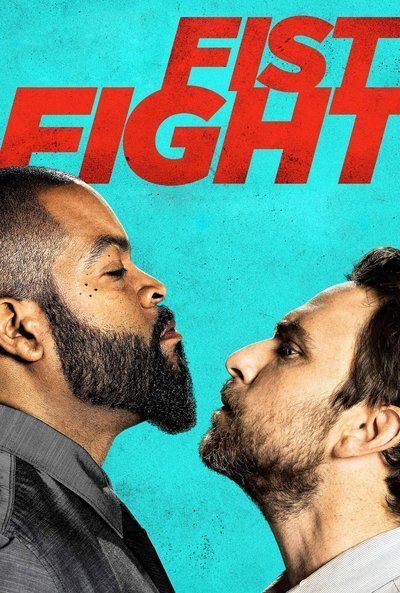 Rated R for language throughout, sexual content/nudity and drug material.