First They Killed My Father

Angelina Jolie's "First They Killed My Father" is far and away her best work as a director: a rare film about a national tragedy told through the eyes and mind of a child, and as fine a war movie as has ever been made. Adapted by Jolie and co-writer Loung Ung from Ung's memoir about her family's experiences after the Khmer Rouge took over Cambodia, it stands apart from most work in this vein not just because of what it does so well, but because of what it refuses to do.

There are emotionally powerful moments, particularly near the end when you start to see some light at the end of the tunnel, but there's little in the way of canned Hollywood uplift. But every image and feeling are anchored to the point-of-view of Ung, played by the remarkable young actress Sareum Srey Moch. She was five when the Khmer Rouge captured Phnom Penh and seven when she made it out, her young mind stained by memories of hunger, brutality and sudden death. She learned skills that no child should know, like how to plant land mines, fire an AK-47, and drive a spear into a Vietnamese soldier's chest.

The movie kicks off with a prologue alluding to how American carpet bombing of Cambodia during the closing years of the war helped create a power vacuum that vicious people rushed to fill. This is related through documentary and news clips of bombers incinerating forests, U.S. troops understandably expressing little interest in or animosity toward Cambodia, then-President Richard Nixon insisting that there is no American war there, and then-Secretary of State Henry Kissinger callously promising a "final solution" in the region. The blend of languages in this section reinforces the idea that this era was a tragedy of international significance, regardless of whether people who were alive at the time paid attention.

Luong's story begins in relative peace, with the heroine and her bourgeois family, headed by a military police officer father (Phoeung Kompheak), in the capital, wondering what changes the end of the U.S. war will bring. The Khmer Rouge, a splinter of the Vietnam People's Army of North Vietnam led by future dictator Pol Pot, rolls into the city, crushing the remnants of the country's weak official government and initiating a purge that would claim millions of lives. Loung's father sees the writing on the wall and leads his wife (Sveng Socheata) and children from the city.

From that point on, "First They Killed My Father" becomes a survival story about a suddenly powerless family doing whatever it takes to get through the day. Their efforts are shadowed by the knowledge that not all of them will make it out alive, and that even outwardly unremarkable interactions could lead to the family being separated, imprisoned, brutalized or murdered. The early scenes of Luong's mother, father and siblings divesting themselves of most possessions (including some beloved dresses and toys) are all the more vivid for being underplayed. This dry-eyed reportage continues throughout the film, ratcheting up toward operatic or tragic heights only when Loung is at her most distraught.

It's impossible to properly appreciate the impact of this story without acknowledging the filmmaking's role in summoning it. More so than almost any recent American feature made at this budget level, "First They Killed My Father" creates a distinct visual vocabulary that seems to emerge organically from the story, then pursues it consistently, never breaking away without reason. With the exception of a few aerial or crane shots that provide a sense of geographical context, and some high-angled overhead shots that evoke the eye of an indifferent God, most of the film is captured with a handheld camera that communicates anxiety or dread but never tries to generate phony action-movie "excitement." Shot after shot after shot amounts to a simple record of actions: she walked over there; this person spoke to that person. They're all captured by cinematographer Anthony Dod Mantle in smartly composed but unfussy images, some in third person (with the heroine in the frame), others in first (the camera representing what Loung sees). The editing, by Xavier Box and Patricia Rommel, reconciles these perspectives in such a supple way that we seem to be outside and inside the story all at once, thinking about it even as we're feeling its impact.

Every now and then, Jolie gives us a flashback or fantasy, often focusing on the heroine's memories of a time when the family were comfortable, healthy and carefree. The color in these shots is oversaturated, aglow with yearning. When the film snaps back into present tense and rejoins Loung and her family in an agrarian work camp/"re-education" facility where the earth, sky and trees seem to have been bled of color, the loss of pigmentation stands in for the loss of hope.

In time, the reason for this meticulous style becomes clear: this is a tale recollected in tranquility from some point in the future, so of course it would switch on a dime between immediacy and detachment. When you remember trauma, you see a dark picture but also the philosophical frame you've built around it. Everything seems to be happening a long time ago but also right now.

The script mostly avoids the particulars of Cambodian-Vietnamese animosity, presenting re-education sessions filled with anti-Vietnamese invective as examples of wartime conditioning and mind control. The Khmer Rouge's constant praising of the utopian ideals of Communism is undermined by what the heroine sees: the vegetables and rice being taken from the camp workers and sent to the front lines to feed combat soldiers; the meager spoonfuls of broth that the farm slaves stir in their bowls at night; the crude pleasure that low-level flunkies take in humiliating underlings, their sadism empowered by allegiance to the state; the plump beetles that the father roasts over a fire, then serves to his starving family like chestnuts. The script is less interested in what it all meant, geopolitically speaking, than how it felt to live through it: the sense of dislocation and uncertainty, the deprivation and fear, the artillery shells tearing through treelines at night and jolting sleepers awake; the mines blasting bodies into the air and setting them down without legs.

The ace in Jolie's deck here is the knowledge that a girl as young as Loung can't comprehend the larger meaning of what's happening to her, and is therefore unlikely to expend precious emotional energy connecting cause-and-effect dots or lamenting what was lost. It's an almost entirely experiential movie. Whatever occurs automatically becomes the new normal for the heroine, and she does her best to adapt to it, even when she's stricken by grief, panic or rage. Whether Luong is hearing her mother warn her and her sisters that they can't take party dresses on the road, watching a camp worker beat a hungry child for stealing vegetables, or inspiring a group of kids to kill, skin, roast and eat a snake, the film maintains a culturally neutral attitude. It's never, "Oh, how horrible" or "Isn't that strange and different?" but simply "Here's what happened next."

This is not a "triumph of the human spirit" movie with syrupy strings and inspirational speeches. Marco Beltrami's score never appears unless it has something to add to the images. The majority of scenes play out with natural sound: marching boots, helicopters, gunshots, bombs, birds, insects, cheering crowds, whispered conversations, shrill propaganda speeches, river water flowing downstream. There are no awkwardly inserted scenes with U.N. observers, doctors or journalists, devised to justify casting American or English actors in a film that doesn't require their presence.

It's a film that recreates a bleak time and place with a journalistic eye for detail, catching fleeting, at times surreal instances of humanity amid horror—particularly when it catches kids acting like kids, playing in river water, stretching a hand up towards a military helicopter soaring overhead, becoming fixated on the soft clang-clang of a teakettle bouncing against a knee during a walk. There are many moments where somebody who has no practical reason to smile at Loung smiles at her. She smiles back because that's what kids do, even when they know the adult standing over them could kill their sister, mother or father for no reason at all.

The movie channels the hardest parts of some of the toughest great films ever made: the scenes in "Los Olvidados" and "Pixote" of slum kids playing in ruins; the gallows humor of World War II films built around kids, especially "Hope and Glory" and "Empire of the Sun"; the documentary-immediate sections of "Platoon" that showed the tedium and indignity of war: mud, rain, leeches, insomnia.

Jolie and her collaborators move through Loung's story so economically—never lingering on a scene or image longer than is necessary to make a point—that the fear and pain inherent in the material is always counterbalanced by the intellectual excitement of seeing a world re-created in detail, from the ground up. Jolie is certain to be criticized for being a rich white American directing a film about Cambodian genocide, and not without cause, but it's also obvious that she's done everything possible, short of not directing the movie, to remove herself from center stage, put the spotlight on her heroine, and keep it there. The cast is comprised of Cambodian actors whose names mean nothing internationally, and they don't speak English with a vaguely "Asian" accent, but subtitled Khmer. The opening and closing credits are presented simultaneously in Khmer and English; Khmer always comes first.

That this movie even exists is a small miracle. That it seems to have been made without compromise and largely without ego makes it even more rare. 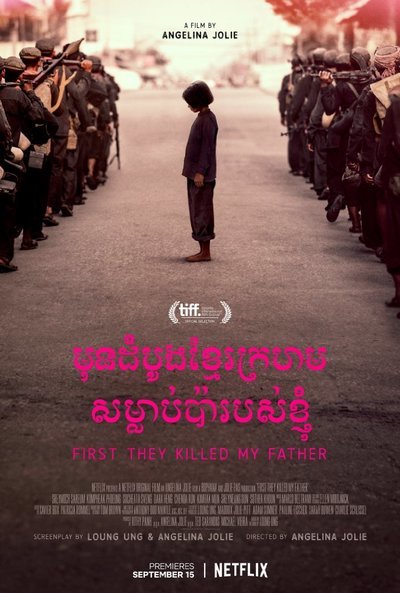 Writer (based on the book "First They Killed My Father" by)