Swooping into an antique Germany via an initial descent-through-the-clouds that recalls "Triumph of the Will," Russian director Alexander Sokurov continues his "Faust" with a visit to the laboratory of his eponymous anti-hero, who, shadowed by a servile assistant, is busy carving up a naked cadaver. The constantly moving camera glides from a close brush with the corpse's genitals to the organ removals being effected by Faust, and we soon learn that he is not out to understand the body's physical properties but to discover what he believes it contains—the seat of the soul.

The existence and fate of the soul were of course central to Goethe's "Faust," the nominal source of this very free, German-language adaptation, but it's safe to say that the concerns of the film largely aren't those of the play. Like "Frankenstein," Goethe's tale, though derived from older sources, is one of the literary ur-myths of modernity, divining the demonic, destructive potential lurking within mankind's prideful rationality. But it would be hard to deduce that any of this greatly interests Sukorov.

As for what does interest him, the filmmaker describes "Faust" as the culminating capstone of a tetralogy, yet all three previous films—"Moloch" (1999, on Hitler), "Taurus" (2001, on Lenin) and "The Sun" (2005, on Hirohito)—depict real-life 20th century tyrants rather than a Promethean character of legend and literature. Does Sokurov see Faust as the great prototype of the past century's murderous megalomaniacs, ready to sacrifice his own soul, not to mention the world, to satisfy his ego's cravings?

Actually, debates over the intended meanings of this "Faust" have raged since it surprised observers by winning the Golden Lion at Venice in 2011, dividing cinephiles into camps of ardent admirers and dismissive detractors. To try bridging some of those opinions, it's perhaps useful to return to the dichotomy that underlies that initial scene and suggest that, while the film's soul (its meaning) is no doubt destined to remain frustratingly opaque, its body (Sokurov's style) contains various sorts of pleasures, fascination and even some meaning of its own.

Indeed, compared to many Sokurov films, this one has an enlivening paradoxicality: it's morbid but upbeat, grim yet rapturous. With its constant motion and elegant reframings, the camera gives the proceedings an almost balletic breathlessness, while painterly influences—chiefly Bosch and Brueghel—infuse the film's succession of ornate sets (suggesting 19th century Germany, though no epoch is specified) and anchor a muted but wondrously subtle palette of grays, greens and browns.

Sonically, the production is just as rich, with a densely layered soundscape sculpted around the near-constant accompaniment of Andrei Sigle's Gounod-influenced score.

Sokurov's main cast also enhances his enterprise. Although this Faust has little of the metaphysical reach of Goethe's (per the suggestion of Russian critics, he's far more post-Soviet than German Romantic), Johannes Zeiler's strong performance offers a muscular vision of a man pursuing his own damnation as deliberately as any Charles Bukowski protagonist. His great antagonist, a moneylender named Mauricius, is far more phlegmatic and pragmatic than Goethe's witty Mephistopheles, as well as grotesquely bizarre when seen nude, yet the character works due to the punk-rock intensity of actor Anton Adasinskiy. And Isolda Dychauk, a Botticellian beauty, is undeniably credible as the woman for whom Faust willingly signs away his soul.

Do all these cultural reference points—cinematic, literary, painterly, musical, what have you—add up to a masterpiece? Obviously not, per se. But they do help explain why Sokurov's work can excite a cinephile's continuing interest while simultaneously sparking his skepticism. As for the potential enjoyment in that dialectic: As one who has never stopped seeking out the prolific director's work while also finding some of it turgid and tedious, I found "Faust" among the most engaging and accessible of his films. Others are free to disagree. 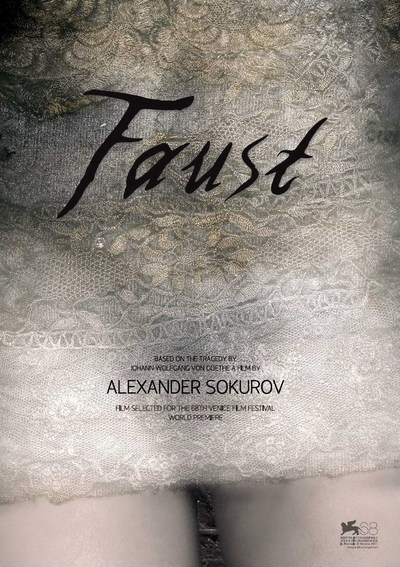