“Father Figures” is what you might call a bastard comedy, and not just for the fact that it was once boldly titled “Bastards” and tells of two twins (played by Ed Helms and Owen Wilson) road-tripping to find their biological father. As a kicked-around project originally meant for a November 2016 release, and then a January 2017 release, and now coming out in time to be the comedy alternative to “Star Wars: The Last Jedi,” it has that uncertain lineage in its very construction. Filled with insincere wackiness and sappiness, “Father Figures” never quite figures out whether it wants to be a raunchy, zippy road movie or a more dialogue-driven dramedy. Despite having no personality of its own, this movie just yearns to be recognized at all.

Even the two leads seem confused about what kind of movie they’re in. Helms, playing a depressed, divorced father and a gastroenterologist, acts like he’s in a cloudy Sundance indie, but is unable to make himself an interesting leading man despite his desperation to know the identity of his father. He’s accompanied by Wilson, whose first line in the movie is “life is so crazy,” and whose wide-eyed behaviors are not dissimilar to the type of work he got in 2006 after “You, Me and Dupree” opened.

“Father Figures” portrays these guys as pathetic (Helms’ Peter) and/or irritating (Wilson’s Kyle), and their on-screen mother Helen (Glenn Close) brings no love to the proceedings. For decades, Peter and Kyle have thought that their father was dead—but when Peter thinks he saw their father in an episode of “Law and Order: Special Victims Unit,” Helen reveals (on her wedding day to Harry Shearer’s Gene) that their father is Terry Bradshaw. That proves out to not be the case, as the floating-head photoshopped poster will indicate, but the brothers follow a very thin thread as various men (Bradshaw, Ving Rhames, J.K. Simmons) then try to remember when they could have slept with Helen during the Studio 54 days of the 1970s. June Squibb briefly swears in a way that's kind of funny, and Katie Aselton is given a thankless love interest role. The only true spark in this “anyone can write comedy” script is in a twist at the end, but it seems to work in part because the story wears you down with its simple, tedious quest for two hours.

“Father Figures” is the latest textbook in how to make a lazy Hollywood comedy, placed slightly higher than theatrically-released Adam Sandler movies and “A Bad Mom’s Christmas” because it doesn’t always look like it takes place inside a commercial. “Father Figures” is filled with the type of stale-yet-crowd-approved bits with which weak comedies kill time: abruptly raunchy elderly people, jokes about people who are special needs, clownish Boston accents, and even an African-American character (Katt Williams) who is later treated like magic. When physical comedy is involved, with people getting abruptly hit, sucker punch brawls and someone getting shot with a tranquilizer dart, “Father Figures” aims for cheap shock laughs.

Debut director Lawrence Sher, previously a cinematographer for Todd Phillips movies, complements this weak sense of humor with a look that’s bright-yet-bland, seemingly half of the movie made up of B-roll shots of cars driving and monotonous soundtrack choices. The movie is staunchly disinterested in the visual potential of comedy, with many of its scenes involving these previously funny actors hanging out and talking in circles, like a bad Noah Baumbach movie that also wants to joke about cat testicles. “Father Figures” manages to be inert both with its scenes of possible dad-bonding and of shoehorned conflict, while its wholesale fabric of “family” provides no sense of warmth.

Despite being an R-rated family movie that features Ving Rhames saying the phrase “dick whisperer," “Father Figures” has no edge, its interest in absurdity only leading to numerous teeth-gnashing contrivances, aside from the very plot itself. There’s a scene in this film in which a man in a rest stop bathroom stall encourages Wilson to urinate on his kid, who has been urinating on him. To teach a lesson, the dad reasons. So, Wilson does.

For a venture like “Father Figures,” it feels more fitting to judge the movie more by its studio, as if Sher weren’t the lead artist but Warner Bros., who have a product that's been chopped up, and packaged so amorphously it could be sold in any way at any time, an investment meant to take up marquee space. The final result, with at least two considerably-sized sequences hinted at in the trailers but not in the theatrical cut (involving a dance and Owen Wilson being chased by field hockey players), is defeated by its dull objective to feel as crowd-pleasing as possible. “Father Figures” is not just painfully anti-charming, it is transparently desperate. 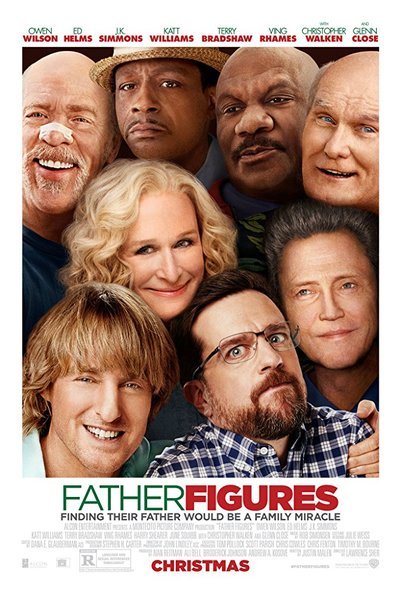 Rated R for language and sexual references throughout.