While cinematic thoughts regarding Valentine’s Day naturally drift towards straightforward love stories and romantic comedies, the holiday has long proven to be a fertile period for releasing horror movies as well. When the 1931 version of “Dracula” came out, for example, it debuted on Valentine’s Day and was initially promoted as a bizarre romance. Decades later, “Silence of the Lambs” famously hit theaters on that day as well. And there have even been horror films based specifically around the holiday itself, such as the underrated 1981 Canucksploitation classic “My Bloody Valentine,” its not-without-merit 2009 3D remake, and the forgettable 2001 Denise Richards joint “Valentine.”

Therefore, I suppose it makes perfect sense for a horror item like “Fantasy Island” to appear on Valentine’s Day in the hopes of making a few bucks off of couples looking for something to do. Alas, they would be far better staying at home with a pan of macaroni and cheese than enduring this tedious botch, a film that is demonstrably worse than any of the ones that I have cited in this paragraph and which contains less raw terror in its entirety than “Sonic the Hedgehog” during any five minutes of its running time.

“Wait,” some of you may be wondering at this point, “are we talking about the same 'Fantasy Island' here?” Indeed we are. For those who have either forgotten about its existence or have never heard of it at all, “Fantasy Island” was a television show that ran from 1977-1984 in which Ricardo Montalban played Mr. Roarke, the head of a mysterious island resort who, along with the assistance of aide-de-camp Tattoo (Herve Villechaize), would each week greet a new crop of guest stars—ranging from newcomers to aging stars in between gigs appearing on “The Love Boat”—and somehow make their deepest (though still suitable for television) fantasies come true. Since virtually every television show with a recognizable name seems to have been transformed into a feature film property, it was perhaps inevitable that “Fantasy Island” would follow suit. However, in what has to be one of the more bewildering moves in recent Hollywood history, the rights to the project somehow landed with Blumhouse, the production company responsible for such horror films as the “Purge” and “Paranormal Activity” series and many, many more.

The set up will seem reasonably familiar to those who actually recall the show. A plane arrives at a mysterious island resort presided over by Mr. Roarke (Michael Pena), who announces to his guests, all of whom have apparently won a contest, that they will be able to have their greatest fantasy fulfilled with only two caveats—each guest gets only one fantasy and they must see said scenario through to its “natural conclusion.” Obnoxious alpha male JD (Ryan Hansen) and brother Brax (Jimmy O. Yang) want a chance to live the high life, presented here as what might have occurred if the Fyre Festival had gone off as planned. Former cop Patrick (Austin Stowell) wants to live out his dream of being a soldier. Self-loathing Gwen (Maggie Q) would like to take back the moment when she turned down her boyfriend’s marriage proposal because of her sense that she didn’t deserve happiness. The fantasy of Melanie (Lucy Hale) is a little more cut and dry—having spent her childhood being tortured by a bully (Portia Doubleday), she wants to get her revenge on her. Suffice it to say, these scenarios do not play out quite as planned, and it becomes quite apparent that the island contains any number of deadly secrets, not to mention Michael Rooker in what can only be described as “the Michael Rooker role.”

Truth be told, the idea of doing a “Fantasy Island” film exploring the darker side of the show’s premise is not that bad. The problem here is that the horror aspects—which includes zombie-like creatures, a torture sequence, and numerous eyeballs dissolving into black goo (though never in measures that might threaten the all-important PG-13 rating)—have not been placed into the mix in an effective manner. Frankly, it feels as if the project started off as a more straightforward screen version and the writers got so annoyed with their own one-note characters that they just decided to start trying to kill them off in various weird ways. The whole thing is completely nonsensical, even by the standards of what one might reasonably expect from a “Fantasy Island” movie, and director/co-writer Jeff Wadlow (who previously directed “Truth or Dare,” another Blumhouse joint with Lucy Hale involving a vacation that goes violently sideways) seems convinced that if he just keeps throwing more inanities into the mix (yes, there is a big twist and yes, it is an exceptional dopey one), no one will notice how utterly boring the whole thing truly is.

So yes, “Fantasy Island” is a terrible movie—this probably won’t come as a shock to most people—but more than that, it seems to have been made with absolutely no one in mind. Anyone who might have actually wanted to see a straight-up adaptation of the show will be put off by the way that it lurches into more ostensibly horrific areas. Those in the mood for a horror film will be annoyed by the pedestrian scares and its pilfering from other examples of the genre. Fans of actors like Michael Pena, Maggie Q and Lucy Hale (who is hereby advised to let any further calls from Wadlow go directly to voicemail) will be put out with how thoroughly they are wasted here. Look, I am no “Fantasy Island” fanatic by any means—I’ve only seen two episodes in my life, both of them featuring Michelle Phillips as one of the guest stars, strangely enough—but even it deserved better than this brainless product that's no sane person’s fantasy of a half-decent movie. 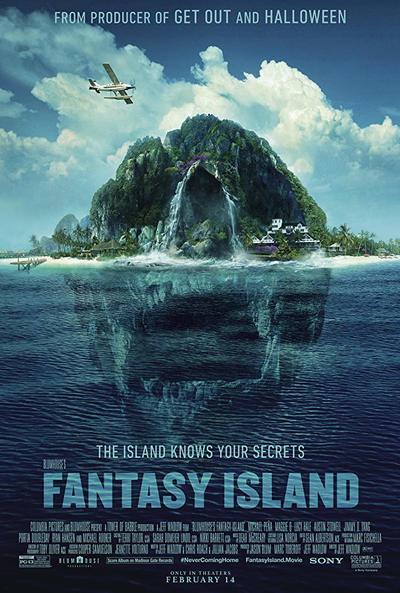