“Fallen” is the kind of horror story I most enjoy, set in ordinary and realistic circumstances, with a villain who lives mostly in our minds. Movies like this play with our apprehensions, instead of slamming us with freaky special effects. By suggesting that the evil resides in the real world, they make everything scary; one of the movie's best moments is supplied by a pop machine.

Denzel Washington stars as John Hobbes, a detective who works with his partner, good old Jonesy (John Goodman), on murder cases. The film opens with a flashback (“I want to tell you about the time I almost died”), and then cuts to Death Row, where a vicious killer (Elias Koteas) faces the gas chamber. Hobbes is among the witnesses as the poison capsule drops, and the killer uses his dying breath to sing “Time Is on My Side.” And then, this is curious, there is a point-of-view shot from above the dead man's head, and we wonder whose point of view it could possibly be.

Having established the possibility of the supernatural, “Fallen” is at pains to center Hobbes firmly in a real world. The screenplay, by Oscar nominee Nicholas Kazan (“Reversal of Fortune”), shows us Hobbes at home (he lives with his brother and nephew) and at work (Jonsey is a good pal, but a lieutenant played by Donald Sutherland seems to know more than he says). The story develops along the lines of a police procedural, with the cops investigating some strange murders, including a corpse left in a bathtub while the killer apparently enjoyed a leisurely breakfast.

Hobbes notices an incredible coincidence: The dead man in the bathtub is the same man who walked past him last night, drawing his attention with his singular manner. Now that's strange. And strange, too, are other developments, including the verdict of a linguist that the gas chamber victim's words, on a videotape, were spoken in ancient Aramaic, a language he had no way of knowing.

There is a connection between all these threads, which we discover along with Hobbes. (The audience discovers it before Hobbes--but we have the advantage, because we know he's in a horror movie and he doesn't.) Among the characters Hobbes encounters on his search for missing threads, the most interesting is the daughter (Embeth Davidtz) of a cop who committed suicide after being accused of the kinds of offenses that Hobbes himself now seems to face. “If you value your life, if there's even one human being you care about,” she tells him, “walk away from this case.” Did her father leave a warning behind? What is the meaning of the word “Alazel,” scrawled on the wall of the basement where he killed himself? Denzel Washington is convincing as a cop, but perhaps not the best choice for the role of Hobbes, which requires more of a noir personality. There's something essentially hopeful and sunny about Washington, and the best noir heroes encounter grim news as if they were expecting it. There should be, at the core of the protagonist in any noir story, guilt and shame, as if they feel they deserve their fate. Washington plays Hobbes more like a conventional hero, and doesn't internalize the evil.

As for the rest of the characters, perhaps they are as they seem, perhaps not, at any given time. The evil presence in the film moves from person to person, and there is a chase scene in a crowd that is eerily effective, because there's no way to tell who the pursuer is. See the film, and you'll understand.

“Fallen” was directed by Gregory Hoblit, who also made “Primal Fear” (1996). Both films contain characters who are not as they seem, and leads who are blind-sided by them. “Fallen” reaches further, but doesn't achieve as much; the idea is better than the execution, and by the end, the surprises become too mechanical and inevitable. Still, for an hour “Fallen” develops quietly and convincingly, and it never slips down into easy shock tactics. Kazan writes plausible, literate dialogue and Hoblit creates a realistic world, so that the horror never seems, as it does in less ambitious thrillers, to feel at home. 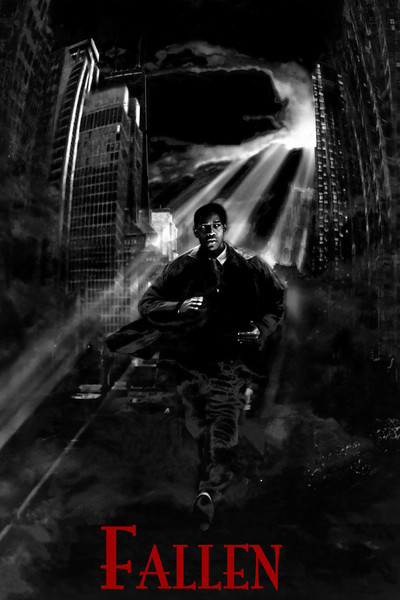