The title of Joe Berlinger's "Extremely Wicked, Shockingly Evil and Vile" comes from the famous post-sentencing remarks of Judge Edward Cowart to Ted Bundy, America's most notorious (to this day) serial killer. Cowart called the killings "extremely wicked, shockingly evil, vile and the product of a design to inflict a high degree of pain and utter indifference to human life." What is so interesting about Berlinger's film is how strongly it resists showing Ted as "wicked" or "evil." Bundy is never shown committing a crime. We are left instead with a terrifying void, the void of Bundy himself, a blank space where a human being should be. Knowing the details of Bundy's life—his shame at being born out of wedlock, for example—only takes us so far. Lots of people are born out of wedlock. Only one became Ted Bundy. Refusing to explain Ted Bundy is the strongest possible choice Berlinger could have made because it destabilizes reality. The film itself gaslights us, and this is where Berlinger and Zac Efron—an inspired choice—are powerful co-creators.

Loosely based on The Phantom Prince: My Life with Ted Bundy, the memoir of Bundy's long-time girlfriend Elizabeth Kloepfer (played here by Lily Collins), "Extremely Wicked" starts in Elizabeth's point of view. A single mother, holding down a secretarial job, Liz expresses to a friend her insecurities about finding a man. What man wants a woman with a kid? A predator like Ted Bundy is quick to sniff out insecure women like Liz. She meets him at a bar, and he charms her. Easily. She brings him home. They don't have sex. The next morning, she finds him in the kitchen with her baby daughter, and he's making breakfast, wearing a yellow apron. Liz can't believe it. Is this guy too good to be true?

How something happens is more important than what happens, particularly in a story where the details are well-known. "Extremely Wicked" mixes Liz's point of view with Bundy's, but there are some crucial differences in approach. Berlinger puts us inside Liz's growing terror that she's been living with the guy who maybe did the horrible things she's seeing on the news. Their happy relationship, shown in home movie footage, is intercut with extant local news reports of girls gone missing in the area, girls showing up dead, two brazen abductions in broad daylight. The police sketch released to the public looks kind of like her boyfriend, but Liz can't be sure. Berlinger follows Bundy, too, but in the Bundy sequences, we only see his outer behavior, what he does. This captures Bundy's opaque quality, the sense you get of a camouflage hiding his true nature. Bundy insists—with increasing aggravation—that he has been wrongly accused.

A lesser film would have intercut the happy home scenes with scenes of Bundy killing college co-eds, just to remind us of Bundy's evil. A lesser film would have provided flashbacks to his childhood, in an attempt to explain why. Instead, we are banished from his secret life, just like Liz is banished from it. We see him as she sees him, and he is a dazzlingly disorienting figure. This is what Efron taps into; this is what Efron understands.

Efron became a child star when a generation of girls lost their minds over "High School Musical." (Teenage girls are often the first to recognize who will be the Next Big Thing, and their screams of ecstasy are ignored or mocked. But teenage girls picked out Elvis Presley, they picked out Sinatra, they picked out Kristen Stewart and Robert Pattinson. Maybe, instead of belittling teenage girls' frenzies, we should follow the sound to see what the fuss is about.) Efron's transition from teen idol to adult actor has not always been smooth. His performance in the Seth Rogen comedy "Neighbors" had strangely deep stirrings, and critics took note. He was exhilarating in "The Greatest Showman," because he got to sing and dance. (Classic Hollywood would not have been confused about what to do with Efron.)

As Ted Bundy, Efron gets to use his natural assets—his face, his body, his charisma—and he gets to use them full-bore. Often really beautiful actors feel the need to "ugly" themselves up in order to be taken seriously. Efron so far has resisted. He has old-school movie star wattage and an ability to project his essence through the screen. Using his animal charm in service of Ted Bundy is so disturbing, but it works in subtextual ways, providing the "missing piece" when people ask why and how Bundy could have happened. It's hard to be as charming as Efron is. Try it and see for yourself. Efron doesn't telegraph to the audience Bundy's sinister motives, he does not distance himself from Bundy's charming modus operandi. His smokescreen is impenetrable. There are moments when Efron looks so much like Bundy (especially with the beard), it is truly eerie, but it's more than just an outer transformation. Occasionally, there is a brief glimpse on his face of what Bundy's victims probably saw in their final moments. But Efron is in charge of when and how we get to see it. It deserves to be called a thrilling performance.

Kaya Scodelario plays Carole Ann Boone, Bundy's girlfriend during his imprisonment in Florida. Recently, the news broke that Christopher Watts, who killed his pregnant wife and two children in 2018, was being bombarded by love letters from women around the country. It's a bafflingly common phenomenon, and Scodelario, in a very intelligent performance, suggests why. If there's a void in Bundy, there's a void in Carole too. Liz's descent into alcoholism is handled well by Collins, as is the intervention of a co-worker, played by Haley Joel Osment. John Malkovich rules the roost as Judge Cowart, making Cowart's famous words bristle with real ethical loathing. The courtroom scenes lack some of the dizzying charge of other sequences, maybe because it's a re-creation of well-known footage (the entire trial was televised, a first of its kind).

Ted Bundy was executed in Florida on January 24, 1989, making this year the 30th anniversary of his death. Similar to the glut of Manson movies this year marking the 50th anniversary of the Tate-LaBianca killings, Bundy is suddenly everywhere. In January, "Conversations with a Killer: The Ted Bundy Tapes" dropped on Netflix, a four-part documentary also directed by Berlinger, featuring Bundy's 1980 tape-recorded conversations with two journalists while on death row. Many seemed disturbed at the focus on Bundy's looks, as though mentioning his handsomeness was akin to endorsing his diabolical crimes. A month or so later, the first trailer for "Extremely Wicked" dropped, and the online reaction was negative. According to its critics, the trailer glorified Bundy, it glorified Efron's cuteness. What was fascinating about all of this, and why I'm mentioning it, was that these conversations were basically replicating the media firestorm back in the 1970s, when the horror of Ted Bundy's killing spree became known. The focus on his looks struck many as unseemly back then, too. Women showed up in court for his trial giggling like they were at a Stones concert. People were horrified. Here it all was, playing out again in 2019.

There will always be those who want art to declare its intentions with neon signs pointing down like "This is bad. Don't do this." "Extremely Wicked" rightly resists such declarations and it refuses to offer explanations. You don't ask why a tornado or a tsunami is destructive. You don't dig into a grizzly bear's past to understand why it attacks. You just know these things are dangerous and you need to avoid them. If you want to understand why Ted Bundy got away with what he did for as long as he did, watch Efron flirt with Collins in the scene where the characters first meet. Look for signs of Bundy's malevolence. Squint for evidence of his evil. You won't find it. Neither did Liz. That’s why it’s terrifying. 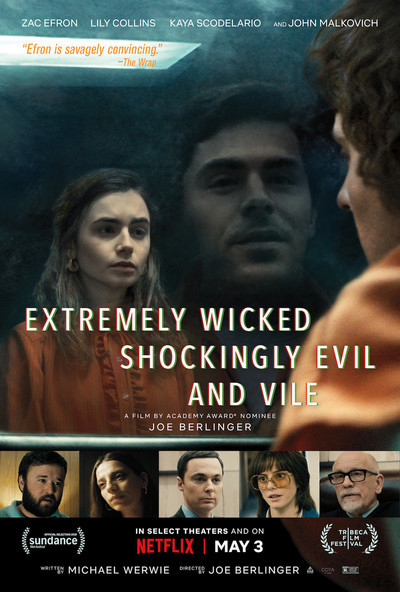 Rated R for disturbing/violent content, some sexuality, nudity and language.

Writer (based on the book: "The Phantom Prince: My Life with Ted Bundy" by)