In writer-director Jessie McCormack's debut feature "Expecting," the uptight Lizzie (Radha Mitchell) very much wants to have a baby with her husband Peter (Jon Dore), but she is unable to conceive. Her wild-and-woolly best friend Andie (Michelle Monaghan) finds herself unexpectedly pregnant.

"I don't want to have a baby, but to get rid of it at my age would be a little gauche," Andie tells Lizzie, and it isn't long before Andie offers to have her baby and give it to Lizzie. Peter, who doesn't much like Andie, is less than enthusiastic about this idea, especially when Andie moves in with them for the duration of her pregnancy. Adding to the pressure of this situation is Peter's drug addict brother Casey (Michael Weston), who just got out of rehab and needs a place to stay.

This could be the set-up for either a farce or a serious drama, but "Expecting" is a fairly laidback movie that isn't serious and isn't funny and isn't much of anything. All four of the main characters are irritating and off-putting, particularly the uninhibited Andie, who says any vulgar or insensitive or inappropriate thing that comes into her head.

During an ultrasound examination, when the nurse applies some gel to her stomach, Andie announces, "It feels like I'm being jizzed on." When she breaks wind, Andie calls herself "Gaseous Clay," and after the ultrasound, she says, "Seriously, I feel like Clammy Davis, Jr." Lizzie laughs at Andie's feeble attempts at humor, and Andie even makes a point of saying that she loves Lizzie because "you get my jokes." But "Expecting" doesn't make it easy to know how we're supposed to view Andie. At one point, Lizzie says to Andie, "I need you to get the Tourette's under control," but it's unclear if she is being serious or not. Is there actually something a little bit wrong with Andie, or is she just a generally obnoxious and unfunny person?

As presented in this movie, Andie is a seriously rude, mean, selfish person, but by the end it seems clear that we are supposed to view her as maybe a little outrageous but also worthy of love and attention. Anyone who behaved like Andie in real life would wind up being a pariah, but in "Expecting" she is finally seen as harmlessly kooky.

There is little else here but the unappealing main quartet of characters. Mimi Kennedy has three scenes as a therapist treating Lizzie and Peter, and she brightens and enlivens this film considerably, but all too briefly. It is not a good idea to hire someone as talented as Kennedy and then give her almost nothing to do. Lizzie and Peter own a recalcitrant dog named Joyce who tries to run away before the film is over, and this bitch's flight is perfectly understandable. 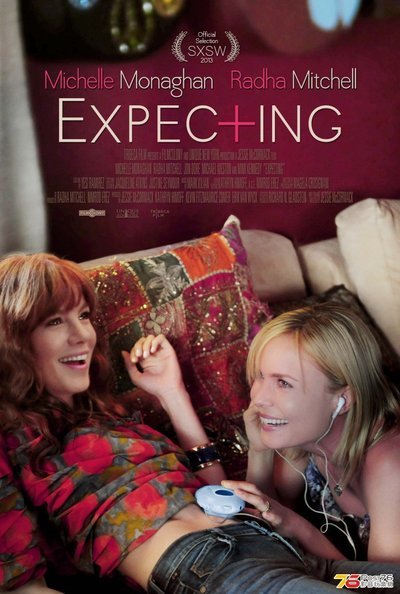