"Exotica" is a movie labyrinth, winding seductively into the darkest secrets of a group of people who should have no connection with one another, but do. At the beginning, the film seems to be about randomly selected strangers. By the end, it is revealed that these people are so tightly wound up together that if you took one away, their world would collapse.

Christina (Mia Kirshner) works in a "gentleman's club," although few gentlemen go there. She has a regular client named Francis (Bruce Greenwood). He pays her an hourly rate to come and "dance" seductively at his table. No touching is allowed in this club, but Francis has no desire to touch. What he needs from Christina is not physical. And Christina . . . what does she need? We sense an odd private bond between them.

Eric is the disc jockey in the club, spinning suggestive fantasies about the dancers, drumming up business for the tables. He was once Christina's lover. Now he watches jealously, possessively, as she lingers for hours with Francis. Zoe owns the club. It was started by her late mother, whose "sense of freedom" she admired so much that she even dresses in her mother's clothes. Zoe is pregnant, sweet, honest; she sees the club as a place where lonely people can be less lonely for a few hours. No one there is lonelier than she.

Who are these other characters? Who is the customs officer, and what is his real connection with the man who picks him up at the ballet - the man who owns a pet shop? Why does he steal precious eggs from the man's incubator? And why does Francis hire a baby-sitter to stay at his house when he goes to the gentleman's club, since he has no children? It's easy for a director to play these games all night, setting up mysteries and then revealing deeper mysteries inside of them. That is not Atom Egoyan's game. His plot for "Exotica" coils back upon itself, revealing one layer of mystery after another, but this is not an exercise in style. It is a movie about people whose lives, once we understand them, reveal a need and urgency that only these mysteries can satisfy.

Egoyan, a Canadian director whose imagination and originality have not always been under such masterful control, has been moving toward "Exotica" in his other recent films, like "The Adjuster" (1992). Of that film he wrote, "I wanted to make a movie about believable people doing believable things in an unbelievable way." It was a good film, but you could see the gears turning.

"Exotica" is his best yet, a film in which the characters seem completely real even while they seem to be acting without any apparent explanation - and then seem even more real when we understand them.

Many of the actors come from his stock company. Elias Koteas, who was the adjuster, now plays the DJ; in the earlier film he served others, but this time he serves only himself. Arsinee Khanjian (Egoyan's wife) is Zoe, the club owner, suffusing the sleazy surrounding with a gentle innocence. Mia Kirshner, an actress new to me, combines sexual allure with a kindness that makes her all the more appealing. Indeed, the intriguing thing about Egoyan's work here is the way he sets the story in a hothouse of sex, and then works around the sex, getting to the feelings, revealing how most of the characters are much nicer than they at first seem.

In the months after "Pulp Fiction" opened, I talked to a lot of people who were stimulated by its plot structure, the way it played with apparent paradoxes. Those people are likely to admire the plot of "Exotica" even more, for if "Pulp Fiction" twisted time as an exercise, "Exotica" has a reason for its method: We begin with desperation and need, and move to satisfaction and fulfillment, and at the same time Egoyan astonishingly finds a way to add melodrama, blackmail and an ingenious deception. The movie is a series of interlocking surprises and delights, and, at the end, it is heartbreaking as well. It's quite a performance, announcing Egoyan's arrival in the first rank of filmmakers. 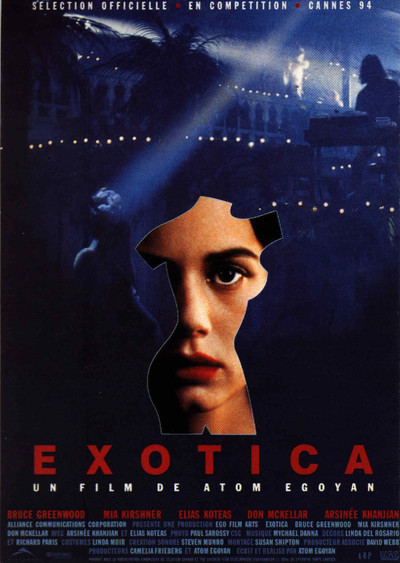