Anyone familiar with the cinema of Iranian master Asghar Farhadi is well-aware of his tendency to place the inciting incident deep into a suspense yarn, long after we’ve grown accustomed to the characters’ routines. Too often filmmakers feel compelled to shock an audience from the get-go, yet Farhadi understands the importance of immersing us in the rhythms of normalcy before they are ruptured. How less effective would the shower scene in “Psycho” have been had it opened the film rather than occurred around the 40-minute mark? Farhadi’s eighth feature, “Everybody Knows,” is also his first in Spanish, and may be his most gorgeously lensed to date. Pedro Almodóvar’s longtime cinematographer, José Luis Alcaine, fills the opening act with sumptuous, sun-kissed imagery, as a family in Madrid reunites for a wedding. Especially entrancing is the oft-beaming face of Irene (Carla Campra), a teenager whose zest for life radiates through every frame. Possessing a beauty and magnetism evocative of Hailee Steinfeld, Campra commands our attention just long enough for us to worry about her. Whether she’s driving a motorbike with reckless abandon or swinging from the rope of a bell tower, disrupting her aunt’s nuptials, it is Irene who instills in us the gravest sense of unease. We find ourselves perched on the edge of our seat, waiting for something dire to happen, and yet when it does, it is unexpected.

Far stronger than its lackluster buzz from Cannes suggested, this film is yet another testament to Farhadi’s genius in mining immense power from silence and stillness. I’ll never forget the pivotal moment in his previous picture, “The Salesman,” when the camera lingered on an open door until the audience began squirming with dread. In “Everybody Knows,” I was struck more than ever by the director’s deft approach to sound design, subtly likening the thwack of a wiper blade with the throbbing pulse of his characters as they engage in a race against time. After a title sequence set amidst the grinding gears of the aforementioned tower, where every second tics down toward an inevitable clang of bells, the word “time” juts out at us like the heightened utterance of “knife” in Hitchcock’s “Blackmail” every time it resurfaces. Paco (Javier Bardem), the owner of a successful local vineyard, notes that wine is given character and personality courtesy of time, and there’s no question Farhadi would agree that the same could be said about cinema. Time also happens to be what Paco and his old friend, Laura (Penélope Cruz), ultimately seek to buy for themselves in a desperate attempt at staving off irrevocable tragedy. When Laura’s family sullenly watches footage of her sister’s wedding ceremony mere hours after it was recorded, they might as well be peering into the distant past, where unbridled joy was still within one’s grasp.

When Paco’s nephew, Felipe (Sergio Castellanos), climbs up the tower with Irene—Laura’s daughter—they ascend a circular staircase similar to the one in “Vertigo,” and like that immortal location, it has secrets etched in its walls. It’s also haunted by a nagging sense of history repeating itself, as Irene and Felipe become drawn to one another in a way that would appear inexplicable, had raging hormones not been a factor. In their ninth onscreen collaboration, offscreen couple Cruz and Bardem are cleverly cast as former lovers whose past has been repressed for a multitude of reasons, yet we can feel the tension simmering between them every time they’re circling each other’s orbit. The film’s title, which is perhaps stated aloud one time too many, takes on a newfound urgency as the plot thickens and the intimacy once shared between Paco and Laura threatens to upend all they have built. To what extent did the wedding guests know about the pair’s history, and can any of them truly be trusted, even the ones who are of flesh and blood relation? Just as “The Salesman” blurred the line between theatre and reality, we are continuously made to question whether characters are putting on an act. Certain wordless expressions, when recalled poignantly in hindsight, prove to speak volumes.

This is a film of towering emotion, yet rather than surging forth in cathartic outbursts, it consumes our protagonists nearly to the point of paralysis. I was reminded of Nicole Kidman’s  claim that she cried for hours when preparing for a close-up in Kubrick’s “Eyes Wide Shut.” That is how Cruz appears throughout much of Farhadi’s film, as ravaged and fiercely protective as the grieving sibling she played in “The Assassination of Gianni Versace.” Bardem has rarely been more vulnerable on film, and his portrayal of a mountainous man in mid-crumble is quietly heartbreaking. Watching him drink in sudden and distressingly sad information is akin to observing melting glaciers dissolve into the ocean. The most life-altering revelations are either whispered or materialize in the form of an untraceable text, though Paco’s wife, Bea (a fiery Bárbara Lennie), provides a welcome counterpoint to the suffocating angst. Her grounded perspective may not be an informed one, yet Farhadi portrays it without judgment, illuminating how persuasive her words are from a certain angle. The filmmaker’s reverence for Arthur Miller continues to inform his intricately layered characters, who are neither lionized nor demonized. Though there are almost too many ensemble players to keep track of upon one’s initial viewing, none exude the sort of cardboard villainy that can be easily dismissed.

Some of Farhadi’s visual ideas don’t quite pay off, such as overhead footage of the partiers that hint at what a remake of Michael Haneke’s “Caché” might be like in the era of drones. Various potential twists raised throughout the picture are much more tantalizing than what is revealed in the final act, which is somewhat obvious and not as tied into the central narrative. Yet like all of Farhadi’s work, “Everybody Knows” is less about the mystery itself than what it unearths in each of the characters’ innermost souls, opening the floodgates to a reservoir of pent-up embitterment. Laura’s husband, Alejandro (Ricardo Darín of “The Secret in Their Eyes”), remains offscreen so long that he becomes a shoo-in for the prime suspect—until he actually arrives halfway through the picture. How he has gone about rationalizing his choices in life may be flat-out exasperating in its willful naiveté, yet Darín makes us understand Alejandro’s need for closure. His happiness relies on a foundation comprised of secrets that cannot be kept indefinitely. It all leads to a climatic sequence impeccably staged by Farhadi, where key moments occur out of view thanks to meticulously timed misdirection on the order of a magician. Our mind fills in the blanks in a way that allows the most frightening events to become branded more vividly in our imagination. As the director noted during our conversation at the Toronto International Film Festival, “Everything that you see within the frame helps you to envision what exists outside of it.”

“Everybody Knows” may not be an instant classic like “A Separation,” but only a rare breed of films ever are. It is superbly acted, richly provocative and never less than enthralling. Farhadi may be criticized in Iran much like Paweł Pawlikowski is in Poland for refusing to portray his home country in a wholly positive light, yet the themes of both filmmakers’ work can translate to any culture, since their chief preoccupation is the human condition. It’s no coincidence that when Farhadi travels around the world with his movies, he finds viewers having similar reactions regardless of where they happen to live. Few filmmakers have ever been as gifted at affirming the degree to which we are more alike than we may ever have thought possible. 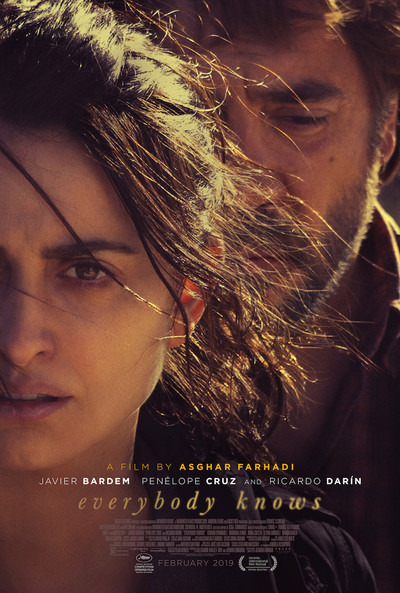