Maybe it all makes sense on the page.

Maybe in David Levithan’s Young Adult bestseller “Every Day,” the premise is better explained, the twists and turns don’t seem so outlandish, the melodramatic adolescent soliloquies resonate as they’re intended.

On the screen, though, “Every Day” has an intriguing concept that’s hampered by problematic execution. And it raises several questions it never answers in satisfying fashion, leading to a conclusion that will elicit not just head-scratching but unintentional hilarity.

But director Michael Sucsy’s film does benefit greatly from the likability of its star, Angourie Rice, who was so magnetic a few years back as Ryan Gosling’s wise-beyond-her-years daughter in “The Nice Guys.” (Rice’s naturalism, presence and even her voice are reminiscent of a young Amy Adams.) Here, she plays a much simpler type: a sweet, cute Maryland high school student named Rhiannon. She’s decent and kind—you want her to find happiness at the end of this wild romantic adventure. And she has to be the solid figure at the center as the cast of characters is constantly shifting around her, which is tougher than it looks.

Because you see, Rhiannon has fallen in love with someone—a soul, a spirit, something—that changes bodies every day. He—or is it she?—goes by the initial 'A'. A wakes up every day inside a different teenager—always around the same age, always around the same area—and spends 24 hours there, sort of existing side-by-side with that person but mainly taking over without causing too many changes. The person wakes up the next day with only hazy memories of what he or she did the previous day. And then A is on to the next one.

Why? Who knows. That’s just the way it is.

Rhiannon first meets A when A takes over the body of her boyfriend, the handsome but cocky Justin (Justice Smith). On ordinary days, Justin is definitely not deserving of someone as lovely as Rhiannon. But on this day, Justin is magical: attentive and inquisitive, doting and caring. Rhiannon falls in love all over again—and it seems she’s stirred something in A, too, to the extent that every day from then on, A seeks out Rhiannon to spend more time with her. It’s the first significant emotional connection A has ever felt, prompting A to question whether there’s a way to stop this whole body-hopping thing and settle down for good.

It sounds crazy—like a speed-dating version of “Freaky Friday.” But based on a screenplay by Jesse Andrews, who also wrote the novel and script for “Me and Earl and the Dying Girl,” it sorta works for a while. The mystery of who A will be each day, and how he/she will find Rhiannon and explain to her what’s really going on here, gives the film some forward momentum. Among the memorable suitors are a mild-mannered, heavyset kid named James (Jacob Batalon, Peter Parker’s scene-stealing best friend in last year’s “Spider-Man: Homecoming”); a trans student named Vic (Ian Alexander); a black homeschooler named George (Sean Jones) who sneaks out to meet Rhiannon at a library; and a troubled Asian girl named Kelsea (Nicole Law), who challenges A’s long-held notions about staying out of the personal lives of the people he inhabits. Beneath the narrative gimmick, there is a worthwhile, fundamental message about the importance of getting to know people for who they truly are inside, regardless of the expectations you might have about them based on their appearance, race, gender or sexual orientation. It’s a nice idea within nutty packaging.

Sucsy’s previous feature was the similarly twisty and ambitious “The Vow” from 2012, in which Rachel McAdams comes out of a coma after a car accident with no memory of her life—including the fact that she’s married to Channing Tatum, who must fight to win her back. (I think I’d remember being married to Channing Tatum, but that’s just me.) “Every Day” has a similar guilelessness about its insanely romantic premise. Either you’re going to go with it, or you’re not.

But even if you have gone with it, you may have trouble (as I did) with the off-the-rails climax. It begins with a flash-forward to what life might be like if A stayed in the body of one of Rhiannon’s final suitors, a sensitive classmate named Alexander (Owen Teague), accompanied by a tortured monologue. But the film’s ultimate, final moments, which are meant to be momentous, are more likely to result in a missing persons case. 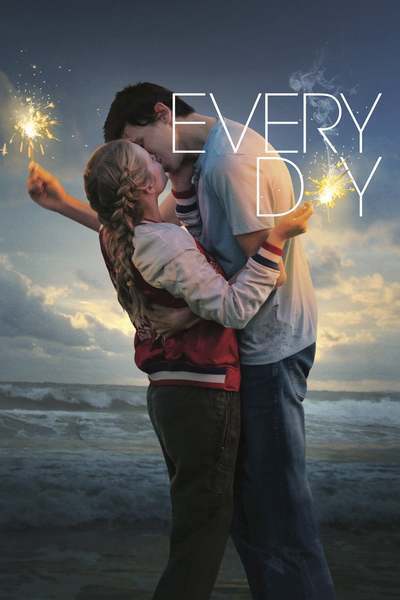 Angourie Rice as Rhiannon / A

Justice Smith as Justin / A

Jeni Ross as Amy / A

Lucas Jade Zumann as Nathan / A

Rory McDonald as David / A

Katie Douglas as Megan / A

Jacob Batalon as James / A