Writer/director Craig Roberts is still in his 20s, but his genuine talent for cinematic storytelling is evident throughout "Eternal Beauty." Already awarded a Best Actor Cymru (Welsh) BAFTA (for "Submarine"), he knows how to bring together a brilliant cast. He also has a lot of ideas, some of which are more successfully translated to the screen than others. When the narrative voice falters here, the imaginative visual themes and the complex, layered performances hold our interest.

The always-dazzling Sally Hawkins, who has played Roberts' mother twice on screen, has the lead role as Jane, a woman who struggles with schizophrenia and with the other parts of life everyone struggles with: love, family, purpose. Hawkins' performances start with her physical presence, and we learn a lot about Jane from her posture, her walk, the tilt of her head, here under a pouf of straw-like blonde hair. We first see her walking, as the camera follows her trudging through a council estate (welfare housing) toward a bus stop. Even with her oversize coat, we can see the hunch of her shoulders and almost feel her steps plod on the sidewalk.

She walks past a ringing phone. Or, more accurately, Jane hears a phone ring. It is fire-engine red, like other phones we will see in the film, including one in Jane's apartment, and one she uses in a flashback to plead with the man who left her at the altar. Does this one stop on its own or did she will it to stop? She seems to think it is the latter, as she whispers, "Thank you."

Is that call in the past a flashback, a more subjective memory, maybe both? We see Jane (her younger self played by Morfydd Clark) in a wedding gown, hanging a deep blue dress in the closet before she and her family leave for the wedding, her sisters in mini-skirted lighter blue bridesmaid's dresses. The groom is not at the church.

Back in the present, Jane meets with her doctor, who scolds her for answering "fine" when he asks how she is doing. He wants the answer to be "better." He wants her to be "in her oils" (a British expression meaning in her element, amidst what means the most to her). He wants her to be like the picture on the wall of a person at the beach, enjoying the water lapping against the sand. He decides to adjust her medication.

Follow the colors through the movie, especially strong, primary blue and red, and see how they come in and out as Jane's medication is adjusted and as she encounters with other people. Jane's clothes and furniture are mostly muted shades. On the bright red phone in her apartment, the only calls she gets are from a man who says he loves her. Like much else in the film, he may not be any more real than the spiders she says she sees in her walls. Roberts and cinematographer Kit Fraser use color and reflections (in mirrors, in glass, in a diamond ring) as a leitmotif to bing us inside Jane's shifting connection to objective reality.

In a waiting room for a doctor's appointment she meets, or re-meets Mike (David Thewlis), an aspiring musician in a red coat. He invites her to hear him perform. There is a suitably off-kilter falling-in-love (or falling in something) montage. His struggles with reality present as high spirits in contrast with what clinicians might call Jane's flat affect. He is exuberant by comparison. And impulsive.

Stories about people with mental illness too often tend to romanticize them with an "all fools but the fool" notion that neurological "normies" are less realistic than those we call crazy. The weakest part of "Eternal Beauty" is when it veers in that direction as Jane, despite her uncertain grip on reality, makes very direct, unfiltered, observations that turn out to be more astute than those of the people around her. And the flashbacks to the trauma of her abandonment by her fiancé and her awful mother uncomfortably suggest that, contrary to current medical consensus, schizophrenia is caused by external factors instead of a combination of neurological and other conditions.

Hawkins and Thewlis show sensitivity and compassion toward their damaged characters. Some of the other roles are more thinly conceived, but Penelope Wilton gives some depth to Jane's selfish mother, whose only reaction to seeing her daughter left at the altar is to shriek about her own embarrassment.

The muddled story-telling, a reflection of Jane's perception of the world, may frustrate some viewers. But those who can appreciate it as pointillist rather than linear will be able to appreciate fully Roberts' control of mood and the exceptional depth of the performances. 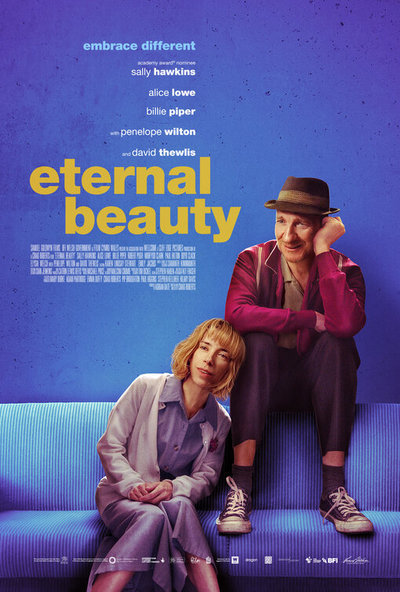