“Escape Room,” a new PG-13-rated horror film, is a sometimes diverting, but overly familiar series of set pieces in search of a good melodrama. There’s not much of a plot: six disposable protagonists try to solve a series of inter-connected puzzles, and death is the penalty for failure.

There’s also not much reason to care if these protagonists live or die, a demerit that slightly (but notably) distinguishes “Escape Room” from what appears to be its creators’ biggest influence: the go-for-broke “Saw” movie franchise, a series of “torture porn” flicks that weirdly improved as its creators grew more desperate to keep diehard fans (and only diehard fans) interested. The “Saw” movies are probably best remembered for their instantly dated gore. But, speaking for myself: I love their over-the-top soap opera plotting, especially in later sequels like “Saw VI” and “Saw: The Final Chapter” (the latter of which is not, as horror fans know, the last “Saw” sequel).

“Escape Room” has a handful of enjoyably bonkers moments, most of which involve nonsensical death traps. But “Escape Room” is also anemic compared to the “Saw” movies, as you might imagine based on the film’s comparatively weak PG-13 rating. That wouldn’t be a problem if there were other major differences between “Escape Room” and the “Saw” sequels. Sadly, “Escape Room” is only longer and more impersonal than what came before it.

“Escape Room” also feels pretty schematic since very few plots twists serve to develop the film’s cipher-like characters. Six thrill-seekers pile into the waiting room of a non-descript Chicago office building. A woman’s voice tells them to wait to be seen. They follow her instructions and exchange introductory pleasantries. But then the suite’s door handle breaks, their disembodied host’s voice disappears (surprise: she was a recording!), and a powerful convection oven-style heater turns on. The film’s deadly games begin.

If you’re like me, you probably don’t watch movies like “Escape Room” and “Saw” for their characters or performances. Still, that might be something you do while watching “Escape Room” given how threadbare the rest of the film is. Unfortunately, Nik Dodani and Jason Ellis—who respectively play clueless puzzle nerd Danny and hothead know-it-all Jason—are often loud and annoying. And Tyler Labine, in the role of the likeably clueless trucker Mike, barely does anything. Heck, even the characteristically charming Deborah Ann Woll—as the tough, capable war vet Amanda—is barely able to steal a single scene (you’ll know it when you see it).

None of this would be so bad if the two least interesting performers and characters didn’t overshadow everyone else. Logan Miller—as the twitchy (but young!) alcoholic Ben—is maybe one of the least convincing Byronic teenage protagonists in a recent horror film. And Taylor Russell’s withdrawn college student Zoey is exclusively defined by her exasperating savant-like behavior. You probably already know what’s going to happen to Ben and Zoey, but that also wouldn’t be a problem if the rest of “Escape Room” wasn’t so uninspired.

To be fair: the death trap set pieces are united by dumb-fun themes, like Tim Burton Room or Dirty Hospital Ward. But that’s about it. The oven-heated waiting room features dull clues, like an (apparently) unread copy of Ray Bradbury’s Fahrenheit 451 and a barely full water-cooler, too. And an upside-down billiards room is only noteworthy because of its annoyingly malfunctioning jukebox (it plays only one song, loudly and frequently!) and rapidly collapsing ceiling, I mean floor.

Sure, it's less fun than the "Saw" movies, but why doesn’t “Escape Room” work on its own terms? The characters all have dark secrets that ostensibly give meaning to their Sisyphean struggles. But their secrets aren’t dark enough, nor are their Rube-Goldbergian trials wild enough to be memorable. (The second-to-last puzzle room, which looks like a condemned hospital ward, is especially tedious). “Escape Room” may be a welcome oasis at the start of January’s seemingly vast pre-Oscars wasteland. But if you miss “Escape Room” while it’s in theatres, you can probably miss it altogether. 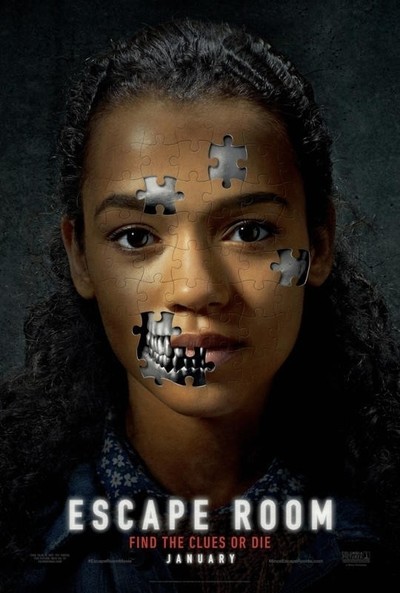