Every once in a while a movie comes along that makes me feel like a human dialysis machine. The film goes into my mind, which removes its impurities, and then it evaporates into thin air. “Erik the Viking” is a movie like that, an utterly worthless exercise in waste and wretched excess, uninformed by the slightest spark of humor, wit or coherence.

Movies like this show every sign of having gotten completely out of hand at an early stage of the production. Perhaps everybody was laughing so hard at the jokes they thought they were telling that they forgot to tell any. The movie looks obscenely expensive, but the money is spent on pointless scenes without purpose or payoff, as for example an interminable storm sequence in which the actors hold onto masts and say inane things to one another while water is splashed in their faces.

The basic comic technique in “Erik the Viking” is the use of the deliberate anacronism. There is a scene, for example, in which Vikings attack and pillage a village, and Erik the Viking (Tim Robbins) finds himself required to assault one of the townswomen. But his tastes do not run toward rape, and so they engage in a discussion on the economic realities of pillaging, and then he asks her to shout “Rape!” as a courtesy so the other Vikings will think he has done his part.

If you can master the comic logic of that scene, you have exhausted 90 percent of the comic invention in this movie, which is based on Vikings speaking as if they were 20th century satirists of themselves. The other 10 percent of the movie consists of guest appearances by such stars as Eartha Kitt and Mickey Rooney, who demonstrate convincingly that Michael Todd exhausted the possibilities of cameo appearances when he made “Around the World in 80 Days” many, many years ago. (That was the movie where the piano player turned around to grin at the camera, and you shouted, “Look! It's Frank Sinatra!” More than 30 years later, a little Viking grins at the camera, and we are expected to shout, “Look! It's Mickey Rooney!”) “Erik the Viking” was written and directed by Terry Jones, whose previous film, “Personal Services,” was a splendid and intelligent slice-of-life about a notorious London madam who ran a genteel brothel for elderly gents. The two films could not be less similar. I assume “Erik the Viking” represents some kind of comprehensive lack of judgment on Jones's part, and that he will be back among the competent in no time at all. 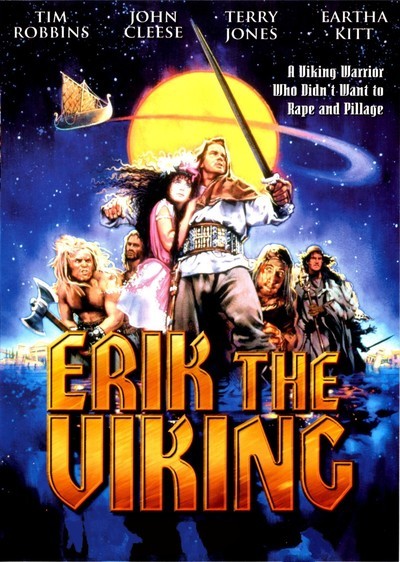 John Cleese as Halfdan The Black