Jerzy Skolimowski's "EO," about a donkey wandering through modern Poland, is a rare animal picture that's not aimed at kids. In fact, small children, particularly ones conditioned by post-1950s Disney cartoons about lovable creatures, should not be allowed anywhere near it, because the movie doesn't stint on presentations of the cruelty and brutality that animals suffer in a world of humans, and that humans inflict on each other. This is not a case like "Babe" or the recent "Okja" where hard-edged presentations of human foibles and destructive actions alternate with heartwarming depictions of goodhearted folks trying their best to protect the creatures they love and respect. There are very few people in this film who even seem to notice animals—and when they do, it sometimes leads to the worst kind of attention.

Like Robert Bresson's 1966 donkey-centric parable "Au Hasard Balthazar"— which provided the storytelling template for many other ambitious dramas such as "The Bear" and "War Horse" that focus on animals who are just animals, and don't talk or sing or otherwise attempt to entertain us—this one has the feeling of a pre-20th century fairy tale. The main goal is to create a fable that reminds the viewer of humans' connections to the natural world and serves up situations that have metaphorical dimensions beyond any physical actions that happen to be taking place at that moment.

The title character is grey with white flecks in his fur. We don't know his age or prior history. We first meet him in the opening credits sequence which, like so many parts of this film, is lit in expressionistic colors (red in this case) that verge on nightmarish or lurid. EO is in the center ring at a circus. His sweet and doting trainer Kasandra (Sandra Drzymalska) leads him through the tricks she's trained him to do. Then EO is separated from Kasandra when the circus is dismantled following a bankruptcy notice at the same time that animal rights activists are protesting the show for animal cruelty.

And the odyssey begins. There are times when the framing of the tale suggests that we're watching a shaggier version of one of those family-friendly animal pictures where a heroic creature, usually a dog, is separated from its owner and travels hundreds of miles to reunite, surviving a series of mini-adventures through sheer ingenuity. That's not where Skolimowski and his co-writer Ewa Piaskowska are taking us. This isn't even a picaresque narrative that puts EO at the center of every scene. Sometimes he's not onscreen and the movie shows us the geography of Poland and the way that humans and their buildings and roads and cars have claimed and in some cases disfigured it, while remaining largely indifferent to the natural world they've trampled and the animals they've tamed, displaced or destroyed. (A section featuring the great Isabelle Huppert could have been enlarged into its own movie; Huppert, like Marlon Brando before her, has otherworldly energy that makes it seem as if she sees more than we ever could.)

EO is small and typical—the kind of animal who seems beautiful after you get to know him, but who might not stand out in a stable full of donkeys. He could have been the model for the wisecracker in the "Shrek" movies. When Skolimowski and cinematographer Michal Dymek photograph him in tight close-ups—sometimes so tight that the squarish, old-movie frame can barely contain the graceful line of EO's head in profile, one eye looming dead-center—you get a glimmer of what could possibly be wisdom. But that's just you the viewer projecting, in the way you might while visiting a farm or zoo.

The filmmakers are resolute in keeping EO mysterious and letting him be an animal. We don't really know why he does or does not do things at any moment. Even when his trainer finds and briefly consoles him and then leaves him and he seems to go after her, there's no indication of what EO expects or hopes to achieve, much less his likelihood of success. He travels a ways and then stops, and more things happen.

But there's not always a discernible internal logic to the scenes and set pieces, and that can make parts of "EO" feel less like a coherent, if stripped-down, narrative than a highlight reel of clever cinematography techniques, including ostentatious acrobatic drone shots soaring high over the countryside, single-color filters (evocative of the final section of "2001: A Space Odyssey") and first-person "trick shots" where cameras have been attached to machines and other objects in motion. Some of these images are genuinely beautiful, eerie even. But others (including an early, brief sequence in a stable) veer towards fashion-magazine slick prettiness. And there are times when the film gets fixated on bold colors and striking angles (such as a very low-angled shot of a robot "dog" trundling through grass and across puddly dirt roads) to the detriment or neglect of EO. It's not enough to entirely derail the movie, but one might wish for a bit more aesthetic clarity from time to time.

One of the most upsetting sequences in the film finds EO chewing grass outside of a nightclub somewhere in the countryside when thugs with baseball bats pull up in cars, invade the club, beat and frighten the patrons, then barge back outside to drive away into the night. Somebody in one of the cars notices EO at the edge of the lot, and they all climb back out of the car and beat him, too, with the camera simulating EO's first-person perspective as the blows rain down on him. Why didn't EO run the second the cars pulled up and the men got out screaming with rage? This and other moments make it feel as if the potential for dramatic power overruled practical or logical considerations.

But such lapses are rare. For the most part, you feel as if you're in sure hands and can see what the storytellers are trying to do. It's as much an anthropological pseudo-documentary as it is a drama, one that sometimes evokes the Terrence Malick philosophy of "The Thin Red Line," which began by insisting that humans are a part of nature and that when humans war with other humans, it is nature warring with itself.

This is not the kind of movie that tries to convince viewers that animals are "just like us," even though quite a few scenes depict humans confirming that they, too, are animals, by intimidating and terrorizing individuals and groups in order to assert dominance or claim territory. At least EO escaped the circus. Humans built it and are the main attractions as well as the audience, and don't realize that they're running through the same routines, day after day. 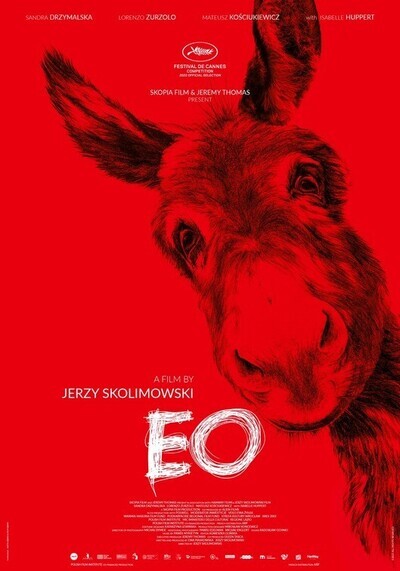 Isabelle Huppert as The Countess