Sonia Kennebeck’s “Enemies of the State” spirals and swirls in a way that’s meant to enhance the “isn’t this crazy” aspect of its true story, but its filmmaking tricks have become cliched in the era of True Crime obsession. In the end, what’s true and what’s not about the case of Matt DeHart gets hazier with each subsequent revelation in this too-often cluttered film, one that leans into conspiracy theories in order to make itself more entertaining. Instead of peeling back layers of this interesting story, Kennebeck weighs it down with overheated filmmaking, soundbites that sound scripted, and a lack of true confidence in the story that’s being told. Was Matt DeHart a pedophile or a hacker who stumbled onto government secrets so intense that they framed him in order to keep him quiet? What if both could be true?

In 2009, Matt DeHart was arrested for possessing child pornography, but he almost immediately accused the government of framing him for his involvement with WikiLeaks and the hacker group known as Anonymous. With his parents Paul and Leann serving as essentially his spokespeople, a narrative was built that placed DeHart in the same breath as someone like Julian Assange or Edward Snowden. He discovered the truth about something the government couldn’t allow out and so they trumped up charges, threw him in jail, and even tortured him.

Kennebeck does uncover some remarkable documents that support DeHart's allegations against the government, including a fascinating document in which he signed away “Consent to Assume Online Identity,” giving agents not only access to his web data but tacit approval to pretend to be him. At this point in the film, it’s presumed this incredible document that I didn't know was even possible is to entrap more couriers in the Wikileaks universe, but couldn’t it just as easily have been to entrap those involved in the child pornography that DeHart was accused of possessing? “Enemies of the State” regularly plays in this gray area where we’re meant to be uncertain about not only Matt DeHart’s guilt but how much his parents played a role in crafting his narrative. They worked overtime to build the narrative that people were watching all three of the DeHarts, and continue to do so.

They also undeniably tried to help him escape justice, first getting Matt to a Russian embassy, where he may have at least attempted to trade state secrets, and then to Canada, where his public persona as a prosecuted hero of the Snowden era was really built. Imagine if none of it is true and then consider the victims of DeHart watching his face be put on t-shirts. It’s stomach-churning. And there’s a fascinating story to be told about someone who very likely was a predator finding a way through the internet era to turn himself into an icon.

However, “Enemies of the State” isn’t quite that movie. Kennebeck never finds the right throughline and chooses a structure of exaggerated revelations over insight. A better film would have put it all on the table early and then asked viewers to unpack not only what they think about DeHart but what his story says about our government and internet culture. She gets there, but it’s after a trudging collection of overheated soundbites like “Secrets and shadows were everywhere in this story.” A very little bit of that goes a long way, and a lot of the set-ups in "Enemies of the State" feel as forced as that quip. For example, when Matt's mom pulled a Guy Fawkes mask out of her son's bureau, I felt like I was being used, and I wasn't sure if it was by mom or the filmmaker. (Or both.) And there are a few too many recreations here for my taste. While it’s smart of Kennebeck to use the real audio, a few of them start to feel exploitative, especially in the final act when an incriminating phone call is unearthed. Why use an actress there? Feels a little ghoulish.

What is the true story of Matt DeHart? Only he will ever fully know. He undeniably tried to alter the narrative after getting on the radar of the authorities, but did he do so because he was hiding his evil nature or running from a government who was trying to silence him? And how would we know the difference? It’s a fascinating story. I only wish I felt like “Enemies of the State” knew how to tell it. 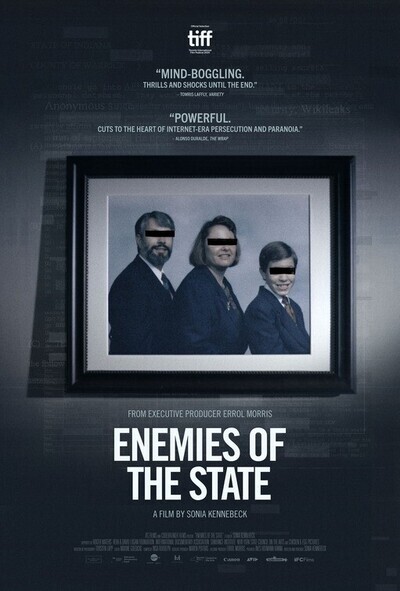