John Hawkes has a face you can never forget, but such skill that each time you see him you think, "This is the kind of role that brings out the best in him." In films and TV series spanning decades, he's played a terrifying cult leader, a humble Old West hardware store owner, a mountain climber, a bitter paraplegic, good and bad and adequate fathers, and a side gallery of cops and crooks. "End of Sentence," a road trip film that starts in Alabama and ends in Ireland, is another performance to place in Hawkes' "All Time Best" file, a drawer so stuffed by this point that you can barely get the damned thing closed. He's so effective as a soft-spoken pacifist in this modest indie drama—consistently showing you sides of his talent you haven't seen before, even if you're a Hawkes completist—that the fact that his costars and the movie that surrounds him are good feels like a welcome but unnecessary bonus: an extra 50 bucks to complement the sack of gold you're already holding.

Written by Michael Armbruster ("Beautiful Boy") and directed by first-time feature filmmaker Elfar Adalsteins, "End of Sentence" starts out like a typical "guy gets out of prison and tries to readjust" movie. Hawkes' Frank Fogle brings his wife Anna (Andrea Irvine), who's in the late stages of cancer, to visit their car thief son Sean (Logan Lerman) in prison near the end of his term. The purpose is to say goodbye. She dies soon after, and six months after that final visit, Frank shows up at the prison with a car and a duffle bag full of clothes. He asks his son to come with him to Ireland to scatter his mother's ashes on a particular mountain lake: her final request.

Turns out Sean doesn't want to go because he despises his father for reasons we'll learn in due course. He says he has a job waiting for him in California, and that if he doesn't show up a few days from now, first thing on a Monday morning, they'll give it to someone else. They compromise (with the help of a little guilt-tripping) and agree that they'll try to get the job done as fast as possible so that Sean can make his appointment.

Of course things don't go as planned. As the detours, twists, and happy accidents accumulate, father and son are forced to come to terms with the reasons for their estrangement. At the core is Sean's perception that his father is a meek, weak man who failed to prevent his grandfather, Frank's dad, from treating him cruelly. The relationship between these two men, one impulsive and swaggering, the other soft-spoken and allergic to violence, suggests a unmade sequel to the classic "Rebel Without a Cause," with the James Dean character going to jail for car theft, getting out many years later to find that his mother had died and he has to lean on the emotionally emasculated father that he loathed when he was young and free.

And it's here that you might want to check out if you haven't already read reviews of "End of Sentence" that give the entire story away.

It's not that this is a particularly surprising movie in totality: you can tell early from the tone of the script, direction, and performances that this is a nice movie that's going to pluck the heartstrings, but there's no chance that it'll grab the whole instrument and dash it against the pavement, as a director like John Cassavetes or Mike Leigh might have done with a similar premise. This is a "healing journey” that tacitly guarantees a happy, or at least hopeful, ending, and you can feel the movie preparing to hit expected beats that always arrive on time, regardless of whether you can forecast the details.

No, what's special here are the moment-to-moment choices of the actors and filmmakers, which confirm that this movie was made by artists who understand what drives people, and are incapable of hating them, or encouraging others to hate them, if it's clear that their worst mistakes are a result of conditioning and trauma that they don't have the tools to understand. "End of Sentence" (a fiction-workshoppy title that undersells the film's richness; these men are prisoners of their conditioning, you see) is at its best when it places its main characters—and supporting characters, including a beautiful young drifter named Jewel (Sarah Bolger), who has a hard-luck story and a heavenly voice—in a situation, and then watches them behave.

Adalsteins has a gift for building a scene and letting it unfold at a natural pace, holding on a lovely but unfussy shot until he has a good reason to cut to something else, and often following the characters as they move through crowds of strangers, letting ambient noise and music drown out dialogue so that they become something like silent film characters, or animals in a nature documentary, prowling, preening, or nesting in terrain they know well, or not at all. There's a marvelous scene where we watch Jewel and Sean check each other out from opposite sides of a noisy bar, a perfect rendition of cool people flirting while maintaining enough plausible deniability that they can opt out without embarrassment. There's a similar but even better scene later, with Frank, Sean and Jewel (who of course joins them on their trip) drinking in a pub where musicians hear Jewel singing along and convince her to step up to the front.

The smaller, more intimate moments are just as smartly judged, and often wrenching in their quiet presentation of how trauma warps the brain, and keeps it mangled long after the source of the trauma is gone. And it's here that Hawkes' value becomes clear. Bolger and Lerman get to play sexy and passionate and "big," invoking the destructive privileges of youth, which is fun and liberating. But Hawkes is the anchor of the story. He has to hold the  movie together while playing a quiet man who avoids conflict, has a seemingly bottomless capacity to withstand verbal abuse and disappointment, and just generally radiates love for his fellow human beings, even the ones he hasn't met yet, and the ones who straight-up tell him that they'd like to kick his ass. Making a nice person exciting might be a lead actor's toughest job.

Hawkes nails it by letting you feel what Frank is feeling even when he's trying to hide it (often successfully) from others. A rewarding sub-thread in the script concerns Frank's gradually uncovering his wife's secret other life. These included regular trips to Ireland, possibly to see a man she loved when she was young. It's no fun to learn that you might have been chosen as the safe alternative to a great, dangerous love; chances are good that anyone reading this has been one or the other, possibly both.

But regardless of whether Frank's dark fears that he was Anna's backup plan turn out to have been justified, it's satisfying to watch Hawkes play minute variations of surprise, betrayal and curiosity, and then—perhaps the movie's unifying theme—how to live with disappointment.

Frank isn't the father he should have been. Sean wasn't the son he should have been. Jewel isn't the beacon of salvation that Sean and Frank both want her to be. But they all have solid reasons for not being that thing, or momentarily pretending that they are that thing. You don't always approve of them, but you understand them. That's such a rare approach to storytelling that when you come across an example as solid as this, it's like taking a deep breath of spring air after spending too long inside. 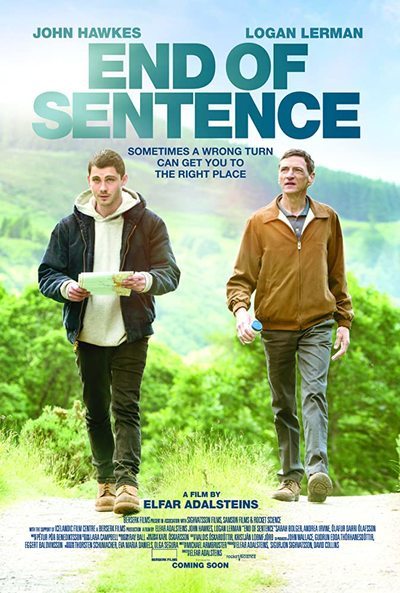