It’s tempting to say that now’s not the time for the toothless Civil War drama “Emperor,” but there’s probably never a good time for a feel-good atrocity narrative, not even one about Shields Green, a slave who, in real life, joined John Brown’s abolitionist army and fought in the historic raid on Harper’s Ferry. The problem with “Emperor” is not that it’s an optimistic war movie, one that applauds some allies, like Brown, while damning opportunistic collaborators who tried to turn a profit and/or secure their own freedom by informing on escaped slaves. “Emperor” would still be insulting even if it came out during sunnier times, from its inert, pandering dialogue scenes—any scene featuring Frederick Douglass is deadly—to its tacky action and chase scenes (and there are a couple). “Emperor” is lousy in the same way that many other mediocre slave narratives are: it re-presents a dark period in American history without being inspired or insightful enough to be worth your curiosity or emotional investment.

A non-narrativized book or essay about Green (Dayo Okeniyi) might have conveyed something meaningful about his journey from unofficial plantation manager to musket-packing abolitionist. Such a book or article would presumably fast-forward through several of this movie’s more perfunctory scenes, which only serve to remind viewers of how immature (at best) and vile (in general) white Americans can be. Green puts up with all kinds of cartoonishly self-interested white people, including blithely unconcerned plantation owner Randolph Stevens (M.C. Gainey) and his proud, sadistic overseer Hank Beaumont (Patrick Roper). And don’t get me started on Duvane Henderson (Paul Scheer), the derelict former owner of Stevens’s plantation, and a minor character who is as pathetic as Scheer’s horrendous combover wig.

I mean, “Emperor” is set in Charleston, South Carolina during 1859, so one shouldn’t expect to encounter sympathetic white characters. But there’s also not much to producer/co-writer/director Mark Amin’s depiction of the many abuses that Shields endured because of Stevens and/or Beaumont. According to “Emperor,” Green was reflexively cursed at, sold out, and physically tortured to the point where he logically chose to hook up with Brown (James Cromwell), which in turn led to Green’s participation in the raid at Harper’s Ferry. Still, Amin dwells a little too much on Stevens and Beaumont, like when Roper stares goggle-eyed at Tommy (Trayce Malachi), Green’s young son, as the boy quietly reads a book of English grammar. We presumably need to see Beaumont get mad at Green’s son, because that’s what inspired Green to kill Beaumont, and then run for his life to Greensboro. But Beaumont’s scenes are played out since they’re simultaneously too timid to be provocative, and too flat-footed to be compelling.

The same is true about pretty much any scene featuring Luke McCabe (Ben Robson), the flamboyant, amoral bounty hunter that Stevens hires to catch Green. McCabe seems to hail from a more light-hearted action-adventure about slavery. You can see flashes of that other movie throughout “Emperor,” but they’re enough to make you question the priorities of Amin and his collaborators, particularly co-writer Pat Charles and executive producer Reginald Hudlin. Like, maybe you don’t need a scene in your slave movie where McCabe, rocking a goofy chevron 'tache, a pompous wide-brimmed hat, and some very carefully teased curly locks, tries to discover the Underground Railroad’s location by interrogating a slave who’s about to be lynched. Or if you do need that scene, maybe you can find ways to get through it without having a soon-to-be-dead slave cry out: “I don't know nothin' 'bout no railroad, suh.” In any case, this scene, as it plays out on screen, is unfortunate.

“Emperor” rambles along without much dramatic consequences or symbolic payoff. Some scenes nudge viewers in the ribs with a few name-drops and a lot of amateurish, Civil War cosplay-style dialogue, like when Frederick Douglass (Harry Lennix) is introduced: “That’s right, son—that’s Frederick Douglass.” Or when Green explains why he needs to fight alongside Brown, who’s presented as a cuddly, progressive father figure (“Wait, I know who you is—you're John Brown!”): “We can't all fight this war with a pen, Mr. Douglass. Some of us are best equipped to fight this war with a gun.” I understand and appreciate the good intentions that went into the making of “Emperor,” especially given the apparent sincerity of some slogan-like dialogue. Like when Tommy asks his dad if it’s “really true” that he’s a prince, and Green replies that “it’s true to me.” Or when Bruce Dern shows up (and in another terrible wig) and tells Tommy that his father “wanted you to have what meant the most to him.” Unfortunately, all I saw on-screen was a lot of straining, and not much significance. 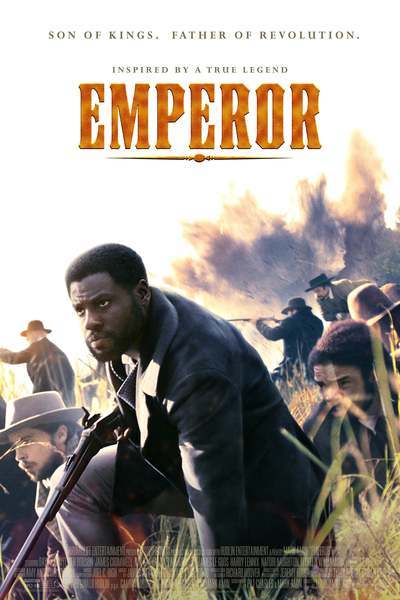 Rated PG-13 for violence throughout, language including racial epithets, and some disturbing images.