The most requested image in the U.S. government's National Archive is a photo of President Richard Nixon with the increasingly isolated rock star Elvis Presley, who visited the Oval Office on December 21, 1970 to ask to be made a Drug Enforcement Agent. Nobody but Elvis and Nixon were privy to the details of what the two men talked about behind closed doors, which of course makes their meeting a rich subject for comedy and drama. "Elvis & Nixon" treats it as a chance to think about loneliness, the way that the media-constructed image tends to swallow up famous people's actual personalities, and how accomplished men express their fears when they wield whatever power they've accumulated.

Unfortunately, the result is only fitfully entertaining or illuminating. The actual meeting of Elvis and Nixon takes up a very small part of the movie's running time. The bulk of the story follows Elvis (Michael Shannon) as he tries to get into the White House unannounced and Nixon (Kevin Spacey) as he waves off advisers who try to convince him that meeting with the King of Rock 'n' Roll would help him with the "youth vote." None of the supporting characters (in Elvis' entourage and on Nixon's staff) are as compelling as the title characters, and the film's attempts to flesh them out prove frustrating because who cares, really, about the girlfriend problems of Elvis' best friend, or the interoffice politics of the West Wing when you could be watching American history's most venal, insecure and paranoid president commiserate with a musical superstar who shares his fear that the country is on a slide-trough to Hell?

We get a bit of insight into Elvis' feelings of alienation and despair, but there's not enough of it to make this film's Elvis seem like more than an underdeveloped vehicle for social satire and bleak psychological comedy. By the 1970s, Elvis' movie career was dead, his country-gospel recordings hadn't caught on with younger fans who were enamored with the Beatles and the Stones and Jimi Hendrix and other psychedelically-flavored rockers, and he'd failed to capitalize on the success of his "Elvis '68" TV special, which a lot of people thought would signal a powerful new phase in his career. The Elvis we meet here carries himself like a defeated man. He plays casino shows for die-hard fans and frets that he's become a cartoon version of himself. One of the more effective scenes finds the King standing in front of a mirror, telling his best friend Jerry Schilling (Alex Pettyfer) that Elvis and "Elvis" bear little relation to each other anymore, and he no longer feels connected to his roots as a poor Memphis redneck. Not even his old buddies can assuage his feelings of estrangement; they love him, in their way, but there's no denying that they also love being able to say they're friends with Elvis, that they live in his house and help themselves to his groupies, that he's bought them clothes and cars.

Michael Shannon does a better job of filling in all these details than the film does. A master of stylized suggestions, he's one of the greatest living American actors, a performer who comes at every character from a series of unexpected angles. Watch the way he inclines his head, the way he punctuates his statements with finger-snaps and karate moves and hand-waves that suggest a priestly blessing (or a Jedi master trying to halt an enemy in his tracks). He pitches his voice higher than a typical impersonator would, a choice that makes you think of Elvis as an overgrown Little Boy Lost. There are moments when Elvis seems to be giving a performance as Elvis, the costumed musical superhero, because the real guy was subsumed by him many years ago. Shannon doesn't really look like the real Elvis, but it doesn't matter. Like Anthony Hopkins in "Nixon" and Denzel Washington in "Malcolm X," he's not doing an impression. He's performing an idea of a real person, with such warmth and intelligence that you feel as though you understand Elvis more completely.

Nevertheless, I suspect the character won't fascinate anyone who isn't already an Elvis buff, because the movie's script (credited to three people) and direction (by Liza Johnson) treats the buildup to Elvis's White House visit as a series of sketch comedy-like moments that err on the side of cute and wacky. This is partly a pacing and structure issue, but it also comes from an evident failure of nerve. The film is by its nature a drawn-out, deadpan comedy, and in its quieter moments it absolutely nails that vibe, but the toodle-oodle faux-blues score (by Ed Shearmur) keeps chiming in, sometimes blaring in your ear, reassuring you that everyone onscreen is lovable and the whole story is just adorable as all get-out.

Kevin Spacey cedes the film to Shannon, which is for the best when you compare his performance and his costar's. Spacey is an Orson Welles-Laurence Olivier kind of actor, wickedly funny and big by default. He does an accurate, amusing Nixon impersonation (Spacey is one of the best impressionists alive, in fact—and a great talk show guest for that reason) but he's given even less to work with here than Shannon. This movie's version of Nixon is an impatient, surly, out-of-touch boss who just happens to be Richard Nixon and share Richard Nixon's political values.

It's only in the handful of moments when Nixon and Elvis face each other in private that we get that electric crackle of big personalities clashing. When the characters jockey to control a particular moment, the film momentarily becomes as incisive and startling as you want it to be, as when Elvis helps himself to a bowl of M&M's that he's been warned are only for Nixon, or when Elvis tells the president that the letter he scrawled in a child's handwriting and delivered to the president was written on a plane from Los Angeles. "I can tell," Nixon deadpans.

This story was told with more flair in the 1997 Showtime TV movie "Elvis Meets Nixon," directed by Allan Arkush of "Rock 'n' Roll High School" fame, and it's probably to the filmmakers' benefit that Arkush's movie is so difficult to see these days. It had an exuberant goofy quality, bordering on "Doonesbury"-style political satire, that's ultimately more compelling than this movie's shambling, pokey attempts to caricature and humanize Nixon and Elvis at the same time.

The movie is worth seeing, though, for Shannon's performance, in particular a monologue about the singer's twin brother, who arrived in the world stillborn 45 seconds before Elvis. It's hard to describe the power of this scene without seeming as if I'm overselling it, but when you see it you'll know why I mentioned it. It's everything "Elvis & Nixon" could have been but for some reason chose not to be. It shows us the real man beneath the suits and flared trousers and garish belt buckles and rings—the boy who was blessed to be given the luck of two brothers, but would rather have just had a brother. 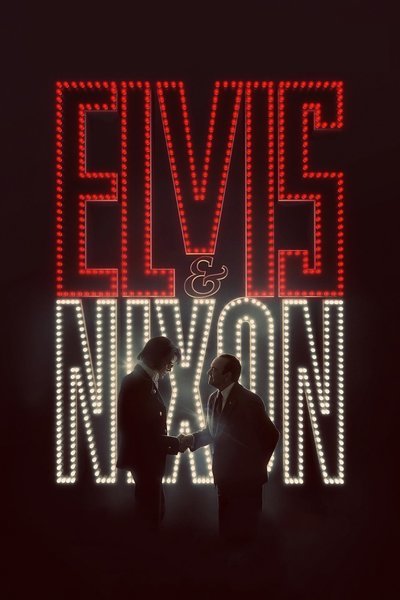