Last year in Mike Leigh’s rather difficult biopic “Mr. Turner,” the nineteenth century art critic John Ruskin was portrayed by Joshua McGuire as an inane little ninny of a man, a self-satisfied bird pecking away at Timothy Spall’s grunting painter J.M.W. Turner. And now Ruskin is being raked over the coals again in a very different and far more elaborate way in “Effie Gray,” a handsomely designed period film with a screenplay by Emma Thompson that seeks to dramatize Ruskin’s unhappy marriage to a younger woman as a kind of feminist fairy tale.

As Ruskin, Thompson’s real-life husband Greg Wise looks exactly like surviving photographs of the man he is playing: handsome, gloomy, lofty, and a little blank and bland. His handsome blandness is a trap with which he captures the innocent Effie (Dakota Fanning), whisking her away from her parents in Scotland and depositing her into his family home in London, where he is controlled by his tyrannical father (David Suchet) and mother (Julie Walters), who insists on giving her grown son a bath after his long voyage. This movie is too tasteful to actually show you Mrs. Ruskin bathing her adult son and what that might look and feel like, and so we are left wondering, with Effie, just what is wrong with her marriage from the start.

On their first night together in the house, Effie comes into their bedroom and expectantly takes off her nightgown. Wise makes it clear that Ruskin has never seen a nude female body before in the flesh, and he also makes it clear that Ruskin is repelled by what he sees, and also fearful. After that key disconnection, “Effie Gray” shows us scene after scene of Ruskin coldly rejecting his wife in every way possible until she grows ill with neglect, losing her hair and retreating into closed-off misery. Fanning plays the part of Effie on a single stunned note of frozen longing, and this is not enough to sustain all of these repetitive rejection scenes. The wise and sympathetic Lady Eastlake (Emma Thompson) notices Effie’s plight, as does the ambitious young painter Everett Millais (Tom Sturridge), who owes his success to Ruskin’s championing of his paintings, but there is little they can do about it at first.

This should be a dramatic situation, like a variation on Hitchcock’s “Rebecca” (1940). The unconsummated marriage between Ruskin and Gray has served as material for many prior books and plays, but the material here never coheres because Thompson is so intent on making Effie a sympathetic heroine that she makes Ruskin into such a villain that he might as well be twirling his mustache toward the end. Why did Ruskin reject his wife and refuse to sleep with her? Was he too much of a puritan for intercourse? Had his parents stifled him to the point of total sexual repression? Was he gay? Or was he a never-active pedophile who could not be attracted to a mature female? This last option looks like it is the most likely, from a modern perspective.

Gray herself wrote, “He alleged various reasons, hatred of children, religious motives, a desire to preserve my beauty, and finally this last year he told me his true reason…that he had imagined women were quite different to what he saw I was, and that the reason he did not make me his Wife was because he was disgusted with my person the first evening 10th April [1848].” Ruskin later wrote, “It may be thought strange that I could abstain from a woman who to most people was so attractive. But though her face was beautiful, her person was not formed to excite passion. On the contrary, there were certain circumstances in her person which completely checked it.”

Instead of exploring this as openly as possible and taking some chances, Thompson and director Richard Laxton only hint at what’s wrong between them, and so Wise is forced to be ever more opaque while Fanning is presented as a Sleeping Beauty only. There are colorful detours here, like a trip to Venice that is presided over by the always-welcome Claudia Cardinale, but such excursions only serve to blur an already blurry situation. To put it in crude terms, “Effie Gray” is a film about a young woman who very righteously wants to get laid who finds that her only out after a long ordeal is the fact that her husband has not taken her virginity, and there is definitely an irony in that. If Ruskin had tried a bit sexually with her and failed, she might have been stuck with him for life. It was only the fact that he was such a screwed-up prude that finally offered her a possible escape hatch.

This might qualify as a spoiler if you aren’t familiar with the case, so tread softly here. “Effie Gray” runs 108 minutes, yet it feels like it ends right before the real drama is about to begin. Why on earth have Thompson and Laxton chosen to show us the very long and drawn-out unhappiness of the Ruskin-Gray marriage and his un-giving cruelty toward her if we don’t get to see his comeuppance and public humiliation after she charges him with impotence to win her divorce? Surely we have earned a few scenes of his reaction to this scandal in social situations, and surely it would be good to know just what happens to Effie (she married Millais and bore him eight children). Whatever his personal drawbacks, and they seem to have been very extensive, Ruskin was an incisive art critic and he is still very much worth reading. If the lambasting he gets in “Mr. Turner” and in “Effie Gray” leads a few people to read his work then that might be the keenest irony of all in this odd open season of Ruskin-bashing. 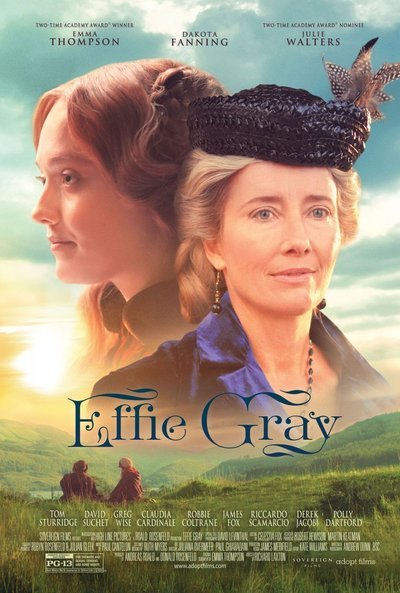 Rated PG-13 for thematic and sexual content, and some nudity