“Dreamland” tells a story we've heard many times before, blatantly displaying its influence for all to see but never quite pulling them together into a fully satisfying whole. And yet, it nearly works due to the presence of Margot Robbie in the central role. This news may not come as a surprise—from her first major film role in “The Wolf of Wall Street,” she has been an enormously exciting screen presence who has proven herself to be equally adept with both comedic and serious material in films ranging from “I, Tonya,” “Mary Queen of Scots,” “Once Upon a Time ... in Hollywood” and “Birds of Prey.” While it's unlikely that this film will take up too much time in any future Lifetime Achievement Award clip reels, "Dreamland" is a testament to the importance of sheer star power to help carry even haphazard material along, at least up to a point.

Set in 1935 in a small Texas town hit equally hard by the Great Depression, dust storms, and drought, Eugene (Finn Cole) is a young man living on a dying farm with his mother (Kerry Condon), adorable younger half-sister Phoebe (Darby Camp) and hard-ass stepfather (and police deputy) George (Travis Fimmel)—his biological father (Hans Christopher) fled years earlier with the only subsequent contact being a single postcard sent from Mexico. The only real excitement in his life comes in the form of the stories found in the pulp detective magazines. Things change one night when Eugene goes to the all-but-abandoned barn out back and discovers that serial bank robber Allison Wells (Robbie), who has been on the run following a botched heist that led to the deaths of five people, is hiding there with a bullet in her leg.

He tends to her wound and listens to her side of the story—sure, she robbed the banks but it was in protest of the same banks that took away her own family’s home and she insists that she did not kill anyone. Eugene sympathizes with her plight—of course, the fact that she looks like she just stepped out of one of his lurid stories helps a little—and he begins trying to do what he can to help her out, ranging from sneaking her food and a dress to slipping into the police station to steal evidence implicating her. What she really wants is for him to get her a car so that she can flee to Mexico. When the time comes, he winds up going with her, fueled with dreams of a more exciting life with the woman he has fallen for—although she makes it clear that her feelings towards him are not romantic in the slightest, at least at first, she is not above using them to her advantage when the situation arises.

Right from the start, it's obvious that screenwriter Nicolaas Zwart and director Miles Joris-Peyrafitte’s are positioning their film as a tribute to the early works of filmmaker Terrence Malick, especially “Days of Heaven,” which shares with it such elements as a Depression-era setting, lovers on the run following a crime (which Malick also utilized in “Badlands”), narration from the main character’s younger sister (voiced by Lola Kirke) and plenty of scenes clearly shot during the so-called “golden hour” to lend a sense a grandeur to the otherwise bleak surroundings. However, there is a fine line between “homage” and “uninspired imitation,” and this film constantly finds itself tripping over it. While Malick was able to transform those elements into sheer cinematic poetry, here they feel more like clunky affectations that fail to distract from the material's increasingly cliched nature.

There are a number of other flaws as well. The film’s key relationship between Allison and Eugene never quite works because while the former is enough of a live-wire to keep things lively whenever she is around, Eugene is frankly a bit of a bore, making the later scenes in which it appears that Allison is developing genuine feelings for him seem extremely unlikely. This is especially evident during what is easily the film’s most bizarre sequence, an extended shower scene that seems like a refugee from a Skinemax extravaganza that goes on for so long that it feels like an entirely different kind of golden hour. Not only is the scene longer than most showers, it comes so late in the proceedings that it grinds the story’s momentum to a near-halt at precisely the moment when it should be building to its inevitably over-the-top climax.

And yet, while “Dreamland” constantly struggles to rise above the level of the aggressively mediocre, Robbie (who also served as one of the co-producers) is doing everything she can to keep up interest, and she does a lot more in this regard than most other actors might have been able to muster in her position. Even though the trajectory of the film and her character are never really in doubt, she brings enough of an individual stamp to the material to make it seem a little less cut-and-dried than it actually is. If nothing else, “Dreamland” affirms Robbie’s abilities both as an actress and as a movie star of the highest order. Of course, the same thing could be said for nearly all of her movies and in many cases, they also happen to be better films as well.

Playing in select theaters on November 13; available on digital platforms and premium on demand on November 17 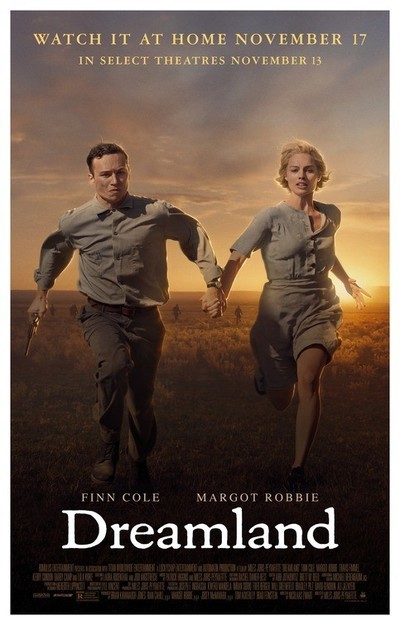