Bruce McDonald’s “Dreamland” is a half-remembered nightmare. It’s full of incomprehensible flashes of striking imagery, most of which won’t make sense in the morning. But in the moment you’re watching “Dreamland,” you’ll feel the restlessness of its messy story, the fitful starts-and-stops of its erratic editing and the leaden quality of its action sequences, which has all the grace of someone who took a Benadryl pill too early. McDonald’s film mines features from the “John Wick” series and some passing resemblances to “Leon the Professional” and “You Were Never Really Here,” but leaves behind any of the brilliance that made these movies memorable.

Stephen McHattie plays the dual roles of Johnny, a hitman with some kind of a nebulous moral code, and drug-addicted trumpet player known only as The Maestro. You can tell them apart because one wears a dreadful shaggy wig and carries a gun, and the other will slick back his hair and always look ready for an impromptu jam session for some reason. Fate crosses their paths when a shady criminal boss named Hercules (Henry Rollins) puts a hit on the jazz player’s pinky finger because he says, and I quote, “I’m crazy,” and is still fuming after the musician hurt his pride. That’s not all on Johnny’s plate. His noble streak then forces him to save a pair of kids caught up in Hercules’ new business venture into child trafficking, and that’s before the brother-sister team of vampires (Juliette Lewis and Tómas Lemarquis) arrives for an even more nonsensical twist.

Trying to find a silver lining in “Dreamland” is like a fishing expedition in a dried-up riverbed. Maybe you’ll stumble upon some sign of life, but I came home empty-handed. Poor McHattie’s characters look more tired than world-weary. His killer with a heart of gold is no more interesting than his bad wig, and his dope fiend musician schtick is as tired as he looks. For a moment, he takes on the “Leon the Professional” and “You Were Never Really Here” mantle of saving kids from a terrible fate but never manages to do much with it. It’s one of many ideas introduced into the film and quickly dropped like a hot pan, like the pack of roaming boys cosplaying as Damien from “The Omen” that Hercules sends out to fetch the kids and are never seen again.

If there’s something to be said about the unenviable task of playing two distinct characters in the same scene, it’s that those moments in “Dreamland” are among its clunkiest and ill-fitted. Reactions feel delayed, and the actor never really seems to be interacting with another person at the moment. It’s almost awkward enough to distract you from the terrible dialogue or the movie’s stilted action sequences. There’s one action scene early on where the camera is at a distance, but framing the actors from only their arms and up, missing most of the action in the process and looking more like a photograph your uncle took that’s full of more ceiling than people. Duff Smith’s editing often lingers too long in each cut so that any momentum a fight scene might pick up feels too delayed. And cinematographer Richard Van Oosterhout appears to have cribbed many of the neon-soaked lighting cues from movies like “John Wick” for McDonald’s vision of the criminal underworld, which also features attractive women assistants in winged-tipped eyeliner and knock-off chic military jackets.

I hoped the late addition of vampires would liven up the mix, but there’s not nearly enough Lewis-as-kooky-diva-wedding-coordinator to offset the plodding lead-up to her ostentatious party. Her campy vampire brother (Lemarquis) acts like he’s in an entirely different movie, hamming it up for the camera by hungrily licking his lips and widening his eyes for the full Nosferatu look. It’s almost unfair to put him in the same room as the anemic Johnny, who makes the undead look more alive than the living. The wedding itself is its own kind of parody, seeing as it somehow includes a man in a Nazi uniform with his attack dog seated near a Black man in an African-themed military uniform and a woman in a burqa, and ends with a laughably distanced jazz performance during a shoot-out. It doesn’t feel cool, although it seems intended to play as such.

McDonald wishes that these layers of insanity can make up for his lack of skill, but it doesn’t. There’s scant entertainment value in “Dreamland,” but what you’ll find instead is some queasy throwaway lines that suggest Hercules named his club after Al Qaeda and an exploitative subplot about sex and human trafficking. Not bad enough to even have a good laugh, “Dreamland” exists on a plane of exhaustion, one that’s too tired to be much of anything. 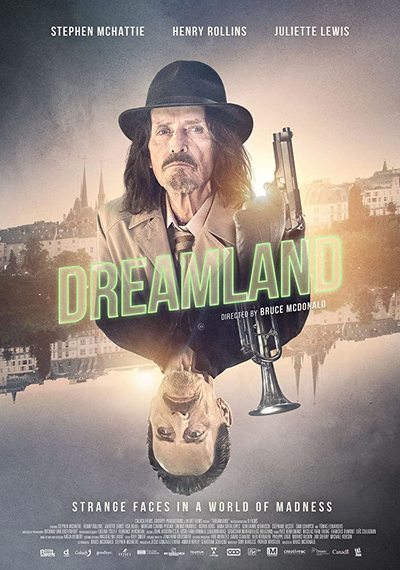