First, some good news: "Dracula Untold," a sort of "Batman Begins" prequel, isn't as tacky as it sounds. There are glimmers of a brooding and icky horror epic scattered throughout the film, particularly in its surprisingly romantic, matte-painting-esque backdrops and impressionistic vampire's-point-of-view shots. But that leads me to the bad news: if you step away from "Dracula Untold" long enough to describe it, you'll realize how soul-crushingly unimaginative it is. This is, after all, a "Maleficent"-style anti-fable that relies on your instant recognition of Dracula while trying to rehabilitate and recast Bram Stoker's bloodsucker as a Byronic hero. Still, the good news barely outweighs the bad in "Dracula Untold," a lightweight war-adventure that is ultimately stranger and more enticing when it remembers it's also a horror film.

In the beginning, a boring narrator natters on about how Vlad "Dracula" Tepes (Luke Evans) was a former Transylvanian child soldier who was abducted by Turks, trained to fight, blah blah blah...he's a killing machine. Then, we actually meet the guy: a soldier kneeling in prayer before a forest of pikes bearing his impaled foes. It's a creepy image, and one that should be held for at least twice as long as it is. Unfortunately, the makers of "Dracula Untold" typically hit the fast-forward button, and rush to the next chain of events. Vlad is given an ultimatum from Turkish Sultan Mehmed (Dominic Cooper) while feasting with angelic wife Mirena (Sarah Gadon), she of the blue eyes, and generous cleavage: give Mehmed 1000 Transylvanian child soldiers, or take on Mehmed's overwhelming forces.

Herein enters the homo-eroticism that the film sometimes cannot suppress: Vlad and Mehmed are childhood rivals, trained together in the army of Mehmed's father. But Mehmed's threat is a visceral reminder of events that are only alluded to in the aforementioned voiceover-reliant introduction. Vlad strikes a deal with a vampire (Charles Dance) that offers him an alternative deal: stay human and die, or temporarily become a vampire and destroy Mehmed's army. This would be a simple choice were it not for a ridiculous convolution: if Vlad drinks human blood, he will permanently become a vampire, and wind up sucking forever. Yes, that was a pun, and no, you don't get an apology.

Nor should you expect one in a review of "Dracula Untold," a bizarrely ambitious popcorn cash-in that's also half-baked in all the expected ways. The film's battle scenes are over-edited, Cooper's villain is a snooze, and there's simply not enough sex and death in an origin story about the archetypal sexual predator. Instead, there's a predictable attempted-rape scene, and a lot of paradoxically plodding hints that Mehmed and the Turks weren't that into women. There are also several scenes where Dracula turns into a cloud of bats, and even one scene where he scales a black cliff bare-handed while wearing a red cape, as if he were Wagner's Siegfried.

If you can selectively ignore this litany of inanity, you may find some substantial earthy pleasures in "Dracula Untold." Despite its PG-13 rating, the film does periodically erupt into surprisingly gruesome violence, like when a vampire is gored, then reduced into an emaciated corpse. And cinematographer John Schwartzman ("The Rock," "Armageddon") reminds you why Michael Bay used to love working with him in every day-for-night landscape shot. Evans is surprisingly good at smoldering, and special-effects-reliant shots of Vlad turning into a monster are usually pretty enticing. These small, moody charms add up, and give a film that sounds so very dumb some much-needed atmosphere. There's not much more to "Dracula Untold," but it does periodically throb with surface-deep tension. 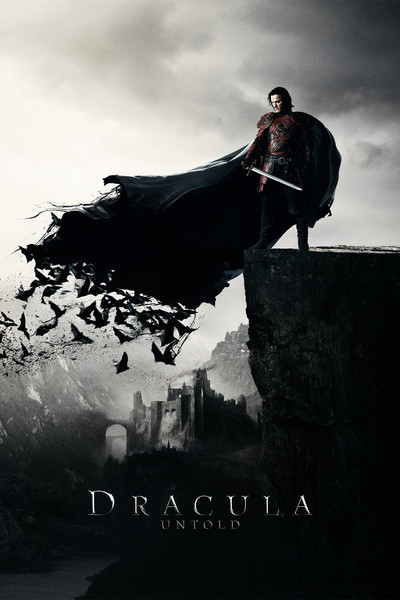