Alexander Payne's "Downsizing" starts with an intriguing "What if?...", the launch pad of all good sci-fi stories, and very quickly devolves into a bland story about a nondescript khaki-wearing guy who learns to care about the less fortunate. It's the least interesting way to go with what is a pretty interesting premise. The Nebraska born-and-raised Payne has always been interested in the Everyman, the regular guy caught up in extraordinary circumstances, but in "Downsizing," the possibilities of the imaginative scenario are mostly abandoned for this other totally banal theme. Good sci-fi works on its own terms, setting up the "rules" of the alternate world, and then carrying these rules out to their farthest reaching conclusions. How would one technological change affect humanity? How would consciousness itself change if such-and-such became possible? "Downsizing" is interested, sort of, in those types of questions, but the clichés have proven irresistible.

The film takes place in an era not too far in the future when a group of scientists in Norway have figured out a way to shrink human beings into five-inch-tall versions of themselves. The discovery is hailed as a revolution and a possible answer to the climate change emergency. If human beings take up less space, create less of a carbon footprint, make less trash, then perhaps the planet can be saved. Within a couple of years, "downsizing"—as the procedure is called—has swept the planet. "Downsized" communities crop up everywhere, with governments giving tax credit incentives to those who choose to go small.

An Omaha-based occupational therapist named Paul (Matt Damon) and his aspirational wife Audrey (Kristen Wiig) wonder if they should "go small" after chatting with some friends who took the leap. Paul's friend Dave (Jason Sudeikis) sits perched on a box of cookies on the kitchen counter, telling Paul—who hovers over him like a giant—how great it is to live a life of leisure with no financial worries. The biggest problem Paul and Audrey have in their lives is that they want a bigger house but can't afford it. (Welcome to the club, Paul and Audrey.) They decide to go for it, applying for a spot at Leisureland, a "downsized" community in New Mexico, hyped up to hopeful applicants with a promotional video starring married couple Jeff and Laura Lonowski (Neil Patrick Harris and Laura Dern), both wearing ear-mikes, doing marital "banter" in their echoing McMansion the size of a dollhouse about how awesome life is once you go small.

The "downsizing" process is shown in intriguing detail, and make up the best sequences in the film. They're imaginative and funny and detailed. People's gold teeth must be removed, otherwise their heads would explode during downsizing. All body hair is removed, too. These details support a logical universe (it would have been funny to see some of the disastrous early attempts to "go small," a tiny man trailing a beard 20 miles long, etc.) When Paul wakes up in the recovery rooms of Leisureland, he learns that Audrey backed out at the last minute. (Unfortunately that also means Wiig has exited the movie.) Paul now must make it through Smallville on his own. His party-hound Eurotrash upstairs neighbor Dusan Mirkovic (Christoph Waltz, doing his typical schtick) tries to get him to have some fun with being small. Paul instead is drawn to Ngoc Lan Tran (Hong Chau), Dusan's Vietnamese cleaning lady (whose escape to America in a television box caused an international incident.)

Through Ngoc Lan, Paul learns of the darker side of Leisureland, its rigid and racist class system, the built-in haves and have nots of our world make up Leisureland too. Ngoc Lan lives in a rundown tenement complex outside the "Truman Show" walls of Leisureland. She takes care of everyone, bringing food to the hungry, medicine to the sick. She enlists Paul's help in this. She will not take No for an answer. Paul is drawn along, against his will, into a world where helping other people—because it's the right thing to do—is the norm.

There are a lot of problems with all of this. Because Ngoc Lan is such a strong character, and Chau is so funny and strident and bossy, she takes over the entire film. Easily. Matt Damon doesn't stand a chance. This may be the whole point, but it makes for really unbalanced viewing. Every "Everyman" needs to have some "oomph" of his own if he is going to occupy the center of a film. He is our "way in." We see the extraordinary world through his eyes. George Bailey in "It's a Wonderful Life" is the ultimate "Everyman," and his journey from depressive resentful sacrifice to the redemption of human belonging is still searingly powerful today, because he seems like a real man, we can identify strongly with his experiences. But Paul in "Downsizing" barely registers onscreen. Normally I dislike it when people say "It would have been a better movie if this interesting side character had been the lead character instead" because there's no guarantee that it would be a better movie. But here, it's so clear that almost everyone onscreen—Dusan, Ngoc Lan, even the lost wife Audrey—is a more interesting and fleshed-out character than generic Paul. As an Everyman, Paul is a dud.

The premise of "Downsizing" has some similarities to Ari Folman's great 2014 film "The Congress," which also takes place in a future close enough to our own it sets off disturbing echoes. In "The Congress," technology can turn human beings into their own avatars, unleashing infinite computer-generated and cartoon doppelgangers, so that the "original" is completely lost in the replications. Through technology, humanity has chosen obsolescence. Unlike "Downsizing," though, "The Congress" pushes its initial premise into the outer reaches of possibility (so far out there that the entire second half of the film is animated). In taking its premise so seriously, in exploring the emotional ramifications of said premise, "The Congress" is a piercing cry of mourning for humanity's follies, for the mistakes we have made, for how carelessly we have treated the gifts we have been given. Paul, delivering trays of food to the Leisureland poor, just doesn't cut it.

But at least "Downsizing" features Udo Kier as a five-inch-tall retired sea captain. That's something you don't see everyday. 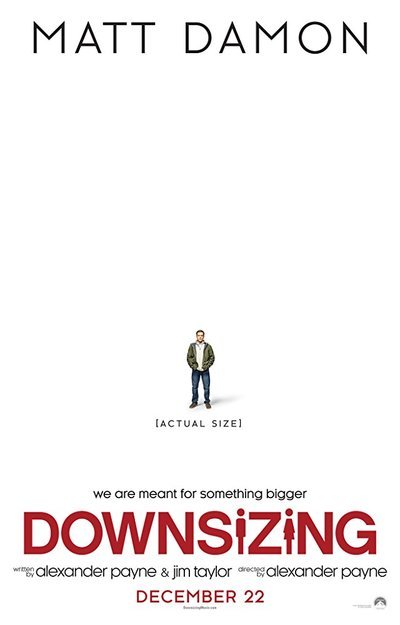 Rated R for language including sexual references, some graphic nudity and drug use.

Margo Martindale as Woman on Shuttle