Aleksey German’s aimless period drama “Dovlatov” is more concerned with unhurriedly observing the Leningrad of November 1971 in patches than rushing to bind together its social patterns. This is a world of artists and thinkers of all stripes, continually told what they can’t do, say, write or take interest in (like the works of Jackson Pollock) under the close-watch of Leonid Brezhnev’s Soviet Union. And it builds and builds with no perceptible destination in mind—in fact, it took me a while to accept German’s fogginess and settle into his film’s drifting rhythm that, for a long time, seemed like it was searching for something to say. With its script (co-written by German and Yulia Tupikina) that lacks the traditional structure of a three-part act, “Dovlatov” managed to evoke in me an overall feeling of internment. Along with it crept in a gloomy mood, gradually formed through the collective frustrations of the time’s hampered dwellers.

Plunging the audience into a hazy and snow-covered trance, German’s character study follows a week in the life of one such burdened occupant. He is Sergei Dovlatov (Milan Maric, remarkable in an otherwise forgettable package), the iconic and much-celebrated (albeit, way too late) Russian writer of Armenian and Jewish decent, who didn’t quite find the fame and acceptance he deserved during his short life of 48 years. In a troubled marriage with his wife Lena (Helena Sujecka) and a good father to his daughter Katya (Eva Gerr), the young Dovlatov lives with his mother while he routinely receives a series of rejections on his manuscripts from literary officials.

Having era-appropriate, sociopolitical interests around uncovering the truth within public structures, Dovlatov hits wall after wall in a country prepping to celebrate the approaching anniversary of the Revolution, but failing to invest in its greatest intellectual minds. His mother reminds him early on that he is nobody unless he gets published. Yet Dovlatov shows no desire to abandon his principles just to score a spot in the Writers’ Union. Hence, he gets stuck with pointless reporting for a factory newspaper that only serves propagandist purposes; a job he loses in due course due to his dignified idealism. His closest comrades seem to be doing no better. Among his fellow sufferers are writers Joseph Brodsky (Artur Beschastny) and Anatoly Kuznetsov (Anton Shagin), both hungry for the kind of freedom of expression they know they won’t be granted.

I wish I could tell you “Dovlatov” gets enlivened occasionally with flourishes of energy and wit. (It doesn’t.) Despite a story that traffics lively jazz clubs, fiery literary scenes and conceptually textured streets, German’s film doesn’t quite know how to let the audience in, with an insistent voiceover (heavier in the early moments) overwhelming the tableaux. The most absurdly memorable segment of “Dovlatov” arrives early on, when our frustrated hero on an assignment speaks with actors at a shipyard—they portray legends like Nikolai Gogol, Leo Tolstoy and Fyodor Dostoevsky and comment on the current state of affairs in a dutifully positive manner. Along the way, a tragic, out-of-nowhere suicide (of a writer who can’t face yet another rejection) occurs to our distress and an especially gut-wrenching discovery of children’s remains from the World War II injects deeper historical context into the story. Still, these weighty moments fail to reach their dramatic potential under the film’s overall emotional chill.

Celebrated cinematographer Lukasz Zal thoughtfully shoots German’s expansive physical and political landscape, captured by Elena Okopnaya’s detailed production design. The sound design pays special attention to background mutterings, aiming to immerse the audience in the era. Yet Zal, whose black-and-white lens spectacularly elevated Pawel Pawlikowski’s stunning “Ida” and does wonders for the same filmmaker’s upcoming (and equally wonderful) "Cold War," somehow washes out the film with a frustratingly muted palette, while trying to underscore the dream-like quality of the story. While “Dovlatov” obliquely recalls the visual qualities of the aforementioned films, it can’t match their decisive artistry. (I honestly wondered whether monochrome would have served German’s film better as well.) The end credits remind us of Dovlatov’s late-success, which he briefly found and enjoyed after he immigrated to New York City in 1979, where he concluded his tragically short life. If only the six days we spent in his presence weren’t so lifeless and managed to reflect his untapped literary greatness to superior effect. 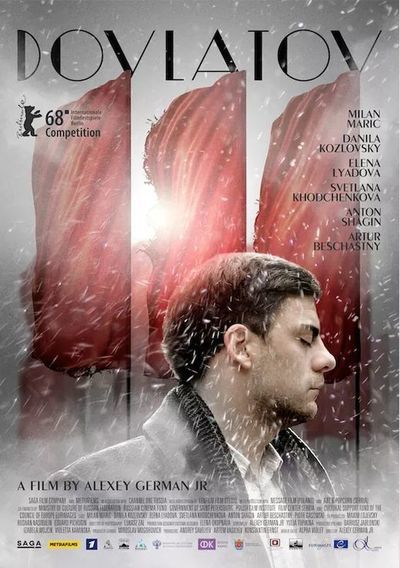