Thanks to my husband, a big History Channel buff, I became intrigued by a show that was provocatively called “The Naked Archaeologist.” Imagine my deep disappointment when I discovered that not only isn’t the host of the series in the nude, but instead he strips down biblical stories and investigates how true they are by scouring the Middle East for evidence pro and con. Nothing wrong with that, but I was hoping for at least a little "Magic Mike" action mixed in with the religious sleuthing.

I am guessing that director Jared and Jerusha Hess—the Mormon spouses who previously co-wrote  “Napoleon Dynamite” and “Nacho Libre,” two endearing odes to misfits, and “Gentlemen Broncos,” a not-so-endearing ode to misfits—might have been as duped as I was and caught the series at some point. That is because their latest oddball opus, “Don Verdean,” concerns a so-called biblical archaeologist (Sam Rockwell) who has dedicated himself to unearthing Holy Land relics that will bolster the beliefs of Christian worshipers.

Matters get off to an amusing start with cheesy video footage of Don on the lookout for Samson’s burial site but the locale ends up being an empty hole. However, he gets a hot tip that there is another spot that might contain something meaningful. Sure enough, he locates a pair of 3,000-year-old shears—the very ones that were used on the strong man’s locks, as luck would have it. Maybe a little too much luck.

Ten years later, Don is preaching to a diminished choir at a U.S. church. His standing, if he ever had one, has been reduced by claims made by accredited researchers who say his finds are shams. But a new patron pops up, a onetime sinner named Rev. Tony Lazarus (Danny McBride) who is now a believer along with his ex-prostitute wife (Leslie Bibb) and is willing to finance new expeditions that will allow him to bask in the publicity and build an American version of the Holy Land. Wouldn’t you know, Don knows of a pillar of salt that is thought to be the womanly form of Lot’s wife. Unfortunately, she also sports a not very female appendage. Nonetheless, the reverend’s flock falls for it. After all, Don has declared the figure to be “97 percent sodium chloride.”

But he, along with his assistant Carol (Amy Ryan, who seems to be the only actor giving a whole-hearted performance) and Israeli overseas helper Boaz (Jemaine Clement of HBO’s "Flight of the Concords”), is in over his head when he tries to pass off a stolen skull as belonging to Goliath the giant. That leaves him vulnerable to blackmail and, sure enough, the opportunistic Boaz is more than ready to take advantage of Don’s deception, especially since he has eyes for Carol.

There is a mere smattering of humorous conceits, such as when a deadpan Bibb sings a self-penned ditty about Lot’s wife and her lack of marital obedience with such lines as, “Pillar of salt, it’s all her fault. She should have listened when her husband shouted, ‘Halt!’ ” Or when McBride’s Lazarus suggests that Don go after “the Holy Grail of biblical artifacts – the Holy Grail.” Will Forte shows up as a former Satanist who sees signs of evil in double-entendre cereal names such as Grape Nuts and Banana Nut Crunch.

But it is more funny strange than funny ha-ha when Carol confesses to Don that she has a grown son, the result of a “youthful indiscretion,” who is in prison on marijuana possession charges. “Sometimes I feel like that French whore in ‘Les Miserables,’ ” she says, duly miserable.

But matters truly go off the rails when Clement, complete with goofy accent and dopey dance moves, suddenly turns into the center of attention. If you don’t trust in your star, why should we? The strangest thing about “Don Verdean” is how Rockwell’s deep reserve of kooky eccentricity that is usually his calling card is hardly tapped while allowing his character’s impact to eventually flatline. Is Don a pious fool or is he a conniving schemer? Is the answer in the Bee Gees song that ends the movie, “I Started a Joke?” Is the punchline intentionally missing?

There is a discount rate feel to the whole production (primarily shot in the filmmakers’ native Utah), which wouldn’t matter if the script were packed with surefire laughs. There is little that is worse than satire that tiptoes around its subject, as if risking offense were a sin.

I kept thinking one thing during most of “Don Verdean": What would Christopher Guest do with his company of ace ad-libbers with such material? And the answer suddenly came to me—probably toss it in the trash and start all over again. 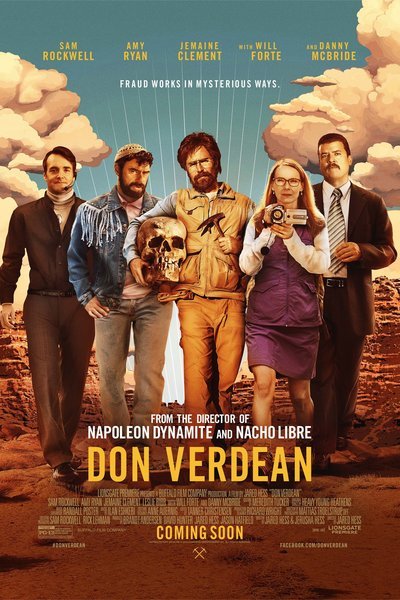 Rated PG-13 for crude and suggestive content, some language and brief violence.

Will Forte as Pastor Fontaine