The inevitable DVD of "Divorce Corp" will make an ideal gift for anyone who's been through a painful, expensive split-up. Directed by Joseph Sorge, whose web site offers a tie-in book, it's billed as "A shocking exposé of the inner workings of the $50 billion a year U.S. family law industry" that "shines a bright light on the appalling waste, and shameless collusive practices seen daily in family courts."

Those intensifiers should tell you what you're in for. "Divorce Corp" is less a nuanced documentary than a cry of rage. It's easy to imagine people who've shelled out a small fortune during a contested divorce, with or without kids underfoot, watching this film while nodding their heads and muttering, "Amen. Stick it to 'em."

Although it sometimes wanders off the righteous path to recount a depressing or perverse anecdote at length—such as the tale of a ridiculously expensive child custody evaluator who bragged of drug use and unprotected group sex on Facebook—for the most part it's a stylistically bland work. "Divorce Corp" is directed and edited at roughly the same level of imagination as a network newsmagazine story: talking head, talking head, talking head, cut to a chart, exterior shot of a courthouse, cut to another chart, talking head, capped by a segue along the lines of, "And if you think that's shocking, wait'll you hear this."

Any wit it exhibits is of the slow-twisting-of-the-knife variety. A sequence that picks apart the undefined legal phrase "the best interest of the child" is scored to a section of "March of the Sugarplum Fairies." Animated re-creations of witnesses' stories contain odd moments of caricature, as when a faceless stick figure representing a child custody evaluator takes a parent's hard-earned money and bolts like a cartoon swindler trying to make the next train out of town.

That said, I'd be shocked if anyone involved with "Divorce Corp" gave the briefest thought to making an artistic statement. This picture is just a statement, period—something like, "Divorce in the United States is needlessly complicated, expensive, unfair, and sometimes corrupt. Won't someone do something about it, for pity's sake?"

The damning facts and figures keep piling up, along with horror stories that give them human faces. The average contested divorce in the United State of America costs $50,000. Lawyers on both sides of a case crank out redundant paperwork, unnecessary motions and pointless letters because they get paid by the hour. Costs climb so high that soon-to-be-former spouses have to sell cars, houses and other possessions to pay legal fees, and sometimes judges pre-emptively denude their net worth by placing liens on their property. Nobody involved wants to end what this movie calls "the revenue stream." Judges are officially or unofficially in bed with lawyers for both spouses, as well as the various experts they assign to cases. It's a mutual backscratching thing. If the judge takes care of these people today, once the judge retires the recipients of largesse will take care of him, perhaps by hiring him to serve as a mediator or consultant.

Adding incompetence to corruption, the family court system is a steaming mess. Its various sections aren't governed by constitutional edicts that other institutions must follow. Power-tripping judges can indulge God complexes by lashing out against plaintiffs who protest their decisions. At one point the film tells of a man who wrote about his experiences in family court online and was ordered to delete his blog by the judge overseeing his divorce. This is but one of many examples the film gives of judges behaving like old-time ward bosses or petty gangsters. There are no stories in "Divorce Corp" of fair judges or decent lawyers or government employees who are good at their jobs, and little analysis of the larger systemic problems that might account for some of the horror stories. It's not that kind of film.

The fact that "Divorce Corp" is railing against targets that it's safe to hate (cold-hearted and anonymous institutions, incompetent evaluators, sleazy lawyers, corrupt or petty judges) gives it darkly exhilarating quality. If you want to let off steam, it's cheaper to go out into a field and scream your head off than to buy a ticket to see it; but then you wouldn't have the pleasure of seeing prominent lawyer Gloria Allred admit on camera that the goal of most attorneys in divorce cases is to "paper the other side until they can't take it anymore." If this movie were a person, it would be the kind of person you'd avoid because you fear he might explode one day and you'd rather not be there when it happens. 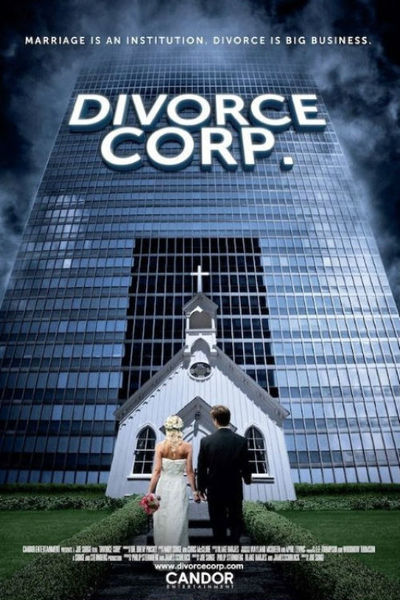 Gloria Allred as Herself

Lynn Toler as Herself

Laura Wasser as Herself

Mark Byron as Himself

Steve Hitner as Himself

Ulf Carlsson as Himself

Alexandra Borg as Herself