"Dirty Weekend" is a decent idea for a low-budget movie that never gets past the idea stage, and after a brief while, you may start to question whether it should have been a movie at all, much less a 90-minute one.

Matthew Broderick and Alice Eve play coworkers who get stranded in Albuquerque, New Mexico during a business trip. Broderick's character, Les, becomes obsessed with leaving the airport to go on a shopping trip. He clearly has a secret agenda, and Natalie accompanies him as his minder, needling him along the way to get him to reveal what all the fuss is about, and justifiably complaining that he is an evasive man who has a problem telling the truth.

The above paragraph does not describe the first few minutes of the film, but the first half-hour.

Another hour or so later, we've learned Les's secret. It's about as unremarkable as can be, and probably not that far from what you imagined the first time the film introduced the possibility that something happened to him in Albuquerque. Along the way, Natalie—established early on as a lesbian, to blunt any expectation that she might end up sleeping with Les—reveals a secret of her own. This secret is also, in the grand scheme of things, pretty mild, unless you disapprove of any sexual behavior between consenting adults that is not of the plain vanilla variety. Not once does a character say or do anything memorable or even especially surprising.

LaBute made his bones with eloquently nasty, often downright morally ugly movies like "In the Company of Men" and "Your Friends and Neighbors" before moving into less easily pigeonholed fare, including "Nurse Betty," "The Shape of Things," a bizarre remake of "The Wicker Man," and a hilarious (really) remake of the English comedy "A Death at a Funeral." To say he's been hit-and-miss would be an understatement, and his butterfly-collection approach to characterization has understandably not been to everyone's taste. But in the past he's always given viewers something to react against; you might not love everything, or even anything, he was doing in any given scene, but at least you didn't sit around waiting for something more than faintly interesting to happen, which is the case throughout "Dirty Weekend."

Not once does LaBute do anything with the camera besides use it to photograph actors saying his lines, in locations that hold no thematic, architectural or any other interest. Broderick and Eve are excellent, but they can't save the movie because LaBute gives them little to latch onto. The cinematic and dramatic value of this film is close to zero. If it were actively bad, or ostentatiously pretentious, at least it would get your blood pumping, but instead it's passively bad—the kind of movie that seems to have no particular opinion on anything it's showing you, or on its own existence. If it were an anecdote, it would be one that went on for quite a long time, until the listener interjected, "Why are you telling me this?" 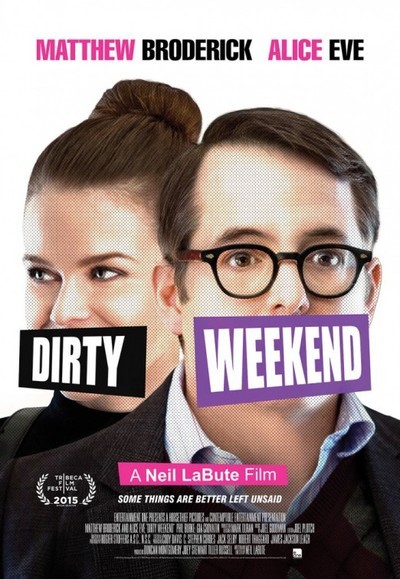