For those who like their romance movies filled with unnecessary mysteries, murdered dogs, poached lobsters and the ghosts of deceased little girls, “Dirt Music” will fit the bill. All others need not apply, not even if you’re into the kind of Nicholas Sparks-style drama this movie shamelessly marinates in for an interminable 105 minutes. Director Gregor Jordan’s Australia-set potboiler plays like “Wake in Fright” meets “The Notebook”; the toxic masculinity of several characters wreaks havoc before one guy reveals a softer side that bends toward true love as a means of assuaging his guilt.

And make no mistake, there’s a lot of guilt in this movie, most of it perched on the shoulders of our romantic co-lead Lu Fox (Garrett Hedlund). Lu is the mystery man on the cover of an old-timey bodice ripper, the type of rugged-looking former musician who chains his stolen dog to his truck on the beach while he poaches lobsters. He’s the kind of dude for whom chivalry won’t allow the acknowledgement that our other romantic co-lead, Georgie (Kelly Macdonald) is butt nekkid when he discovers her floating in the sea. “I thought you were a body,” he says to her. “You bet I’m a body!” I hoped she’d respond. No such luck, though far cheesier dialogue awaits us. To explain why he quit playing music, Lu tells Georgie that “music will undo you. It makes you forget, takes you somewhere else.”

That “somewhere else” is a gorgeous, middle of nowhere located in Western Australia, but I’m getting ahead of the story here. Georgie is in some kind of relationship (she denies it is marriage) with Jim (David Wenham), a jealous, moneyed type who apparently owns every creature in the sea, including the ones Lu catches. The town loves Jim but doesn’t take kindly to Georgie because she’s not from ‘round these parts. The townsfolks’ hatred runs so deeply that they won’t allow Georgie, a former nurse, to examine one of Jim’s men who has been gruesomely injured on his boat.

There’s no credible explanation why Georgie is here. She doesn’t appear to be trapped, except when it’s convenient to the plot. She doesn’t love Jim and the feeling seems to be mutual except, again, when it’s dramatically convenient. It’s implied that Georgie feels a maternal affection for Jim’s two young sons, who see her as a mother figure after the death of Jim’s first wife. Once Georgie gets into some fully-clothed rumpy-pumpy with Lu, however, all replacement Mommy bets are off. Immediately, Jim steps into the expected role of violence-prone, jealous lover. “As soon as he touched you, his hand should have f--king burned!” he yells at Georgie. Now, that would have been worth seeing.

While I admit that contrivances and coincidences are often necessary in drama, the ones delivered by screenwriter Jack Thorne’s adaptation of the Tim Winton novel are preposterous. Among other things, you just know that Lu and Jim are going to be connected somehow. Perhaps it involves the aforementioned deceased little girl, Bird (Ava Caryofyllis). Bird was Lu’s beloved niece, the daughter of his brother and sister-in-law. The latter two formed a group with Lu, and the band’s songs play on the soundtrack and in flashbacks that do nothing to flesh out these characters. One song in particular is used so much you begin to feel trapped in a broken jukebox. Its final use is, I kid you not, an incredibly warped homage to Cameron Crowe’s “Say Anything.”

Bird haunts Lu’s memory, so she keeps popping up every time the movie needs to score unearned character development points for Lu. It’s distasteful at best, as we know nothing about her and she’s just a device. Normally, it’s the parents who get visitations from their dead children, but here it’s the uncle, which is simply not as compelling. I’d love to explain that point further, but it would require me revealing the spoiler circumstances of her death. Suffice it to say, Bird’s ghost shows up so many times she’d make that little girl from “The Ring” jealous.

When Lu gets a can of whup ass opened on him, presumably for engaging in games of Georgie Porgie, he heads out for parts unknown to—I don’t know—mourn in solitude? You need a boat or a plane to get where he’s going, something Georgie finds out when she opts to pursue him. Since nobody in “Dirt Music” is written as anything but a conduit for its tonal twists and turns, there’s no weight to what its main characters do for love. Hedlund, so charmingly roguish in “Mudbound,” has none of the magnetism he showed there. Sure, he takes off his shirt a lot, which will be eye candy for many, but his character far too often looks like he smells funkier than a Parliament album. There’s an audience for that, to be sure, but if you’re looking for chemistry between the two pretty leads, you’ll be in short supply.

Upstaging everyone is the gorgeous scenery of Western Australia. Cinematographer Sam Chiplin’s work is jaw-dropping even on the small laptop screen I viewed “Dirt Music” on, and the underwater shots by Rick Rifici are as equally graceful and majestic. It’s too bad the actors are stranded in front of nature’s majesty while being forced to go through these awful plot motions. Macdonald gives her all, and it’s rare that we get a film where someone other than an ingénue is given a much-needed romantic pursuit. But the clichés are so poorly handled that Georgie’s actions come off solely as that tired trope of a strong woman finding her strength while trying to fix a broken man who isn’t worth her time. 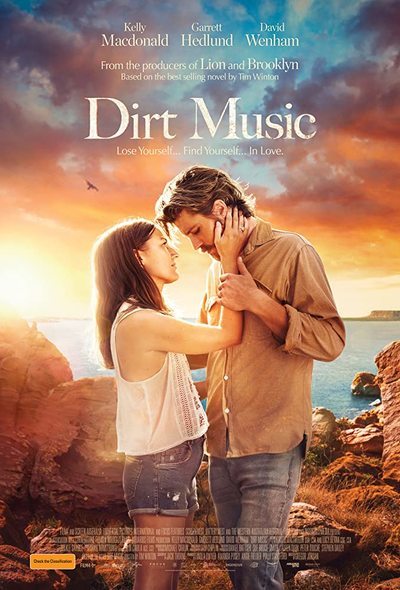