Watching "Detroit," the latest film directed by Kathryn Bigelow and penned by Mark Boal, I hit a breaking point I didn’t realize I had. I was disturbed so deeply by what I witnessed that I left the theater afterward in tears.

It wasn’t the relentless violence inflicted upon black bodies or the fiery devastation of the riots ripping apart Detroit but the emptiness behind these moments that got under my skin. Watching “Detroit” I realized that I’m not interested in white perceptions of black pain. White filmmakers, of course, have every right to make stories that highlight the real and imagined histories of racism and police brutality that pointedly affect Black America. There are, of course, a litany of films by white filmmakers about subject matter unique to the black experience that I find moving—“The Color Purple” comes to mind. But Steven Spielberg’s film was based on a novel by Alice Walker and produced by Quincy Jones. “Detroit” was directed, written, produced, shot, and edited by white creatives who do not understand the weight of the images they hone in on with an unflinching gaze.

“Detroit” is ultimately a confused film that has an ugliness reflected in its visual craft and narrative. Bigelow is adept at making the sharp crack of an officer’s gun against a black man’s face feel impactful but doesn’t understand the meaning of the emotional scars left behind or how they echo through American history. “Detroit” is a hollow spectacle, displaying rank racism and countless deaths that has nothing to say about race, the justice system, police brutality, or the city that gives it its title.

The film builds up to an extended sequence based on a real event, a police raid at the Algiers Motel in 1967 Detroit that resulted in the deaths of three young black men and the beatings of nine other people, including two white women. There is a shagginess to the narrative as it opens, giving a portrait of the civil unrest and riots that dominated Detroit at the time before placing the variety of characters introduced into a powder keg of a situation at the Algiers Motel. After the blood has dried and scars began to heal for the survivors, the narrative dashes through the investigation, trial, and aftermath of that night. There is an increasingly heavy reliance on newspaper clippings and actual newsreel footage meant to provide meaning and gravitas that only highlights the lack of a thematic center to grant the film any weight.

Bigelow has made a career out of zeroing in on the particular textures of American masculinity. It’s one of the reasons I particularly love her earlier work whether that be the sublime and unapologetically silly “Point Break” or the gloriously intense “Near Dark.” It’s this history that makes the surface level understanding of character so glaring. The film gestures at the ways black and white men are pitted against each other but doesn’t reckon with the historical lineage this conflict rests in. Consider when the two white women—Julie (Hannah Murray) and Karen (Kaitlyn Dever)—are found hanging out with a black man recently honorably discharged, played by Anthony Mackie, just as the raid on the motel begins. This gets into complex territory about stereotypes of black men, the perceived value of white women, and white men’s fear that the film doesn’t know how to address meaningfully.

While John Boyega has been top-billed for his performance as Melvin Dismukes, a security guard who stumbles into aiding the blatantly racist cops and armed forces that realize the civil rights violations happening but do nothing to stop it, he’s too passive a character to leave much of an impression. In standing by his position as an authority figure and helping these white cops, Melvin becomes complicit in their horror. Boyega is a charismatic actor, but he gives a flat performance, although it’s the script that’s more of a problem. Mark Boal skirts around the issue of Melvin’s complicity, leaving an interesting story on the table. The standout from the cast proves to be Algee Smith, who grants his character a soulfulness and yearning that grows more heartbreaking as the film continues, but even his performance is often undercut by directorial choices.

There are plenty of examples of racism in the film, but it's William Poulter’s performance as Philip Krauss, a cop who becomes a ringleader to horror at the Algiers Motel, that’s the most sickening. Krauss is quick to violence, virulently racist, and immensely cunning. He delights in beating the black men who realize he’s abusing his power but can do nothing to stop him even as dead bodies pile up. Bigelow doesn’t flinch from depicting Krauss’ horror, but she also doesn’t thoroughly indict him or the systems that allow men like him to survive.

Before the film’s release, a lot of fury was unleashed when it became clear that black women wouldn’t be important to the story. Films about black history seldom grant black women the importance they deserve. In “Detroit,” they are in the margins. They’re dutiful wives placing a gentle hand on the shoulder of their husbands; they’re silent spectators in courtrooms; they’re sweet motel clerks with no real weight in the story. An elder black female character voices dialogue that is the closest the film gets to any commentary: “No way would they do this to white men,” she says angrily to a news reporter hungry for a good pull quote.

But “Detroit”’s disinterest in black women, despite significant time spent beyond the Algiers Motel, is the least of its problems. What leaves the film feeling grotesque and even a bit exploitative is its soullessness. I’ve had a theory for some time that you can determine how well a film will handle its black characters based purely on how it’s shot. Black skin tones vary widely, but here they’re often ashen, sickly, and lacking the complexity they deserve. Cinematographer Barry Ackroyd hews toward a psuedo-documentary style that is perpetually in jittery, confusing motion. Bigelow and Ackroyd excel at creating tension until the Algiers Motel incident takes on the tenor of an extended trip into purgatory. The sweat and blood that drips down the characters' faces are granted such texture and focus I could practically smell them wafting from the screen. Bigelow is immensely skilled at action, and watching Philip pick off his victims definitely crackles with energy. But there is a noxiousness to the thrill of these scenes and the extreme close-ups of bruised black bodies, because the characters lack interiority.

The soullessness of the film only snapped into focus for me near the very end when one of the survivors, Larry, is shown singing at church. The church is important to the black community both as an emblem of hope and resistance. But this scene is shot exactly like the most disturbing moments at Algiers Motel. The camera moves much like a boxer. It bobs and weaves staying perpetually in motion. There is an anxious energy and bluntness that feels out of place as Larry sings in front of the black congregation.

When I left the theater, I overheard a black filmgoer say repeatedly, “This is still happening. This is still happening.” I only looked at him briefly, but in his voice there was a weariness and disappointment I felt myself. Given how nothing has really changed in America for black folks, “Detroit” had the potential to be a valuable, even powerful, piece of art that could speak truth to power. But it lacks the authenticity necessary to become that. Bigelow and Boal don’t shy away from showing how loathsome Philip and his cohorts are. But they don’t go so far to indict them or grant enough context to their actions. There are also brief, disconcerting moments that present some white cops in a great light. Ultimately, I was left wondering who is this film really for? The filmmakers aren’t skilled enough to understand the particulars of blackness or bring the city of Detroit to life as another character. What is the value of depicting such nauseating violence if you have nothing to say about how that violence comes to pass or what it says about a country that has yet to reckon with the racism that continues to fester within its very soul?

“Detroit” is presented as a valuable portrait of a bloody, violent, and important moment of American history. The epilogue detailing what happened next for everyone involved over pictures of the real-life versions of the characters and story gestures at vital commentary about racism that the filmmakers never get a handle on. Bigelow, Boal, and their collaborators are unable to meaningfully parallel this event to the present-day happenings they mirror. Watching “Detroit,” I didn’t see a period drama, but a horror film. The horror of white filmmakers taking on black history and the violence perpetuated upon black bodies with an unwavering eye yet nothing to say. 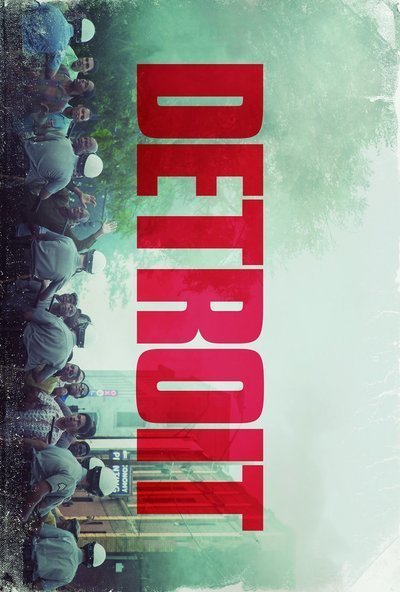 Will Poulter as Krauss