At the nasty center of the otherwise dutiful “Denial” is a slimy, self-aggrandizing upper-class blowhard of a bigot who believes he has every right to circulate hateful and hurtful falsehoods to his followers—including white supremacists and Neo-Nazis—without suffering consequences or being called out for his actions.

That might sound somewhat like déjà vu to anyone who has been following the ongoing presidential campaign. But apparently the notion that a lie repeated often and loudly enough will somehow magically become a fact is not a new tactic.

As despicable as the “birther” movement might be, the historical event that is being negated in this morally-charged legal procedural is a whopper way beyond the usual pale: That Adolf Hitler never ordered the extermination of six million European Jews during World War II. In other words, the Holocaust didn’t exist.

I doubt the filmmakers, including seasoned director Mick Jackson (whose varied resume includes 1992’s “The Bodyguard” and 2010’s HBO biopic “Temple Grandin”) and screenwriter David Hare (“The Hours”) knew that their timing would be so perfect eight years ago. That’s when they began adapting American academic and author Deborah E. Lipstadt’s first-hand account of the 1996 libel lawsuit brought against her by British historian and Holocaust denier David Irving.

But despite two terrifically nuanced performances by its male leads and a good try by its somewhat miscast female star, the simmering dramatics behind “Denial” never quite reach a satisfying boil of righteous indignation and justice served that was felt in last year’s similar “Spotlight,” the expose about the uncovering of the Catholic Church’s pedophile priest scandal.

The film opens with the first public encounter between Lipstadt (Rachel Weisz, exuding intense intelligence yet too soon turned into a bystander) and Irving (Timothy Spall, greedily soaking up the attention and grandly oozing smug know-it-all-ness from every pore). The bluntly outspoken Queens native is appearing at a speaking engagement at Emory University in Atlanta, where she teaches Jewish studies, for her new book on Holocaust deniers. A scheming Irving, along with several video-shooting cohorts, crashes her lecture and tries to engage her in a debate. When she refuses to indulge him, Irving grabs center stage by offering $1,000—money in hand—to anyone who can show that Nazis killed Jews by gassing them at Auschwitz.

Soon after, Lipstadt learns that Irving is suing her and publisher Penguin for libel after labeling him a Holocaust denier in her work. That leads to a trial held in England, where—unlike the States—defendants are guilty until proven innocent. The burden of proof is on the good guys, which essentially means that the author and her legal team must somehow provide evidence that the Holocaust really occurred—no easy task since the Nazis made sure to destroy signs of their horrific genocide.

The story is primarily told from Lipstadt’s Yankee fish-out-of-water point of view—underlined by her heavy accent and rust-hued perm—a choice that ultimately keeps the audience at bay as well. Rather than having a single defense lawyer, the British legal system with its wigs and robes requires a solicitor (Andrew Scott, best known as Moriarty on TV’s “Sherlock,” as a defamation expert who once represented Princess Diana in her divorce and is tasked with coming up with the strategy) and a barrister (Tom Wilkinson, who singlehandedly elevates the third act with a towering display of human resolve, dedication and decency as a libel expert who presents the argument in court). But other specifics about the case cause Lipstadt even more consternation. She won’t be testifying even though Irving is acting as his own representative in court, no living Holocaust survivors will be called as witnesses (to save them from being humiliated by Irving, we are told, but you have to believe they have withstood far worse) and the lone decider of the verdict will be a judge instead of a jury.

While the lawsuit attracted rabid press coverage around the world, don’t expect a depiction of the kinds of colorful behind-the-scenes shenanigans that drove TV’s hugely popular “The People v. O.J. Simpson: American Crime Story.” Much like Lipstadt, viewers aren’t privy to the inner workings of the defense except in dribs and drabs. True, Irving comes up with a sort of catchy slogan akin to O.J. lawyer Johnny Cochran’s most memorable phrase, “If the glove don’t fit, you must acquit.” In this case, it’s “No holes, no Holocaust”—referring to the supposed lack of rooftop openings for the Nazis to drop poison pellets into gas chambers at concentration camps. The sight of reporters rushing out to call in the headline-ready refrain is meant to have us think that all might be lost. But if that were the case, there would be no reason for this film to exist.

What we do get instead is the rare location shoot in a non-documentary film at the actual Auschwitz. If Jackson does anything right, it is his solemn treatment of the visit made by Lipstadt and her lawyers to the site. First seen in the pre-dawn darkness with a blanket of snow and eerie pockets of fog, it is one of the few times that “Denial” vividly drives home what is at stake in this lawsuit. Add to that the footage of mountainous piles of shoes and eyeglasses encased behind glass as part of an exhibit, and it is difficult not to be at least partly invested in the movie’s outcome. These scenes, and the look of utter repulsion that washes over Wilkinson’s face as he refuses to make eye contact with Spall’s Irving while delivering his final verbal coup d’etat, are the saving grace of a film that too often denies its audience a chance to feel the same. 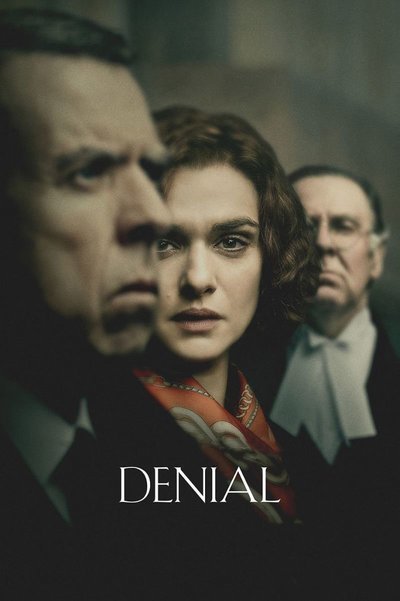